The ACLU used to be staunch defenders of “innocent until proven guilty” even for the most heinous of offenders. Not anymore.

In recent years, the American Civil Liberties Union, who used to be fierce advocates for free speech and due process have tossed those aside to align themselves politically with the Democratic Party dogma.

You can read Jonathan Turley’s article on “The New ACLU” that filed a lawsuit against Due Process rights on college campuses because “Orange Man Bad.”

Filing a lawsuit to oppose Due Process rights for students and faculty accused of sexual assault is pretty bad, but they did one better on Twitter on Thursday.

In response to the shooting of 18-year old Deon Kay in Washington D.C. on Wednesday, the ACLU tweeted, “DC police murdered Deon Kay yesterday. He was just 18 years old. His death is yet another painful reminder that violence and racism is endemic to policing in this nation. We demand justice for Deon and every life taken by DC police.”

ClashDaily covered the bodycam footage of the officer that shot Kay here:

YO, DC Protesters: Before You Chuck A Brick, Check Out This Video About Your BFF Deon Kay

It appears that the “innocent teen” was holding a gun and appeared to be raising it when he was shot.

With this tweet, the ACLU is tossing their hat in with the race-baiters and grifters who push the idea that “innocent black men are hunted by police” despite the facts of the case.

Note how some of the grifters post old photos of an obviously younger Kay to make him more sympathetic. It’s exactly what they did when Trayvon Martin was killed.

A young Black man life was suddenly taken way to soon. Join the family, friends and community of #DeonKay for a Vigil on September 5th, 2020. If you would like to donate cash app $chocolatedrip40 #Justice4Deon #BlackLivesMatter pic.twitter.com/TNiwVozAug

This is the kid the race soldiers in Washington DC shot in the back and killed today..Deon Kay.

The only thing more cowardly than shooting someone in the back, is ppl in a society who collectively justify state sanctioned executioners shooting teens in the back#AntiBlackWar pic.twitter.com/DA5lubt28R

This is also Deon Kay.

Deon Kay, the latest martyr of the Black Lives Matter movement. DC is rioting in his name. pic.twitter.com/l9cqhi1qTR

Look, teenagers post stupid things to social media all the time. Does that mean that he deserves to be shot? No, but raising a gun while running and a cop is yelling “Don’t move!” is a pretty dangerous course of action.

The ACLU is under fire on social media for how they’ve gone all-in for #Resistance. 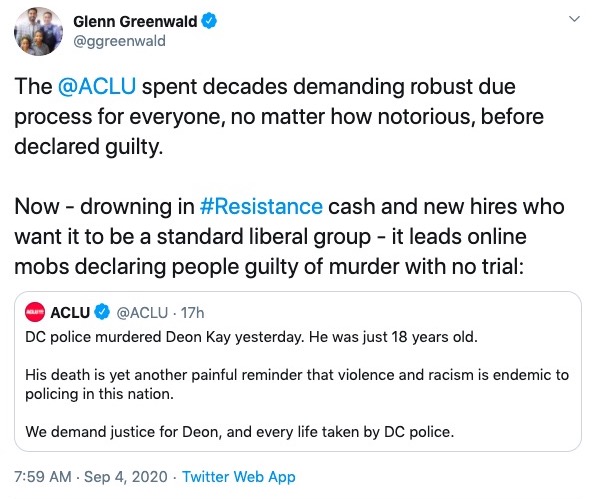 Mark Hemingway of Real Clear Investigations notes that the ACLU may have–rather ironically–exposed themselves to legal liability by calling a cop a murderer before an investigation has been completed.

ACLU deleted their tweet. I wonder if it was, ironically, because they realized calling a cop a "murderer" in this context exposed them to legal liability. I bet there's a police union lawyer looking at it right now. https://t.co/MNz9IyF45b

So, why do they do it? Because they can. It’s not like the Media(D) is going to call them out on their hypocrisy.

Tablet columnist Wesley Yang notes this “egregious tweet” by the ACLU is “following the path blazed by other legal luminaries.” He posted screenshots of big-name Democrat Senator Elizabeth Warren and Biden’s running mate, Senator Kamala Harris, are still saying that Michael Brown was “murdered” by police even though the Obama DOJ investigation under former Attorney General Eric Holder deemed that that is not true.

Any one of these statements would have been extinction level events under the pre social media standards of probity applied to public officials and institutions.

Social media is making everyone stupid–even the ACLU.