The Atlantic is making headlines for an article that they ran late on Thursday claiming that President Trump was disparaging of members of the military who died calling them “losers” and “suckers” in 2018.

The story comes from an incident during President Trump’s 2018 trip to France, he was scheduled to go to the Aisne-Marne American Cemetery and Memorial to lay a wreath, but it was raining heavily and the trip was cancelled. According to The Atlantic piece, President Trump “feared his hair would become disheveled in the rain”  and “he did not believe it important to honor American war dead” according to four anonymous sources.

In a conversation with senior staff members on the morning of the scheduled visit, Trump said, “Why should I go to that cemetery? It’s filled with losers.” In a separate conversation on the same trip, Trump referred to the more than 1,800 marines who lost their lives at Belleau Wood as “suckers” for getting killed.

Belleau Wood is a consequential battle in American history, and the ground on which it was fought is venerated by the Marine Corps. America and its allies stopped the German advance toward Paris there in the spring of 1918. But Trump, on that same trip, asked aides, “Who were the good guys in this war?” He also said that he didn’t understand why the United States would intervene on the side of the Allies.

Note how The Atlantic takes some shots here that President Trump has no concept of what happened in the First World War, as well as his alleged disdain for fallen soldiers.

These are some pretty damning claims against a man who is running for re-election to be the Commander-In-Chief, but The Atlantic couldn’t get one source to put their name on the record.

"They don’t want to be inundated with angry tweets and all the rest…"https://t.co/s2ESFCOMi0 — from @MikeBrestDC at @dcexaminer pic.twitter.com/IAANsJuIgH

He also posted a series of tweets on the same subject.

I was never a big fan of John McCain, disagreed with him on many things including ridiculous endless wars and the lack of success he had in dealing with the VA and our great Vets, but the lowering of our Nations American Flags, and the first class funeral he was given by our….

….John a loser and swear on whatever, or whoever, I was asked to swear on, that I never called our great fallen soldiers anything other than HEROES. This is more made up Fake News given by disgusting & jealous failures in a disgraceful attempt to influence the 2020 Election!

The “unnamed sources” in The Atlantic article seem to dispute the account given by former National Security Advisor, John Bolton, whose tell-all book was not too kind to President Trump.

The opening to the much-discussed Atlantic article, and the same events as described in John Bolton's memoir. https://t.co/1PQQXY8eoJ pic.twitter.com/JS32FJx9Ez

Here are the first two paragraphs of The Atlantic article:

When President Donald Trump canceled a visit to the Aisne-Marne American Cemetery near Paris in 2018, he blamed rain for the last-minute decision, saying that “the helicopter couldn’t fly” and that the Secret Service wouldn’t drive him there. Neither claim was true.

Trump rejected the idea of the visit because he feared his hair would become disheveled in the rain, and because he did not believe it important to honor American war dead, according to four people with firsthand knowledge of the discussion that day. In a conversation with senior staff members on the morning of the scheduled visit, Trump said, “Why should I go to that cemetery? It’s filled with losers.” In a separate conversation on the same trip, Trump referred to the more than 1,800 marines who lost their lives at Belleau Wood as “suckers” for getting killed.

Here’s the excerpt from Bolton’s book: 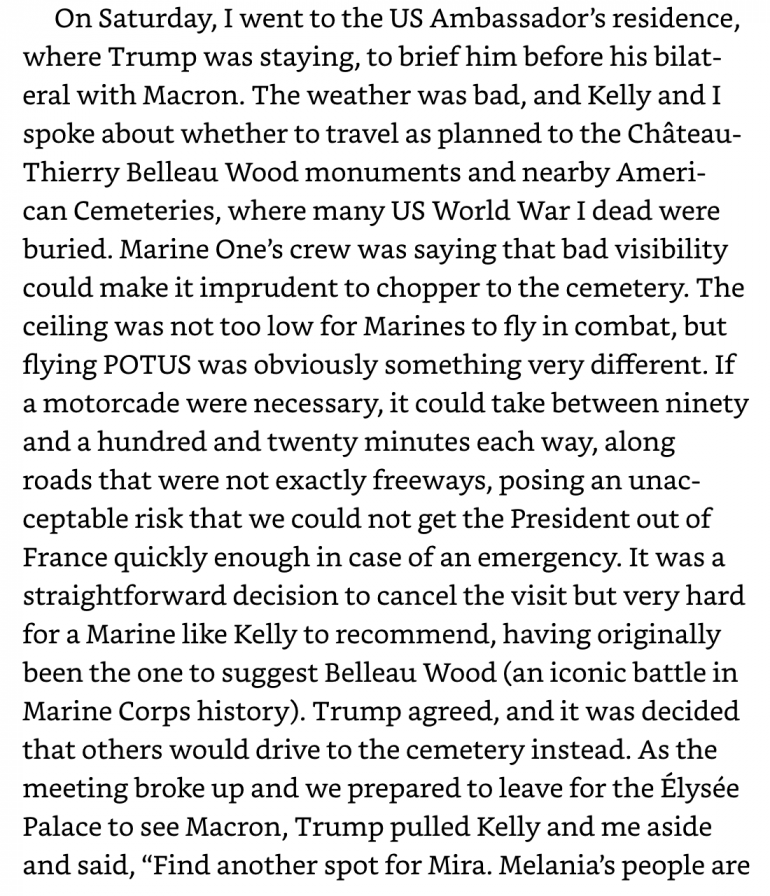 This account is corroborated by a White House official showing that “bad weather” was the reason for the trip being canceled.

Atlantic not backing down despite some pretty strong, on record denials from people who were there
“We stand behind our reporting," said Adrienne LaFrance, the Atlantic's executive editor.

Those who were there deny the claim:

These were some of the moments I witnessed the President show his heart and demonstrate how much he respects the selfless and courageous men and women of our military. I am disgusted by this false attack.

My response to the horrible lies from anonymous “sources” in the Atlantic: pic.twitter.com/uHtgJvrwCb

It’s very interesting that this story from 2018 is popping up now with just 60 days until Election Day, isn’t it?

Remember, this is how President Trump is when he meets families of fallen soldiers:

Fake News pushing a fake story about the military

Mike Pompeo Saw America's Biggest Issues, But Campus Clampdowns Chill Him to the Bone More Than Anything Else
June 14th, 2021 Flag And Cross

The Testimony That No American Should Overlook! (Video)
June 14th, 2021 Sons of Liberty Media