One reason that Leftists are so incensed about the passing of Ruth Bader Ginsburg goes right back to Roe v. Wade.

A ruling that is based on ‘penumbra’ was on a shaky legal footing to begin with and Leftists are afraid that an originalist court will give a fair hearing to arguments that might potentially diminish or overthrow the status quo.

For Democrats, this comes as a direct threat to their political power-base. After all, Planned Parenthood (and related groups and individuals) pour a firehose of political donation dollars into electing various candidates.

Virginia’s Governor Klan-face, for example, had $3M in Planned Parenthood donations. (As ClashDaily covered in this article when his yearbook and infanticide support were in the news.)

But why are ordinary people so emotionally wrapped up in this issue?

Well, for one thing, fear-mongers have whipped up a dystopian ‘Handmaid’s Tale’ world if the ‘secular sacrament’ of abortion faces any limitation whatsoever.

For another, they have been sold a bill of goods on what, exactly, abortion has done to improve life:

Nathanson admitted that fictional polls were created in order to convince the public of the need for legal abortion. He said abortion activists sold Americans the lie that thousands of women were dying annually from back-alley abortions, when the actual figure was in the hundreds. —LiveAction

As a result of the politics and the blatant manipulation, we have cosplaying activists carrying coathangers that represent the blank-eyed repetition of a lie debunked by its source, whipping up anger and anxiety in a whole generation of devotees intentionally indoctrinated into leftism by a politically-motivated education system. 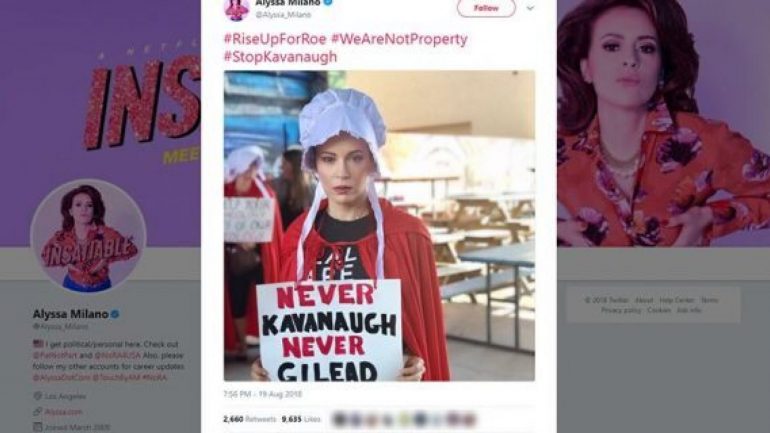 Should it surprise anyone that such a toxic cocktail produces a result like this poor brain-addled young woman?

She is SO pro-abortion that she wishes that she, "had been aborted."

Now that… that there's A HOT TAKE. ??? pic.twitter.com/l1KNdDZniK

Seriously? You’re so committed to abortion you wish you had been aborted yourself? Or maybe you are just saying that you feel as though your life has no meaning right now.

Politics, clearly, is the one thing she does NOT need more of at this point in her life.

What this girl needs right now, more than anything, isn’t a ruling on abortion, but a friend honest enough to tell her that she needs to take a break from social media and the political echo chamber she’s immersed herself into.

Put down the phone.

Get away from the city.

Take a day or two out in the country.

Walk among the trees.

Regain her sense of perspective.

If she really wants to see some change, meet people who have views different than her own. Find out that they are real people and not the imaginary cartoon villains she sees the TV talking heads ranting about.

…once you step beyond that narrow band of rage so many college students find themselves trapped in.

Study: Most U.S. Voters Would Fail Citizenship Test (Proving The Need For A Civics Curriculum)
June 22nd, 2021 The Lid