The anti-cop sentiment on the rise is dangerous–and this is why.

A man walked up and opened fire at the two officers sitting in their patrol car at the Metro Blue Line station at Willowbrook Avenue and Oak Street in Compton.

The L.A. County Sheriff’s office has tweeted about the incident, including a video of the incident.

Moments ago, 2 of our Sheriff Deputies were shot in Compton and were transported to a local hospital. They are both still fighting for their lives, so please keep them in your thoughts and prayers. We will update this thread with information as it becomes available.

Update: The gunman walked up on the deputies and opened fire without warning or provocation. pic.twitter.com/cBQjyKkoxJ

They have had surgery and Sheriff Alex Villanueva is at the hospital now. One has been described as a married 31-year-old mother of a six-year-old boy. The other deputy is a 24-year-old male.

During the press conference, Sheriff Villanueva said that the two deputies initiated radio contact after they were shot. They were transported with the assistance of other deputies,’ he shared.
Source: Daily Mail

The suspect is still on the loose.

A handful of Black Lives Matter protesters showed up at the hospital where the officers were taken and tried to storm the hospital and then block the Emergency Room entrances and exits.

The video begins with a man calling the two officers “two of America’s most notorious gang members” and “murderers.” When they were stopped by security to inform them that visitors were not permitted, several protesters made pig noises when officers refused to let them in, and shouted, “F*ck the police,” “We hope you die,” and “Y’all gonna die one by one,” and more derogatory phrases.

One of the protesters live-streamed the protest and the video was shared on YouTube.

In case it’s removed, the above video was also shared in a series of tweets by @selfdeclaredref.

After deputies issued a dispersal order for the unlawful assembly of a group of protesters blocking the hospital emergency entrance & exits, a male adult protester refused to comply & cooperate…

(3/3) The female adult, who was later identified as a member of the press, did not identify herself as press and later admitted she did not have proper press credentials on her person. Both individuals have been arrested for 148 P.C.

A priest who was at the hospital told ABC 7 News that the protesters had crossed a line by showing up there with their vitriolic hatred of police.

We shouldn’t be surprised.

It’s been six years of anti-police vitriol from BLM. They have been dehumanizing cops with their “All Cops Are Bastards” B.S. and put a target on the backs of all law enforcement officers.

Animals that must be hit hard! https://t.co/zrOd9ZUl8o

How long will it take for President Trump to be bashed for using the word “animal” to describe the coward that shot the deputies?

He’s not wrong–someone who does this isn’t a civilized human being.

Meanwhile, the people that support this behavior are no better.

This is BLM and what they stand for pic.twitter.com/Mup2e69RYn

The Gravel Institute, the left’s attempt to counter Prager University, deleted this tweet that says everything. 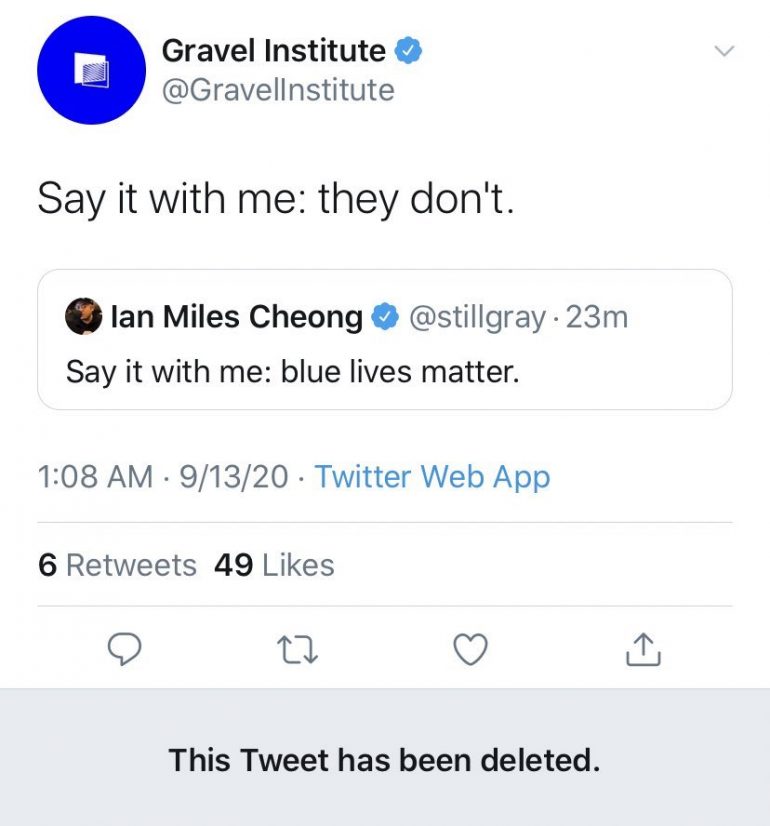 It seems that there are Biden voters who support violence against the police.

That should be all that you need to know about the left and what they stand for. Vote accordingly.