The hatred of law enforcement is so bad that a bystander who was near the attempted murder of two police officers just stood there and filmed the aftermath while laughing.

How a person could just stand there laughing and filming and not do anything to help people clinging for their lives is incomprehensible.

Earlier today, ClashDaily reported on the unprovoked shooting of two Deputies from the Los Angeles County Sheriff’s Department as they sat in their patrol car near a train station.

The officers both survived the shooting and were transported to the hospital. They both underwent surgery and it was reported that they were in critical condition.

Nothing had been reported earlier of their injuries, but there was speculation that both officers had been shot in the head.

That was confirmed today in the L.A. Times.

Sheriff Alex Villanueva on Sunday called the condition of the deputies a “double miracle.”

Law enforcement sources told the Los Angeles Times that at least one of the deputies was shot in the face and the other in the head.

Black Lives Matter protesters tried to storm the hospital and blocked the Emergency Room entrance and exit and yelled that they hoped the deputies died.

This makes the BLM protest look like a tea party.

This person was on the scene and started filming right after the deputies were shot. He has a very limited vocabulary, apparently and keeps dropping the slang “n” word saying that the deputies were “aired out”–a slang term for being shot.

He sounds thrilled when he says that it was “goin’ down in Compton right now!”

There is something wrong with our society when people like this standby casually as humans nearby cling to life. All the while the videographer would rather say “damn nigga got aired out” then save a life pic.twitter.com/2e6rI5KsbM

This person posted to his stories that he heard that his video went viral on Twitter and was asking for someone to send him the viral video. 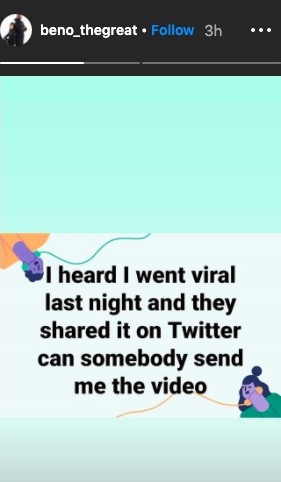 Apparently he was shamed into deleting it from Instagram and posting an apology. 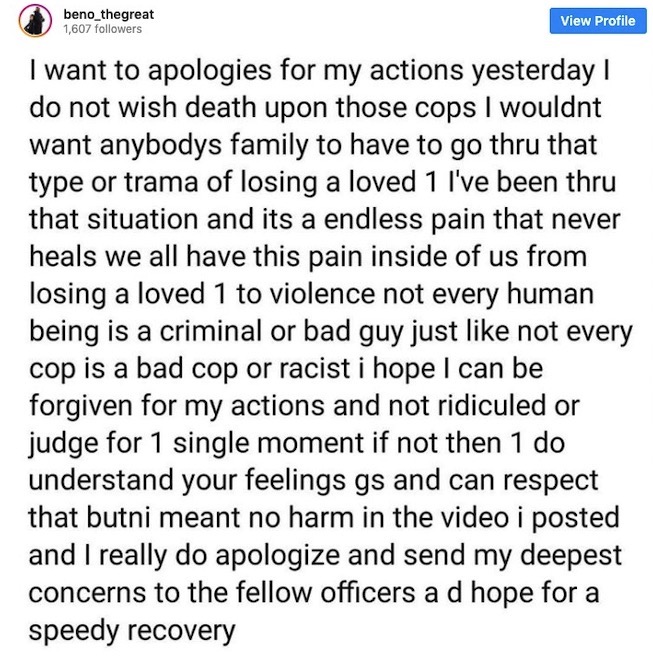 Clearly this guy isn’t too bright.

He posted that apology because he looks like a complete sociopathic a-hole for laughing at L.A. County deputies getting shot in the head…and he left this up. 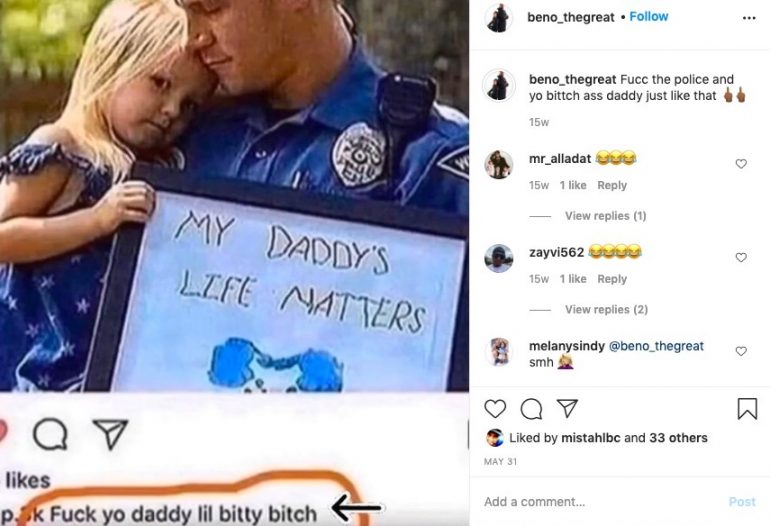 He was smart enough to make his Instagram account private, but not before the screenshots were taken.

There are some extreme Black Lives Matter activists out there that think killing innocent cops is a good thing. Some people think that shooting a cop is fine because they deserve it.

It’s same as Antifa saying it’s ok to “punch a Nazi” and then decide that anyone who disagrees with them is a Nazi.

BLM does the same thing with police officers– they believe that if a person is a member of law enforcement they are complicit in the “systemic racism” and “hunting” of black people. It doesn’t even matter if the police officer is black–he or she is enabling a racist system.

This is precisely what’s wrong with America.

Always remember when this “community organizing” began…BLM was founded in 2013. But it’s not like there were any of those “dog whistles” for violence from President Obama, right?

The godfather of #BLM and his hateful rhetoric are why we are where we are now… pic.twitter.com/LgLK8hZZPM

My bad. I stand corrected.