The Media (D) doesn’t want this to get out because it’s an actual metric that shows the REAL picture.

All we hear day after day is the number of infections and deaths in America and the lambasting of the President for saying that we’re actually doing pretty well. The evidence shows that he’s actually right.

Remember how outraged Democrats and their sycophants in the Media (D) were after Trump was released from Walter Reed and said to not allow a virus to dominate your life?

The media are OUTRAGED that President @realDonaldTrump told Americans not to be afraid of COVID-19 and to not let it "dominate your life."

They want you to be afraid. They want the fear to dominate your life.

At least they are honest. pic.twitter.com/h2Knp9i0EN

The Media (D) keep pushing that the numbers show that the United States isn’t doing well with regard to COVID with the focus on the number of “cases” and the massive number of those categorized as COVID deaths.

Can we all just admit that the numbers are skewed because there are political as well as financial incentives to have people listed as COVID deaths? Can we admit that there are false positives? Can we admit that there are people that have died with COVID who are listed as dying from COVID? It also appears that the virus was here earlier than we originally thought. How many died from COVID but were never tested? Frankly, I don’t think that we’ll ever know the real number of COVID deaths. You can thank China for that.

No rational person believes that China’s reported numbers are accurate. Does anyone believe that China has fewer cases and deaths than Peru, Belgium, and Canada? Those countries are very different in size, population density, and healthcare options.

Instead of looking at the metrics in total as updated on Worldometer, perhaps looking at numbers per capita gives a more accurate picture.

Charts tracking key metrics, including daily cases and deaths per capita, have shed light on where the US sits in the global outbreak.

The data shows that a greater proportion of the populations in smaller European, Asian and South American countries are now being infected and dying on a daily basis when compared to the US.

…when ranking countries per capita – based on total cases per one million people – the US comes in at eighth globally.

Bahrain in the Middle East has the most COVID-19 infections per capita with more than 46,000 case per one million people.

In comparison, the US currently has 25,000 cases per capita.

Here are a handful of charts that show that the United States isn’t the worst place in the world for COVID-19. 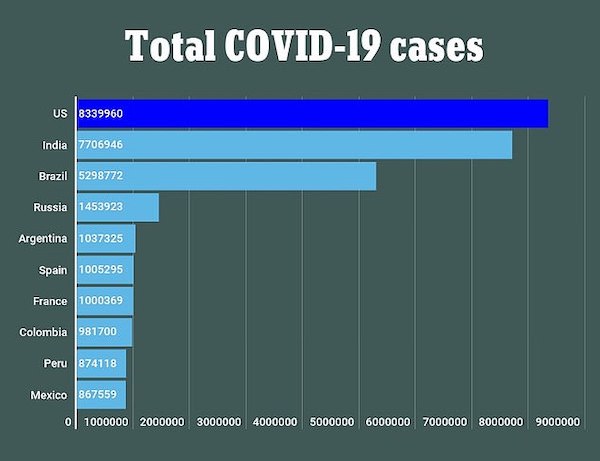 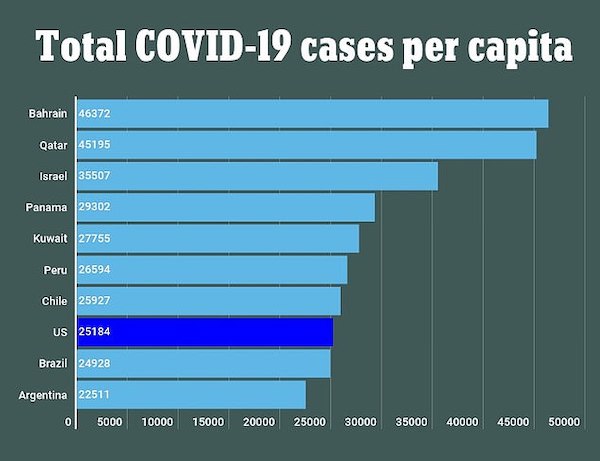 Well, look at that. 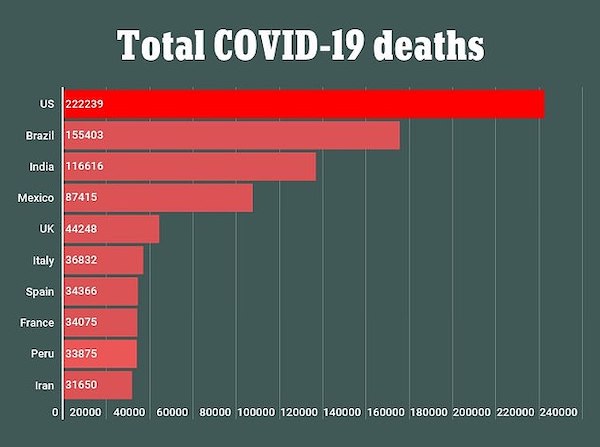 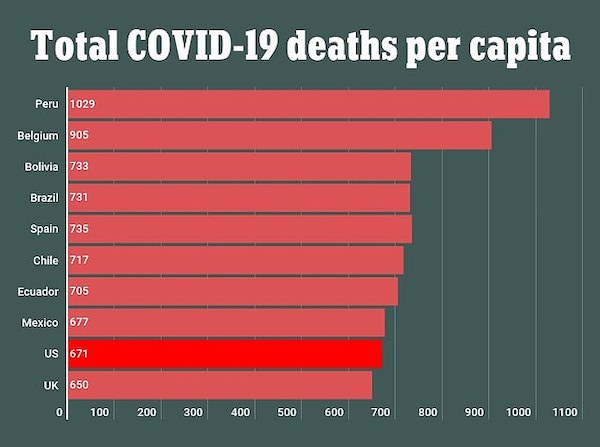 As for the rise in daily cases, well… this certainly puts things in perspective. 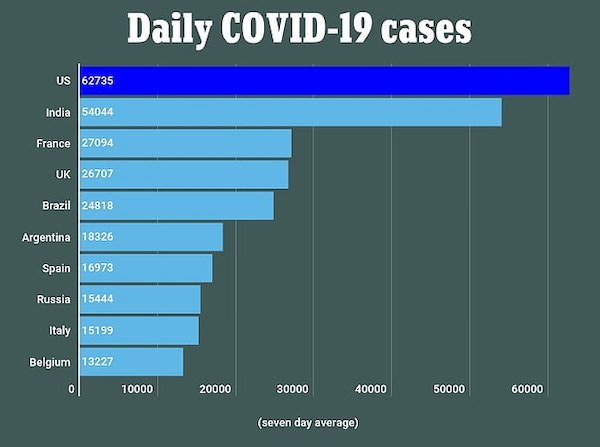 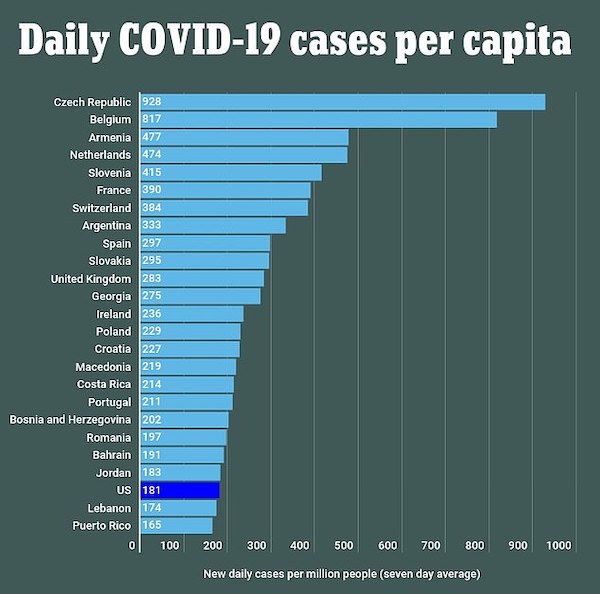 What would Joe do that was different from what Trump has done? He’d implement a national mask mandate, which now weirdly includes all federal buildings and interstate travel.

Does that mean that if you are heading down an interstate highway in your own car you have to wear a facemask?

What a bunch of malarkey!

As for trusting The Science™ on the use of facemasks, well, that’s not exactly settled.

A WHO study on community use of facemasks was published in June 2020 and it was immediately critiqued by medical experts as “deeply flawed.” There were widespread calls for the study to be retracted.

Health 24: Scientists are calling for retraction of Covid-19 paper by Nobel laureate

The critique of the WHO study in the Swiss Policy Research article notes that the evidence on the efficacy of masks is being manipulated because of “political lobbying.”

The authors of the Lancet meta-study acknowledge that the certainty of the evidence regarding facemasks is “low” as all of the studies are observational and none is a randomized controlled trial (RCT). The WHO itself admitted that its updated facemask policy guidelines were based not on new evidence but on “political lobbying”.

This virus shouldn’t have been made political, but it was from the get-go and it was the Democrats that did it by first mocking President Trump for creating a coronavirus task force and then for having so many “white men” on that task force.

Note that Trump’s coronavirus team is all male, all old, and all white.

Let me be clear that all deaths from COVID-19 are tragic, and even one death is too many. But this situation that we’re now in globally ought not to have been so.

Never forget that this virus originated in China, and the Communist Chinese Party lied to the World Health Organization as well as the entire world by saying that there was no human-to-human spread. They “disappeared” whistleblowers. They wouldn’t allow U.S. inspectors to go in early on. We still don’t know precisely how the virus started, although intelligence agencies around the world suspect that it came from the lab in Wuhan. As the CCP attempted to keep it from spreading within their borders, they didn’t do anything to keep it from spreading around the rest of the world. Ultimately, every death is the fault of the CCP’s failure to keep the outbreak of a new virus local and allowed it to become a global pandemic.

No matter how the left tries to spin it, this virus is China’s fault.