The pencil-necked grifters at the Lincoln Project are smarter than you. Just ask them, they’ll tell you. But if they’re so VERY smart, why did they get so badly played by Iran?

It turns out that the folks over at the Lincoln project are just as easily duped as many of the more TDS-infected press are.

Iran is responsible for emails meant to intimidate American voters and sow unrest in multiple states, U.S. officials said Wednesday night in calling out both Tehran and Russia for activities meant to interfere in the upcoming presidential election.

The announcement at a rare news conference just two weeks before the election underscored the concern within the U.S. government about efforts by foreign countries to spread false information meant to suppress voter turnout and undermine American confidence in the vote.

“These actions are desperate attempts by desperate adversaries,” said John Ratcliffe, the government’s top intelligence official, who, along with FBI Director Chris Wray, insisted the U.S. would impose costs on any foreign countries that interfere in the 2020 U.S. election.

The news conference was held as Democratic voters in at least four battleground states, including Florida and Pennsylvania, have received threatening emails, falsely purporting to be from the far-right group Proud Boys, that warned “we will come after you” if the recipients didn’t vote for President Donald Trump.

The voter-intimidation operation apparently used email addresses obtained from state voter registration lists, which include party affiliation and home addresses and can include email addresses and phone numbers. Those addresses were then used in an apparently widespread targeted spamming operation. The senders claimed they would know which candidate the recipient was voting for in the Nov. 3 election, for which early voting is ongoing. —Oregon Live

To anyone aware of Iran’s sophistication in hacking who had been listening to warnings, this tactic should surprise none of us.

They are a nation that chants ‘death to America’ and they are playing on exactly the same fears and suspicions that the Mainstream Press have been actively stoking for years for the purpose of sowing fear, anger, and division.

Of course that warning didn’t keep people from being duped.

Get the story straight CBS. Emails were sent to Democrats supposedly from the Proud Boys threatening them not to vote for Biden. Do Better !! pic.twitter.com/eAd92VdFuH

“Media did exactly what Iran knew they would do. They assumed fake ‘Proud Boys’ e-mails were real, then used them to attack Trump,” a senior intelligence official told The Federalist in light of tonight’s announcement.

They’ve deleted their tweet where they assisted Iran in an operation interfering in our election in hopes of hurting @realDonaldTrump but don’t worry your heads @ProjectLincoln, I saved it for you guys to frame for your gallery of desperate attempts to attack the president. pic.twitter.com/ChuHUVumf2 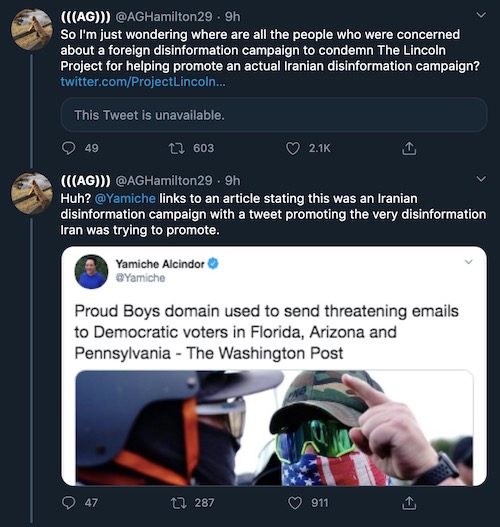 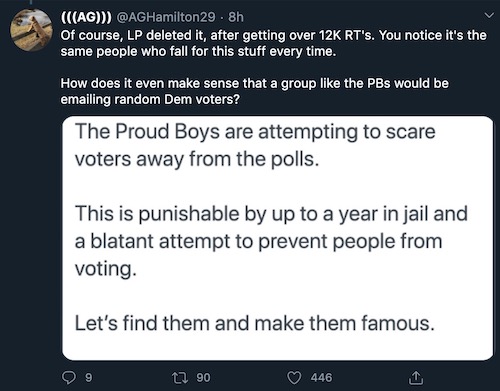 They deleted it just there lmao pic.twitter.com/FJ53QrPZna