It was a great big bombshell story so big that Josh Hawley referenced it as a ‘hypothetical’ question posited to Judge Amy Coney Barrett… but Silicon Valley is doing their best to make sure you won’t see it.

Is it any wonder that folks like Dan Bongino have been convinced that it’s time for lawsuits and the Federal Election Commission to start taking the issue of political interference and in-kind donations seriously?

No less a political activist ‘journalist’ than Brian Stelter came out and ‘said the quiet part out loud’.

It’s the Biden Burisma story. There were new developments in that saga which ClashDaily explained in another of today’s articles — SMOKING GUN: Secret Emails Show That Hunter Biden Introduced Ukrainian Exec Connected To Burisma To Joe 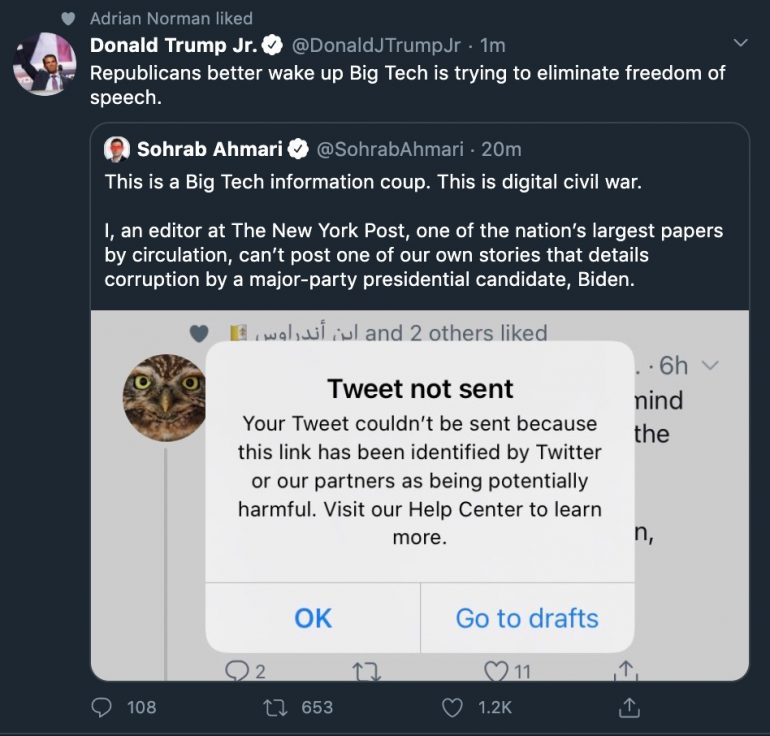 You would think that a potential smoking gun of evidence demonstrating pay-for-play and the deliberate sale of White House access by a relative of the Vice President might be a story worthy of note in days leading up to that same Vice President’s attempt to become POTUS 46.

But no. The same group that gave us 3 1/2 years of Russian Collusion reporting over A Steele Dossier bankrolled by Hillary Clinton and source from a Russian Spy is now ‘too pure’ to run a story that isn’t 100% watertight.

Forget the fact that this story fits neatly within a number of other details we know about Hunter Biden, Burisma, Ukraine, Corruption, and contact with the White House. No, really. They want us to forget all about it.

So much so, that Facebook is limiting the reach of the story that featured that breaking news.

Facebook moved Wednesday to limit the spread of The Post’s reporting on bombshell emails from Hunter Biden’s laptop that show he introduced his father, Joe Biden, to a Ukrainian energy executive — a move that led President Trump’s campaign to accuse the company of “interfering” in the election.

The social network may also have independent fact-checkers examine the exclusive story based on the younger Biden’s emails, according to Facebook spokesman Andy Stone.

“While I will intentionally not link to the New York Post, I want be clear that this story is eligible to be fact checked by Facebook’s third-party fact checking partners. In the meantime, we are reducing its distribution on our platform,” tweeted Andy Stone, a Democrat who is now part of the Facebook Communications team. — NYPost

“I want to know on what grounds you are actively censoring a news report about potentially illegal corruption by the Democrat candidate for president,” Hawley said on Twitter. “If you have evidence this is ‘disinformation’ disclose it immediately.”

Facebook also said The Post’s story would be eligible for review by third-party fact-checkers, a step it generally takes for news articles that raise red flags for misinformation.

Hawley sits on the Senate Homeland Security and Governmental Affairs Committee, which said it is investigating the cache of documents obtained from a laptop believed to be Hunter Biden’s. –NYPost

The mask is off.

Big tech is deploying its power to help Biden get elected, and this statement (from a former Democrat staffer no less) confirms it.

Not only is the platform intervening to protect Biden from a scandal, it is doing so *before* its "fact checkers" say anything. https://t.co/uGOgs3RbqW 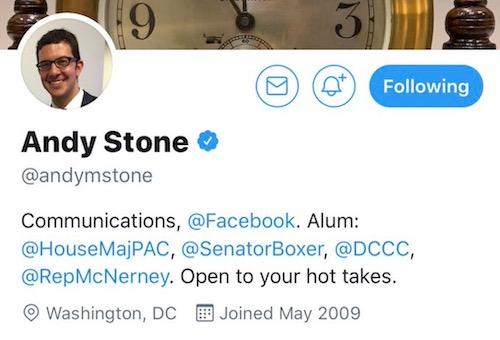 Here’s some of the reaction.

This is part of our standard process to reduce the spread of misinformation. We temporarily reduce distribution pending fact-checker review. https://t.co/vf3CBvLmjj

Facebook is rigging the election for Joe Biden. https://t.co/mXGi2ay8J7 pic.twitter.com/PjtZaVPQ16

Facebook comms, who is former DCCC announces that they are intentionally hiding the NY Post story on its platform without stating any reasoning. pic.twitter.com/ALUqSgOxaf

Holy bleeping bleep. Facebook explicitly admitting it is protecting Biden — and interfering in the presidential election — by censoring media outlets and limiting discussion of today's breaking news about Biden's engagement with Burisma. https://t.co/nF07qqyc5J

HOLY SHIT! This Facebook executive is openly admitting to election interference and anti-competitive behavior in an effort to assist the Democrats.
Facebook is admitting it all. ?????????????????? https://t.co/A7HFOdt4Y0

Could you imagine your phone disconnecting you every time you mentioned something they didnt like?

Could you imagine fact checkers listening in on your calls?

.@Facebook I want to know on what grounds you are actively censoring a news report about potentially illegal corruption by the Democrat candidate for president. If you have evidence this is “disinformation,” disclose it immediately. Expect a formal inquiry from my office

Biden called a lid at 9:41am today

Biden campaign responds to the NY Post story. Critically they only say that such a meeting never took place and do not challenge the veracity of the emails or photos

Leaked emails showing that Biden met with adviser to the Burisma board and FB reduces its distribution.

How is this not election interference from Facebook? https://t.co/fNTyCm4I9t

So was the Steele Dossier but the media reported on Russian Collusion for three and a half years.

Remember when Silicon Valley promised to shove blue policies down the throats of Red states, whether they liked it or not? Do you think this is what they meant?

Situation Update – An astonishing theory: FEMA and the US military will save America at its final hour
January 15th, 2021 DC Clothesline