The MAGA crowd began their march at the Black Lives Matter mural in front of President Trump’s former residence and then took the party to the streets of Manhattan.

The flag is a “Blue Lives Matter” style flag consisting of a black and white version of the American flag with one blue stripe and the words, “Trump” and “Law and Order” written on it.

Trump supporters unfurled what they say is the largest ever flag honoring the president – completely covering the controversial Black Lives Matter mural outside Trump Tower in Manhattan.

Dozens of people gathered outside the Fifth Avenue building 3.30pm on Tuesday before they marched toward Times Square as part of a project named ‘Operation Flag Drop’, which is organized through a Facebook group.

The crowd recited the pledge of allegiance and chants such as ‘whose streets? our streets’ and ‘four more years’ as they marched the 75ft by 50ft flag reading ‘Trump: Law and Order’ through New York City. 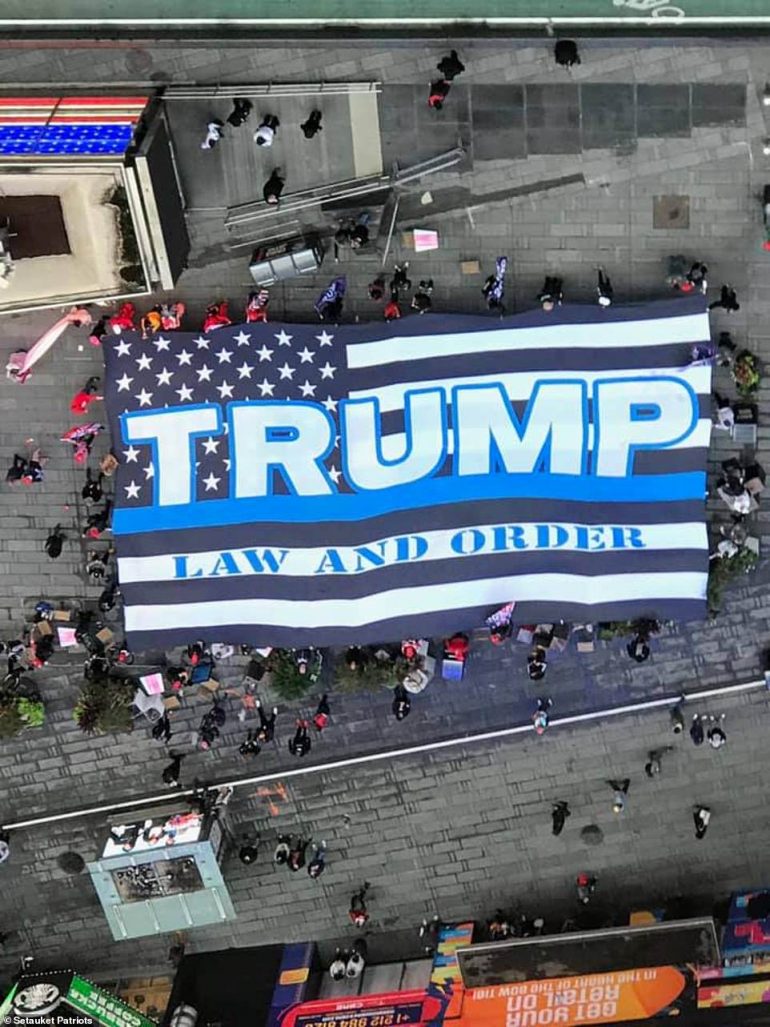 Watch a video of the proud New York Trump supporters.

New York is almost a completely hopeless blue state and yet… Trump supporters managed to pull this off.

Polls have President Trump below Joe Biden, but I don’t know about you, I’m just not convinced that those are very accurate. They weren’t accurate in 2016, and although pollsters say that they’ve fixed their methods, I’m of the opinion that the so-called “silent majority” isn’t admitting their support for Trump with the pollsters.

It seems to me that there is a significant enthusiasm gap with supporters of the two candidates.

Just look at a Biden rally and a Trump rally — it’s like night and day!

Now, I could be wrong. The anti-Trump hysteria that has permeated the Media (D) and their comrades in Big Tech who hold significant sway over the electorate has pushed so much Orange Man Bad propaganda that we could see the majority of Americans “rage-vote” against Trump.

We won’t find out until after the election.

Still, I think that there is very vocal support all over the country for Trump and that’s got to be a good sign for the President, right?

BREAKING: BIDEN NEEDS TO PAY FOR WHAT HE JUST DID TO THE NAVY!!
AFF

A Message To Pete Buttigieg: Hey Buddy Quit Playing House And Get Your Butt To Work!
Washington Exterminator

Even Criminal TSA Employees Now Refusing The “Vaccine” Mandate – 40% Have Not Taken The Shot
October 17th, 2021 Sons of Liberty Media

Aaron Lewis Unleashes on Dems: They’re ‘Responsible for Every F***ing Scar That Exists’ on America
October 15th, 2021 Flag And Cross

Democrats In Congress Seeking Result That Could Be Used Against Biden
October 17th, 2021 Conservative Firing Line