You know all those cries for ‘civility’ we are hearing from the Left? Well, physician heal thyself.

How many times have we seen the dopes on TV rend their clothes and clutch their pearls over some kind of a ‘mean tweet’ where Trump says something rude about a reporter, political rival, or former government employee.

He’s routinely hit with labels like ‘Hitler’ or ‘dictator’ despite working well within the scope of his Constitutionally-mandated Article II authority.

Silicon Valley meanwhile, has been actively tilting the playing field in favor of Biden by ‘fact-checking’ Trump (but not Biden) and dramatically throttling the reach (again!) of Right-of-Center voices like ours just in time for the Election.

We’ve already seen how many of these techies are hard-left activists.

But a former CEO of Twitter calling for capitalists to get shot, and a group of Clinton-aligned Cancel Culture legbreakers — ie, Media Matters — approving of it? That’s bad even by 2020’s low standards.

For full context, two ‘woke’ techies were talking about the difficulty the have in striking a balance of woke politics and top talent in the work environment.

(We might suggest leaving the politics at home, but then again, I’m not a radical activist who believes politics and life are interchangeable terms.)

Here is the conversation as it existed before things escalated.

It began as a pretty reasonable conversation. 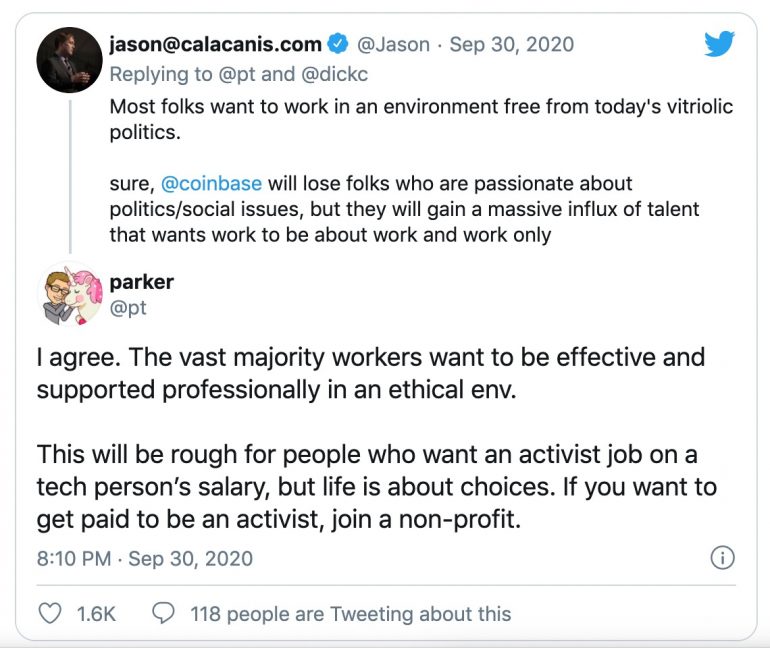 And then someone came along and threw a communist revolutionary’s thinking into the mix. 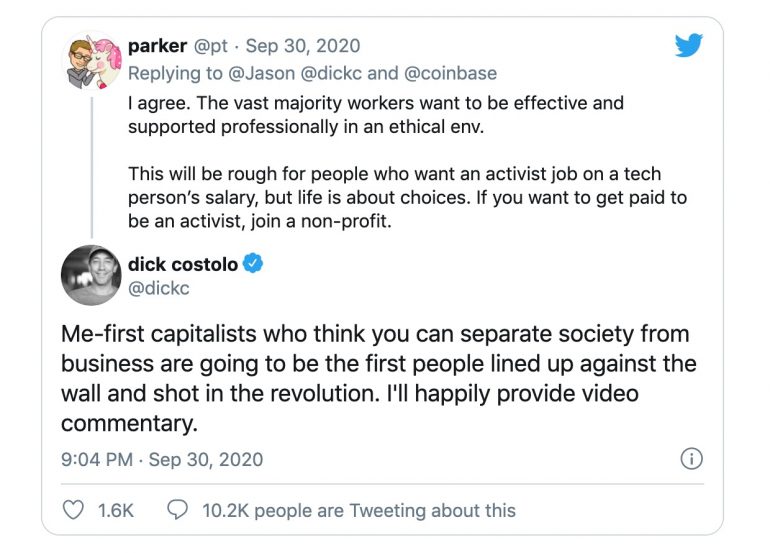 It just so happens that the ‘someone’ was the former CEO of Twitter itself, Dick Costolo.

We can see what Dick’s worldview is here:

Costolo said Coinbase, a platform for people to buy, sell, and store cryptocurrency, was not exemplifying “great leadership” because they announced they will not allow employees to “debate causes or political candidates internally.”

“It’s the equivalent of telling your employees to ‘shut up and dribble,'” Costolo said. “Tech companies used to welcome lively debate about ideas and society. It was part of the social contract inside the company, and it’s what differentiated tech culture from, say, Wells Fargo culture. Now it’s considered a distraction.

“Abandoning the social contract with employees in favor of a purely economic contract in the guise of ‘championship team’ bs makes you a bank with a mission nobody really believes. Good luck getting the best engineers in the world to work at a bank,” he added. –Townhall 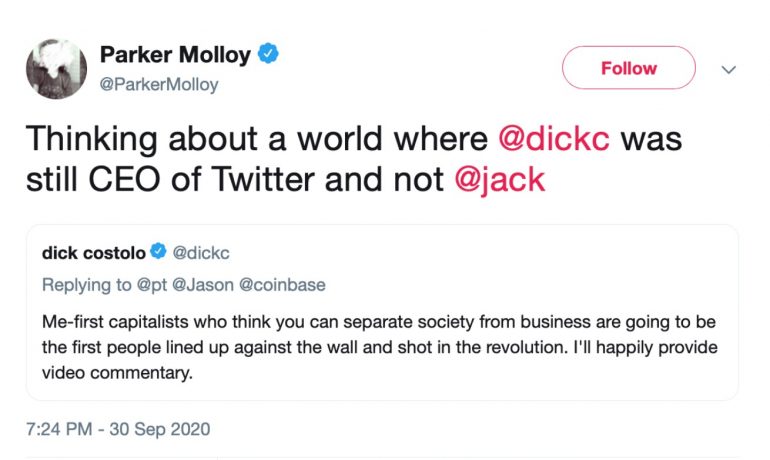 Who is Parker Molloy? Parker is supposedly a member of the blue bubble ‘respectable’ elite. Which means better than the red-hat-wearing knuckle-draggers.
(Taken from bio:)

Parker Molloy is a writer whose work has appeared in places like The Guardian, The New York Times, Rolling Stone, The Daily Beast, VICE, and The Verge. Currently, she writes about the intersection of culture, technology, media, and politics as editor-at-large at Media Matters for America. In 2016, she was named one of Fusion’s “The 30,” a group of “30 women 30 and under who will change the presidential election.” In 2014, she was included on Windy City Times’ annual “30 Under 30” list of influential LGBTQ Chicagoans. Her TV appearances include MSNBC’s “All In with Chris Hayes” and NBC’s “The Today Show.”

Busted, Parker tried to walk it back.

Molloy has attempted a reverse ferret over the retweet, since claiming: “fell asleep after sending a tweet, woke up and saw that some people think I was endorsing violence? No. No, I was not. Hope that clarifies things.” –NationalPulse

No. It does NOT ‘clarify things’. At least, not in the way Parker may think.

The Media Matters role is a big one. Media Matters was set up by Clinton flunkie David Brock as an attack dog against the political right.

They are a big driver of the ‘Cancel Culture’ the left has been wielding against the Right because they don’t want to just sway public opinion, but destroy anyone who stands in the way of their politics.

Don’t take our word for it, David Brock wrote the template for how they would destroy the political right in politics. He even put it in a convenient White Paper. MEDIA MATTERS WAR PLAN 2017

An editor-at-large for a Leftist ‘Media Watchdog’ organization (with charitable status!) whose chief aim is the destruction of the political right just retweeted a call for the murder of Capitalists who opposes the radical left’s niche view of politics. The happily provide video commentary is a helluva window into the empty void where his soul should be and — since Parker Molloy thought it worth tweeting so fondly — into Parker’s as well.

This is NOT a one-off. This is a trend.

Another former CEO Evan Clarke Williams (@ev) shared an article that was endorsed as a ‘great article’ by the current CEO, Jack Dorsey.

That article called for the Left to force-feed their political changes onto red states, whether those red states want it or not. We covered that here: Leftists Want A ‘New Civil War’ – This Post Is Disturbing

This isn’t a quest to persuade the nation to accept that new beliefs do a better job of solving an old problem. This is an attempt to use naked power, money, influence and leveraging the digital public square to force compliance.

The brick-chuckers in black masks are part of the very same movement of win-by-any-means-necessary that these more ‘civilized’ guys in their private yachts are playing. The only difference is the levels of force or sophistication.

Trump is NOT the one creating division. The hard Political Left is.

The very ones whose (@jack)-boots Biden and Kamala have been so dutifully licking.

November is coming. We have a choice to make.

And I doubt even the average LARPing pseudo-revolutionary has the foggiest notion what Hell they are on the verge of opening up if they try to bring a Communist revolution to American shores — or worse yet, succeed in flipping America into a Neo-Soviet State.