It was supposed to be a day of ‘victory’ for Katie Hill’s big announcement. Instead, the woman who introduced ‘throuple’ to the national vernacular was very busy doing damage control.

Like so many Democrat has-beens, she is getting a soft landing by the Democrat’s media accomplices. They are turning Hill’s story into a movie.

Elisabeth Moss has found her next role, and it’s one which is sure to cause a stir.

The “Handmaid’s Tale” star has signed on to play former Congresswoman Katie Hill in a streaming film adaptation of her forthcoming book “She Will Rise: Becoming a Warrior in the Battle for True Equality.”

Blumhouse TV has preemptively optioned the book, which was released in August, and will produce alongside Michael Seitzman and his banner Maniac Productions, and Moss and her production company Love & Squalor Pictures.

In the book, Hill recounts her experience as a young woman with no prior political experience whose charm, and common sense won over the people in her district and thrust her into the halls of power in Washington. While her brash confidence won her powerful allies and infuriated her enemies, it was privately concealing a cycle of domestic abuse she was trapped in at home, infamously culminating in the release of intimate photos and the revelation of her own admitted personal mistakes that would eventually result in her stunning fall from grace. —Variety

Blah, blah, blah and so on. They’re pitching the movie. You get the point.

Under ordinary circumstances, that would be the story.

But in response to this announcement, Hill’s social media lit up in a way that would be quite embarrassing to Hill.

Here’s the thread they posted: 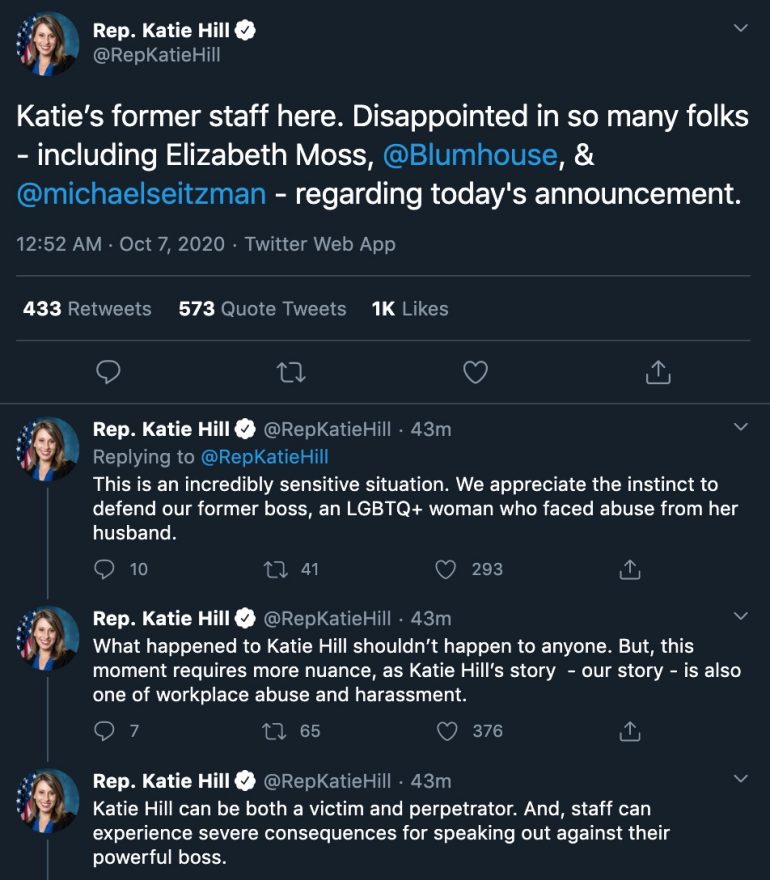 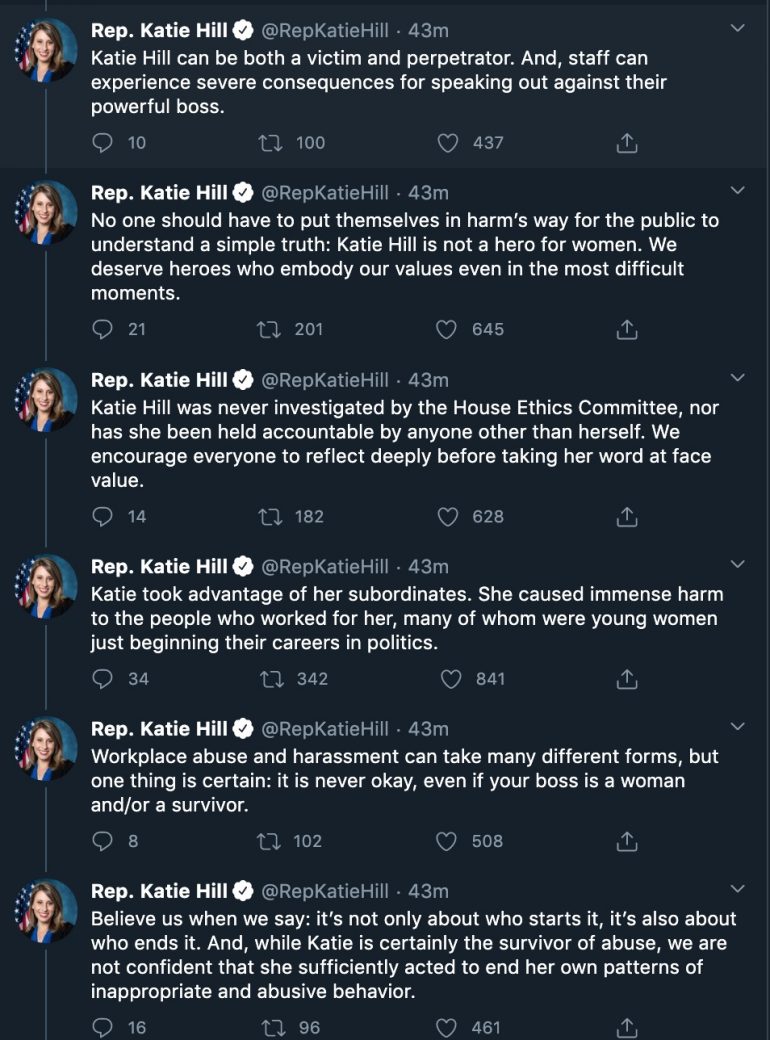 We screenshotted it, since — being critical of the left — it was almost certain to be pulled down eventually.

Katie Hill got wind of the message that had been sent out and claimed to be ‘hacked’.

Looks more like someone who HAD been given access to it didn’t have that access revoked, and used the platform to ‘out’ someone they had a beef with.

Just like so many OTHER Democrats who like to leak to the press… just without involving the complicit press in the process who would have just dropped the story in an unmarked grave.

And someone has used her own account to confirm the sentiments expressed in the tweets.

Love to the best staff there ever was. I miss you all. ❤️

And for those questioning the validity of this, as a volunteer and activist in this district we are still trying to heal and move on. It’s hard to overstate the damage done here. Katie is a victim, but not the only one. pic.twitter.com/CXTVaZismw

Looks like the drama is a long way from over.

You’d think that media that drags out anonymous and unfalsifiable stories about Trump and veterans’ graves in France would take a greater interest in an Honest-to-God MeToo story.

President Trump Speaks About His Future Plans During Lunch At One of His Golf Clubs
January 22nd, 2021 Flag And Cross