If the ongoing insanity in Portland is any indication, this seems to be correct.

A disturbing number of millennials support communism over capitalism. The rise in the popularity of “Democratic socialists” like Bernie Sanders and Alexandria Ocasio-Cortez are also indicators that the left is going quite far left.

That said, it’s important to remember that this statement is by Vladimir Putin who was a former KBG agent and has changed the Russian constitution to allow him to run for office in 2024 and 2030 which would mean he could stay in power until 2036.

In a recent interview, Putin said that although he would work with either administration, he indicated that the Democratic Party’s policies were closer to the “social democratic ideas” that the Communist Party grew out of.

…Putin linked Biden to communist ideology during the interview. While Putin—a former party member, KGB colonel and intelligence operative—made the comparison in positive terms, his comment lines up with GOP talking points about the Biden-Kamala Harris ticket. Trump and his allies have tried to frame their opponents proposing a far-left, extremist platform dictated by the progressive wing of the Democratic Party.

“After all, I was a member of the Soviet Communist Party for nearly 20 years” Putin added. “I was a rank-and-file member, but it can be said that I believed in the party’s ideas. I still like many of these left-wing values. Equality and fraternity. What is bad about them? In fact, they are akin to Christian values.”

“Yes, they are difficult to implement, but they are very attractive, nevertheless. In other words, this can be seen as an ideological basis for developing contacts with the Democratic representative.”

Do you think that Vladimir Putin is a champion for equality and fraternity? The man poisons his enemies. It’s even suspected that he targeted an anti-corruption watchdog blogger with poison this past August which had him in a coma for several weeks. Putin’s favorite nerve agent was found in samples taken from journalist Alexey Navalny, who has since recovered.

It is in Russia’s interests to undermine the trust in American democracy and sow confusion. It’s likely that Putin is playing both sides by declaring his support for Biden.

Democrats will say that this is a “false flag” and Putin really supports President Trump.

Really? Why would he want to work with Trump? President Trump has been undermining Russian interests from the moment he took office.

During the Trump administration, Russia has been slapped down in a rather embarrassing number of ways:

And several more ways you can read about in this Townhall article.

Just a few weeks ago, President Trump’s former National Security Advisor, H.R. McMaster, said that Trump has been quite tough on Russia.

As for Joe? Well, there was that whole “Russian reset” nonsense, Barry talking about “flexibility” with European missile defense to keep Putin in check, and the standing around and staring as Russia took Crimea — but there was also knowingly using Russian disinformation to undermine the Trump campaign and help Hillary create a distraction from her email scandal.

BOMBSHELL REPORT: Trump-Russia Collusion Was A STRATEGY By Hillary To Distract From Email Scandal

Putin also said that Biden was open to sign a new nuclear arms deal with Russia to replace the one that will lapse next year, but the Trump administration wants to include China in any new nuclear deal.

The Russian President also made reference to the Black Lives Matter protests and the re-stoking of racial division in America.

“Back in the 1930s, Communist International leaders wrote that both black and white workers had a common enemy–imperialism and capitalism. They also wrote that these people could become the most effective group in the future revolutionary battle.”

“So, this is something that can be seen, to a degree, as common values, if not a unifying agent for us,” Putin said. “People of my generation remember a time when huge portraits of Angela Davis, a member of the U.S. Communist Party and an ardent fighter for the rights of African Americans, were on view around the Soviet Union.”

So, yes, we take everything that Putin says with a truck full of salt, but there does seem to be one administration that has been a thorn in his side undermining him and Russian interests for years — and it ain’t the one that Biden was a part of. 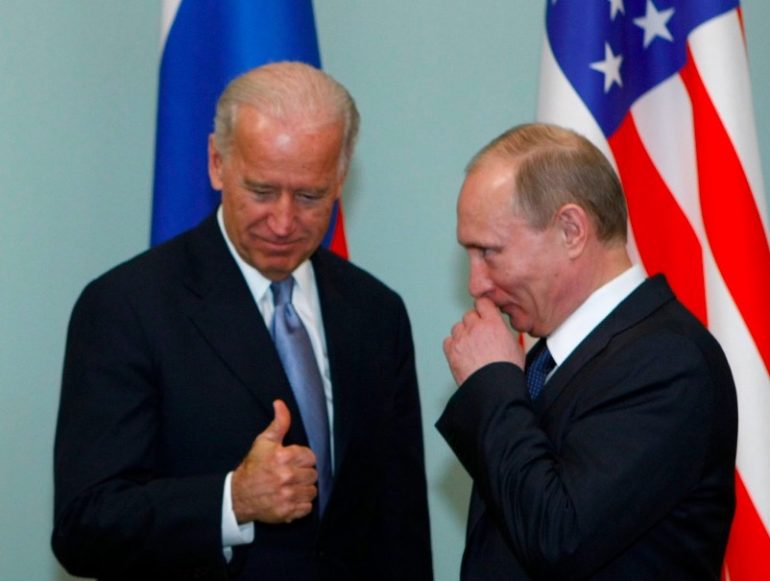 Police Race to Rescue Man Trapped in Burning Truck, Drag Him to Safety Seconds Before It Explodes
June 14th, 2021 Flag And Cross

The Testimony That No American Should Overlook! (Video)
June 14th, 2021 Sons of Liberty Media