It’s put up or shut up time — Pelosi has been playing games on this for months now.

The same woman who came back early from a break to showboat over mail-in ballots (A real ‘winning issue; you backed there, Nancy. Good going.) has not shown the same eagerness in making sure that Americans stuck in limbo during the Coronavirus shutdowns get the help they need.

She’s been far more interested in what pork she can attach to the bill.

And every time the Republicans balk at her Trillion-dollar figures, guess whose fault she says it is? Exactly.

It’s time to put up or shut up. 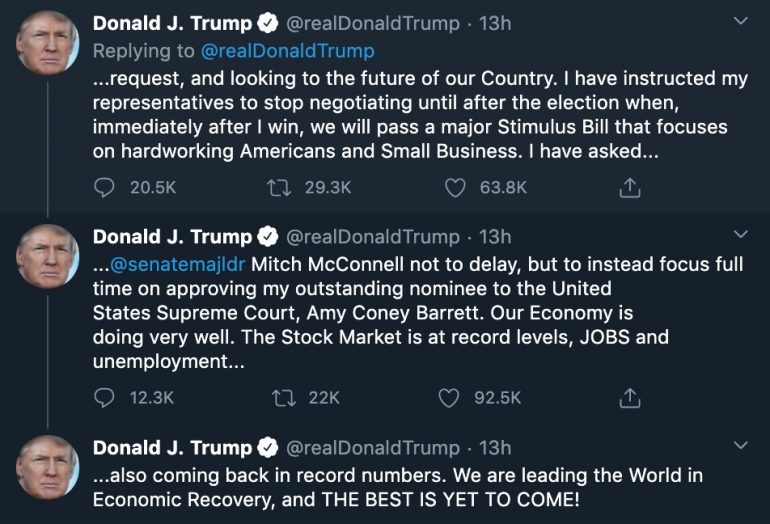 Nancy, of course, is outraged. Because, just like some people have ‘resting b*tch face’, outraged is now her default state.

She started in on him in all the usual ways. But POTUS played the Trump card.

If I am sent a Stand Alone Bill for Stimulus Checks ($1,200), they will go out to our great people IMMEDIATELY. I am ready to sign right now. Are you listening Nancy? @MarkMeadows @senatemajldr @kevinomccarthy @SpeakerPelosi @SenSchumer

If she’s willing to stop filling the bill full of Democrat pork, it will go through.

Who does she love more? The American taxpayer, or her various pork projects?

We saw that last time that Media Matters found their way up to the trough, to the tune of Million$. Not to mention Planned Parenthood.

Those are not the sorts of people who need taxpayer-funded bailouts.

Hey Pelosi, come back with a skinny bill, or admit you’ve just been playing bare-fisted political games all along.

The New Prophets – Tell the World to Take It or Leave It
January 17th, 2021 TCP News

Virginia pay bill will be a nightmare for some small employers
January 17th, 2021 Liberty Unyielding