Senate Democrats are beclowning themselves during the confirmation process of Amy Coney Barrett. Are you surprised?

That’s what this is about — Democrats want to be able to rely on the Supreme Court to ram through and/or uphold their agenda without accountability to the electorate. They want a rubber stamp and they want to know precisely how a judge will rule before they confirm a Supreme Court justice.

Senator Feinstein — and later the other Democrat senators — constantly tried to get Judge Barrett to give her opinion on cases that might go before the Supreme Court. Judge Barrett kept shutting that down by citing what became known as the “Ginsburg Rule” and the words of Justice Elena Kagan at her confirmation, “it would be inappropriate for a nominee to talk about how she will rule on pending cases or on cases beyond that that might come before the court.”

They asked about how Judge Barrett would rule on abortion, gay marriage, the right to bear arms, and Obamacare.

Feinstein just went from complementing ACB's large family to immediately attacking her for her stance on abortion.

You can't make this up. pic.twitter.com/H7t9fNOMX1

3. Senator Chris Coons (D-DE) tried to get Judge Barrett to weigh in on the legality of the Obamacare ruling

""I'm not here on a mission to destroy the Affordable Care Act. I'm just here to apply the law and adhere to the rule of law." pic.twitter.com/K4mgMGNQoZ

This was particularly disgusting because it was clearly a partisan strike to try to smear anyone who holds conservative views as racists. Also, Judge Barrett’s children — including her two adoped children who are black — were in the room at the time.

But then, we shouldn’t be surprised to see something like this from Senator Spartacus. It was just surprising that his “jazz hands” didn’t make an appearance.

What a vile question.

Here’s resident Senate lunatic, Mazie Hirono asking Amy Coney Barrett "Have you ever made unwanted requests for sexual favors… or committed assault of a sexual nature?"

It’s important to note that Senator Mazie Hirono is clearly the current sitting Senator with the lowest I.Q. While her actual I.Q. has not been made public, it’s pretty clear from her statements and actions that this is the case.

She is an unintelligent, unserious, completely partisan hack who is an absolute embarrassment and a walking, talking, damning indictment on the judgment of the voters in the state of Hawaii.

This time Senator Hirono took issue with the phrase “sexual preference” calling it an “offensive and outdated term.”

Except… Democrats, including Joe Biden in July, constantly use the phrase.

She basically gave a looooooong monologue basically saying that Judge Barrett shouldn’t be confirmed because she won’t vote the same way as Justice Ginsburg did.

It’s a stupid, lazy argument from someone who has made it clear that she’s willing to pack the Supreme Court to ensure that Republicans never, ever have a win.

"I would suggest that we not pretend that we don't know how this nominee views a woman's right to choose," California Sen. Kamala Harris said of Amy Coney Barrett during the judge's Supreme Court confirmation hearings on Tuesday. pic.twitter.com/HegFxVWXOp

2/ The technical difficulties some senators had during the ACB hearings were both comical and sad. Really? If we are so rushed for time why waste so much of it repeating yourselves and saying nothing?! @IngrahamAngle thanks for having Robert Dunn and me on tonight! pic.twitter.com/wCz5xbG8mP

You can watch Senator Harris’s full remarks are here if you’re feeling masochistic.

Let’s be clear, Kamala Harris has already prejudged this nominee and has made it clear that she’s a bigot.

Nothing that the Democrats try to pull during the hearing will change the result of the vote — Amy Coney Barrett, a stellar and incredibly impressive candidate for the Supreme Court, will be confirmed. 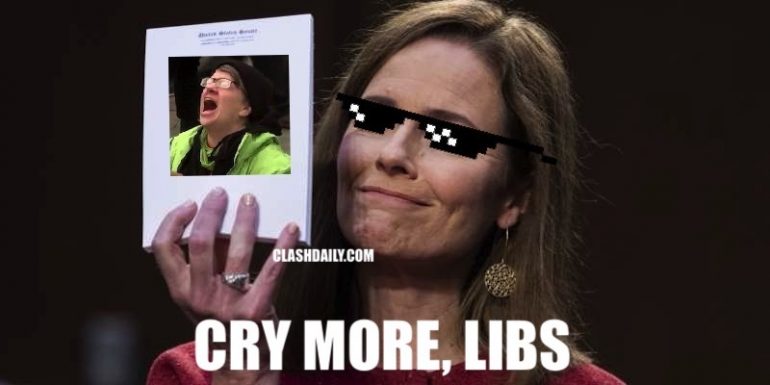