Unlike Antifa’s black block bullies meeting after dark with weapons and their identities concealed, Trump supporters planned a daytime march.

The leftists really don’t believe in free speech. They are authoritarian, by instinct. That’s why they think a Biden government can be pushed in the directions they like, while a Trump government has always been an obstacle to be destroyed.

Antifa didn’t have the strength of numbers to use wolfpack tactics to ambush, separate, and single out targets until after the main event ended, and some stragglers remained behind. 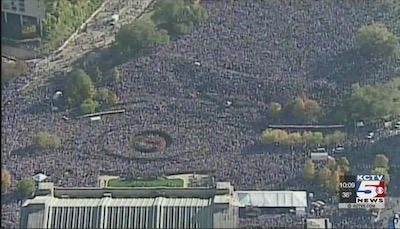 That’s when the ugly stuff like this really began to happen. If you watch the whole thing, you will see some recurring characters hitting from behind and sucker-punching people. One ‘lady’ in an orange hat especially stands out.

Here is a longer video of the incident of the man that got knocked out from behind.

Nice find!
Here it is in slow motion where he gets sucker punched & she steals his phone. pic.twitter.com/BIv5hHm8HS

While context does matter, and the guy seemed to be egging BLM/Antifa on, the Trump supporters were being followed and harassed for some time. One guy hauls off and hits one of the BLM/Antifa guys with a bullhorn and that’s when all hell breaks loose.

The guy with the bullhorn was using it to heckle and harass conservatives as his group chased them down the street. Bullhorns have sometimes been used to direct the mobs to particular actions.

But that’s just the beginning of that video, we don’t really know what else led up to that action.

For example we’ve seen multiple videos of BLM/Antifa running up and hitting people from behind.

The footage of the brutal assault was captured by myself and @FromKalen. We gave the footage to authorities and they arrested the 5 individuals who were responsible for the attack. #MillionMAGAMarch pic.twitter.com/SF8FiboCcg

I hope they got orange beanie too!!! pic.twitter.com/aw6Kys7LDs

Where are the media in all of this?

The President’s supporters have a right to peacefully rally supporting POTUS just like his opponents have that same right. The physical assaults today by violent leftists targeting his supporters is abhorrent. The near total media blackout of the violence is terrible…& telling.

They didn’t see anyone there in pink pussy hats, so it must not be worth giving any substantial coverage.