Democracy dies in darkness, was the slogan. As it happens, our ‘free’ press is gladly providing that darkness.

We now have real numbers on just how well they concealed the Hunter story, and what impact it would have on the election.

“It is an indisputable fact that the media stole the election. The American electorate was intentionally kept in the dark. During the height of the scandal surrounding Hunter Biden’s foreign dealings, the media and the big tech companies did everything in their power to cover it up. Twitter and Facebook limited sharing of the New York Post’s reports, and the liberal media omitted it from their coverage or dismissed it as Russian disinformation.

“Now we know the impact of that cover-up. 4.6% of Biden voters say they would not have voted for him had they been aware of evidence of this scandal. This story would have potentially changed the outcome of this election. The media and Silicon Valley were fully aware of this, so they actively tried to prevent it from reaching the American public. The American people deserved to know the truth; now it’s too late.”

The nationwide survey of 1,000 actual voters (including early voters) was conducted November 2-3. (PDF) Voters were asked about the bombshell reporting from the New York Post: “At the time you cast your vote for President, were you aware that evidence exists in emails, texts, eyewitness testimony and banking transactions that the FBI has been investigating since last year directly linking Joe Biden to a corrupt financial arrangement between a Chinese company with connections to the Chinese communist party and Hunter Biden’s business, which may have personally benefitted Joe Biden financially?”

While 73% of respondents said they had heard about these allegations, 27% had not — including 36% of Biden voters. Those Biden voters were then asked: “If you had been aware of this actual evidence in emails, texts, testimony and banking transactions being investigated by the FBI, would you have…” The voters were then given several options: still voted for Joe Biden (86.9%), voted for a third party candidate (5.6%), not voted for any presidential candidate (4.7%), not voted at all (1.7%) or switched their vote to Donald Trump (1.1%).-NewsBusters

Projecting those numbers into real races, if you knocked out 4.7 of Biden’s vote in any of the contested states, you will find that Arizona, Georgia, Wisconsin, Pennsylvania, and North Carolina move solidly into the red column. Michigan, Nebraska CD2, and Nevada get razor-thin. 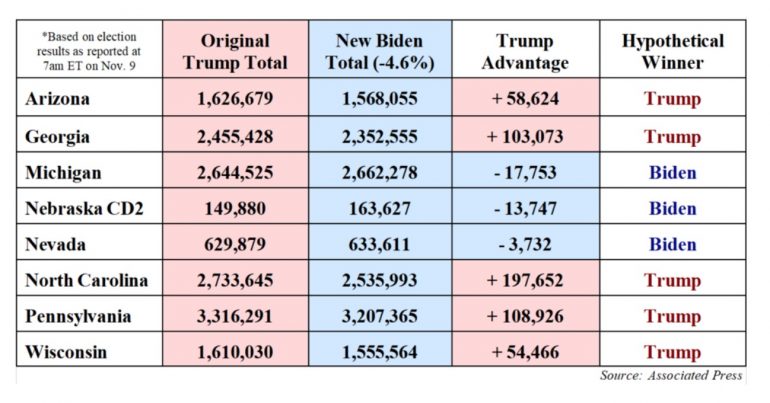 Does anyone believe the coordinated effort to conceal the fact that Joe Biden’s own family likely constitutes a National Security risk was NOT intentional?

The one thing that is most critical to an effective election is an informed electorate. It is critical that we have a complete view of the relative strengthts and weaknesses of the relevant candidates so we can choose who is best qualified to be entrusted with leadership moving forward.

The media’s sad legacy of eight years of cloying sycophants under Obama, followed by four years of perpetual outrage under ‘OrangeManBad’ did not leave us with anything close to having an informed public.

If you want to put this in perspective, two of our papers shared a Pulitzer Prize for a now-discredited series of stories alleging that Trump was somehow in Putin’s pocket and that Russia tampered with the election outcome of 2016.

National Reporting
Staffs of The New York Times and The Washington Post
For deeply sourced, relentlessly reported coverage in the public interest that dramatically furthered the nation’s understanding of Russian interference in the 2016 presidential election and its connections to the Trump campaign, the President-elect’s transition team and his eventual administration. (The New York Times entry, submitted in this category, was moved into contention by the Board and then jointly awarded the Prize.) —Pulitzer

They failed to return those awards, and most Americans have probably never heard the later news that the Russia hoax allegations were designed explicitly as a deflection from attention into Hillary’s email inquiries.

Media wasn’t just silent about allegations of Biden being on the take from the Chinese Communist Party… they ran interference into anyone who dared mention it.

Unlike the Russia hoax, there were confirmed emails, where real-live third parties mentioned in an email chain independently corroborated facts supporting some of the more serious allegations.

IS Biden a national security risk?

That would have been a damned good question for a ‘free press’ to ask BEFORE election day, don’t you think?

Does ANYONE still believe they are anything other than the corrupt activists and the defacto AV department for the Democrats?

EXPERT: Hunter Biden’s Laptop From Hell Was A ‘National Security Nightmare’ Filled With ‘Classic Blackmail Material’
Audio: Hunter’s Representation Of The ‘F**king Spy Chief Of China’ … Is That News?

HUNTER: Fighting Over Money, Biden Threatens Chinese Partner… And What’s This About Judges?