After what has been — for some — almost a lifetime of waiting, the bill is finally coming due for a service group’s failure to police its own leadership.

Let this process stand as a warning to other groups in whose care we have committed vulnerable populations, be they children, the elderly, people with disabilities, or any other potentially easily-exploited victims of relationships with a power imbalance. (Yes, this includes religious organizations, public schools, and sports teams.)

Failure to police your own leadership, and take allegations of abuse seriously can hurt more than just your reputation — it can sink the whole enterprise.

Boy Scouts of America is on the ropes and facing bankruptcy partly because they came to this realization too late.

Christopher Hurley, the managing partner with a law firm representing 4,000 survivors of childhood sexual abuse who say they were victimized while participating in the Boy Scouts, said in a statement to The Christian Post that there are over 88,500 victims that have come forward as of Monday, the deadline the bankruptcy court set for such claims.

“We knew the problem was severe and we knew it had been neglected by the Boy Scout organization for too long. But with 88,500 victims, the breadth and depth of the problem now feels overwhelming,” he said. “I have represented tragically injured people for 36 years but the number of broken, lonely men I have come to know over the last six months has had a profound impact on me personally.”

Just how bad is it? Just look at the age gap in the complainants:

The BSA has filed for bankruptcy but hopes to reemerge anew one day.

According to its bankruptcy filing, the organization founded in 1910 reportedly has over $1 billion in assets, much of it in real estate.

“The response we have seen from survivors has been gut-wrenching,” the BSA said in the statement, noting that it was “devastated by the number of lives impacted by past abuse in Scouting.”

“We are deeply sorry.” –ChristianPost

Those are some staggering facts, in terms of pure numbers.

Here’s another way to process it. Since the 1980s, a typical jamboree has an attendance ranging from 29,000 to 43,000 campers. This number of alleged victims is between two and three times the entire attendance of a jamboree.

Give that number a moment to process.

There are only 12 stadiums in the entire country with enough seating to hold that entire number. If this chart is accurate, none of the NFL stadiums would have enough seats to take them all. 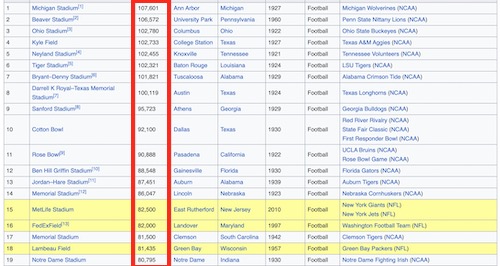 Numbers are sterile things that give a vague sense of quantity, but say nothing about the actions themselves.

But some of the details shed light on the nature of these allegations.

Andrew Van Arsdale, one of the lead attorneys in the case, told CNN that he’s spoken to thousands of alleged survivors of the past 19 months.

‘Based on what we are hearing from survivors, sexual abuse was a rite of passage in troops across the country, similar to other tasks where children had to … perform certain duties to earn their coveted merit badges,’ he said. —DailyMail

America has a court system for a reason, there are plenty of opportunities in the world and slip-and-fall lawyers willing to help them, and we have a presumption of innocence for a reason.

That being said, this is a tsunami of allegations, and if even only a percentage of them are valid, it is a horrific example of the violation of trust.

The left likes to throw around the word ‘systemic’. Having sexual favors as a requirement for advancement in your badges ‘across the country’ — if proven — is an example of what systemic REALLY means.

Real leadership is doing the right thing even when it’s the hard thing. Sometimes, that means bringing the police in to investigate one of your own.

Let this stand as a hard lesson to any other organization in a comparable position of trust.