Remember folks, these are the sorts of people Kamala was helping to bail out of jail. The folks that Fredo Cuomo and Don LeMON assured us were the ‘good guys’, fighting against tyranny.

Let’s set the tone for this thread by showing just how VERY wrong anyone who claimed these guys were fighting on the side of virtue really are.

Law enforcement are asking antifa rioters to disperse from the street in downtown Portland so that they can respond to someone’s medical emergency in one of the buildings. #PortlandRiots #antifa pic.twitter.com/Ykd7w9XciK

How’s that ‘fighting fascism’ narrative playing out for you now?

(H/t to Andy Ngo for this coverage.)

Antifa had a message for Portland on election day.

It was printed in advance and ready to go: 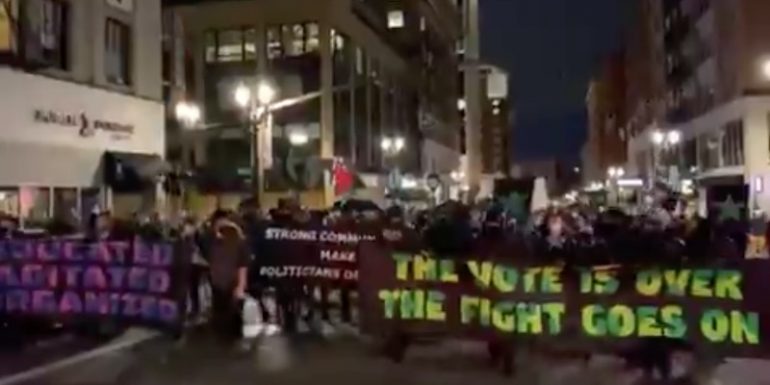 A symbolic end to Election Day in Portland.

While chanting, “Black lives matter,” antifa burn a US flag in front of the federal courthouse. In their speeches, they said they will continue fighting regardless of who wins because the real enemy is the US. pic.twitter.com/SQpe8j1LPz

The next time someone says it’s wrong to call the press the ‘enemy of the people’ show them this:

The Press are actively part of the problem there.

Best thing to do is to download videos from antifa "press" so that when they end up deleting them (because they don't like me RTing), there is still a copy of the record. They want to control who can record & who can share videos from their violent protests. Don't let them. pic.twitter.com/lqdsVgCWlJ 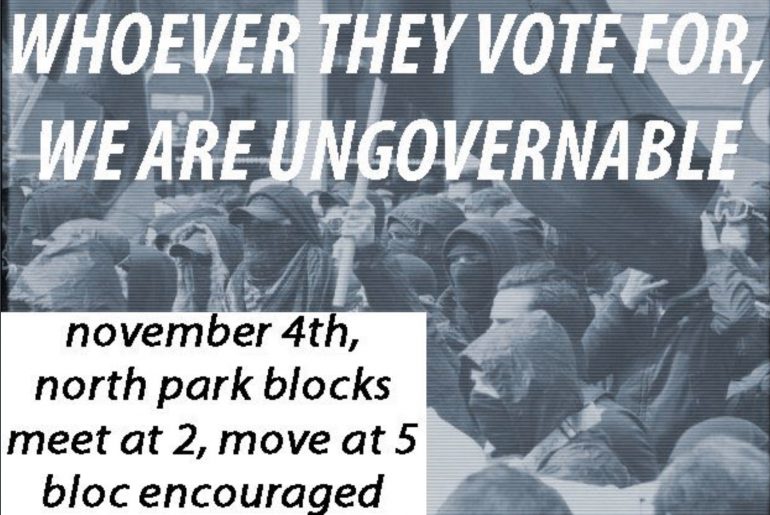 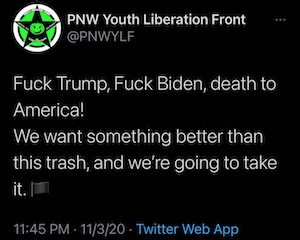 These clods are Vanilla ISIS.

While AOC frets about ‘Proudboys’ this is happening in American Cities…

Tonight, around 300 BLM-antifa shut down residential areas of SE Portland. They had a motor blockade & people on bikes who blocked nearby streets. Their armed security team included those w/semi-auto rifles, shotguns, bats & more. They harassed businesses & people at their homes. pic.twitter.com/wyeE3zd0Hd

“Regardless of who is determined to be the presidential elect, leftist militants who have since May continually wreaked havoc on Portland have outlined their objective: the real enemy is the United States.” https://t.co/K0jMkFpTYO

Portland having its own night of broken windows.

The Governor has FINALLY called for backup.

The National Guard was activated for the first time to respond to rioting in Portland. #antifa https://t.co/HYacvA0oFi

Not that it will come as much comfort to the people whose businesses they smashed up.

If we had an honest press that wasn’t afraid to hurt a Democrat’s election chances, the Antifa issue would have been part of a REAL national conversation as far back as their violent ‘protests’ ramped up in 2017.