What happened to all of Joe’s tough talk about pushups and taking Trump behind the gym to give him a beating? Playing with his dog ends in a hospital visit.

No wonder so many of Joe’s ‘campaign’ days ended up being called with a lid almost before the press could finish that first cup of coffee.

Maybe he really IS as frail as he seems. 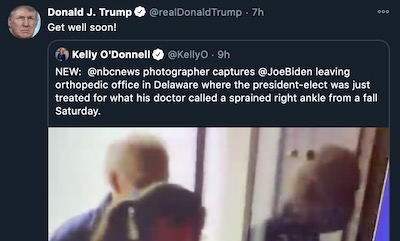 …in response to the video showing Biden coming out from a doctor’s visit.

NEW: @nbcnews photographer captures @JoeBiden leaving orthopedic office in Delaware where the president-elect was just treated for what his doctor called a sprained right ankle from a fall Saturday. pic.twitter.com/mTYee0BMur

Initial reports were that he was playing tug-of-war with his dog by the pool and hurt his foot.

Later, Biden says that after he got out of the shower, he was “joking” running after Major to pull on his tail and tripped on a rug.

There are conflicting reports on whether the injury is a sprain or a broken bone. The reports of a break say he will be wearing a special boot for a while.

On the upside, it’s still better than making his (female) security detail watch him swim in the nude.

Do we wish him well health-wise?

But that doesn’t change our mind on the issues about him being unfit and unready for the White House for a whole score of reasons, his health — while a concern — is not even the foremost among them.

Leftist YouTube And Twitch Streamers Are Radicalizing Your Kids — Here’s The 411
May 18th, 2021 Clash Daily

Gov. Abbott And CPD-Amount Of Illegal Fentanyl Entering US Through Mexico Skyrocketing
May 18th, 2021 The Lid

So many people are suffering adverse events from covid vaccines that an entire Reddit subgroup was created to discuss the details
May 18th, 2021 DC Dirty Laundry