Business owners in New York have had it with the lockdowns and the arbitrary rules that governments have put in place.
Big Tech is clamping down on conservative media big time. Don’t let Big Tech pre-chew your news — subscribe to our ClashDaily Newsletter right here:

A group of business owners in Buffalo, NY, gathered indoors on Friday to “protest” the restrictions that are being put in place in Western New York state due to the spike in COVID in the region.

Shortly after their gathering began, a Health Inspector and several Sheriff’s deputies arrived to break up the gathering.

A gathering of about 50 business owners and their supporters inside an Orchard Park gym shut down by Covid-19 restrictions turned into a confrontation with Erie County authorities Friday night.

The owner of the gym, Athletes Unleashed on California Road, described the gathering as a protest of the state’s “orange zone” regulations that have closed gyms, salons and other businesses deemed nonessential.

No one was cited and no arrests were made, according to two people who attended, but video of the incident shows an Erie County health inspector accompanied by three sheriff’s deputies arriving about 20 minutes after the gathering began.

The business owners were angry and frustrated with the lockdowns and the consequences that don’t seem to be considered by the Powers That Be. One man appealed for compassion saying that he’s known people that have died because they lost their livelihoods.

The interaction was recorded and posted on social media. By Saturday morning, the video had gone viral.

Robby Dinero, the owner of the gym said, “It absolutely was a protest – inside my building.”

“I called this meeting together so we could protest the closing of small businesses, the handpicking of winners and losers,” Dinero said.

As a protest, Dinero said, the gathering was protected by law.

Dinero pointed out that authorities didn’t try to stop Black Lives Matter protests over the summer or celebrations of Joe Biden’s victory after the election. “It was no problem for people to come out then,” he said.

Dinero said that the Buffalo business owners were willing to work within restrictions because they want their businesses open, but the rules as to what is open and what is closed seem to be rather arbitrary and that is what they are protesting.

Tim Walton, a bartender and event promoter was at the gym on Friday night and noted that malls were allowed to be open for Black Fridays Sales, but other businesses cannot. “It’s the busiest shopping day of the year but a hair salon with two people in it can’t be open?” Walton said. “There’s just so much that doesn’t make sense.”

Dinero and Walton said they are in the process of organizing “some very dynamic protests” in the near future, Dinero said. The gym owner said the protests won’t be violent. “This isn’t a Second Amendment thing. This is not anti-vaxxers. There will be no guns, no fistfights. We’re civil, peaceful protesters but it’ll be led by a Marine.” Dinero served three tours in Afghanistan and Iraq, he said.

He also vowed to celebrate Thanksgiving the way he wants to.

“I’m going to have a huge family gathering and we’re not going to wear masks,” he said.

Erie County Executive Mark Poloncarz tweeted that he heard about a noisy protest being planned near his home on Sunday, but he said that it wouldn’t “weaken our resolve to protect the public from the Coronavirus.” He said that he was offended by the language used in the promotion of the protest.

I am aware of a loud protest planned for tomorrow (11/22) at 9:30 am to target my house and my immediate neighborhood. I am posting this now so my neighbors are aware.

Please read my statement on this and their despicable reference to "internment camps" and "dress up as slaves." pic.twitter.com/0itDFwrDYo

Here is the text promoting the protest:

And here is Poloncarz’s response: 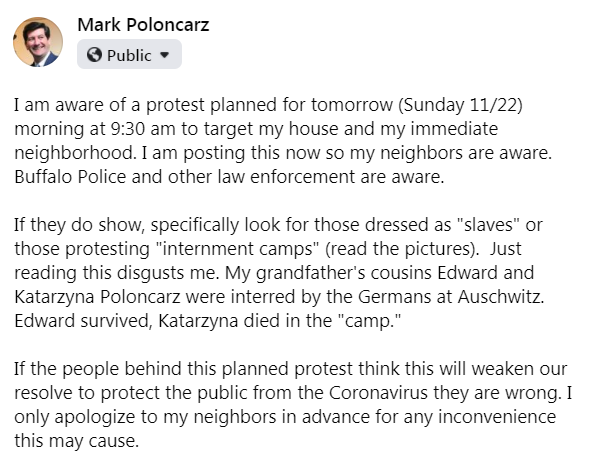 Sure, it’s strong language to invoke — slavery and internment camps — but passions are running pretty high these days. The ongoing, seemingly never-ending lockdowns imposed by the government for “public health” didn’t work last time, why will it suddenly work now? And it’s not just that — the lockdowns are causing people to not just lose their livelihoods, but their will to live.

Here’s a headline from Canada on Thursday:

There are costs to everything, including lockdowns. The questions that the business owners are asking are “Is the cost really worth it? Are lockdowns effective? Or is this just the government picking winners and losers?”

Big Business has done really well during lockdowns and the Mom & Pop shops are closing down — often forever.

These are real questions and we haven’t been able to have that discussion because the politicians and the “experts” that they rely on have taken over the entire discussion even though they’ve been wrong.

Other “experts” have been criticized and silenced.

It’s been 251 days since “15 Days To Stop The Spread” and it’s a reasonable question to ask how effective lockdowns are if the spread is still happening. Don’t you agree?