Do you remember the mini-scandal when AOC tried to cancel a food giant because he dared to meet with the President of the United States and say something nice about him?

Like any good little totalitarian, she wanted his head on a pike.

Violence isn’t yet a socially acceptable option (but the rioters are working on it), so the left tried the next best thing — the politics of personal destruction.

Someone disagrees with you politically? The only reasonable response is to punish them by attacking their ability to earn a living.

Stupid idea? Sure, but it makes sense to a totalitarian. 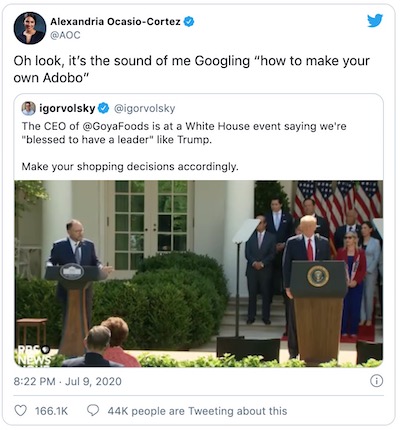 Unfortunately for AOC, she and her cancel-culture allies don’t quite have the power and influence that the media has convinced her that they have. Ultimately her plan didn’t work out quite as well as she had hoped.

Julian Castro, likewise, echoed her demands for a boycott. 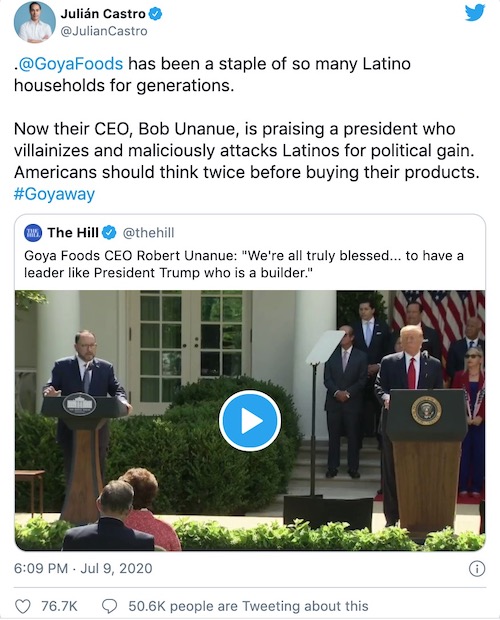 And there was a brief window of time in which the regressive left showed their virtue by posting photos of canned food they had already purchased in garbage cans.

If they were anywhere near the good people they claim to be, those same cans of food would have been very much welcomed in a neighborhood food pantry, but that doesn’t feed their self-righteous indignation quite like virtue signaling on social media does.

Surely that boycott aimed at minorities was a devastating blow to Goya Foods, right?

Unanue said that he believed Ocasio-Cortez was young and naïve, but that she might eventually come around.

“We still have a chance with AOC,” he said, adding, “I love her, you know, I don’t like — she didn’t — she was actually our employee of the month, I don’t know if you know about this.”

Berry said that he wasn’t aware, and Unanue explained that her calls to boycott had actually drawn more attention to the brand, creating a sharp spike in sales.

“When she boycotted us, our sales actually increased 1000%, so we gave her an honorary — we never were able to hand it to her — she got employee of the month for bringing attention to Goya and our adobo,” he said. —DailyCaller