Social Justice is neither about society nor justice. It’s activism that can have deadly consequences.

On December 5, the New York Times published an article titled, “The Elderly vs. Essential Workers: Who Should Get the Coronavirus Vaccine First?” With the ocean of daily news, it didn’t make much of a blip, but it’s getting some much-needed scrutiny now that Noah Rothman, associate editor of Commentary magazine and author of “Unjust: Social Justice and the Unmaking of America” is making some noise about the content.

The TL;DR version is basically this: “Medical experts say it’s ok to let old people die because most of them ware white.”

It’s the Zeke Emanuel mode, really. Emanuel, brother to former Obama advisor and mayor of Chicago, Rahm, wrote in The Atlantic in 2014 that he thought living past the age of 75 is basically worthless.

Zeke Emanuel has been named as one of the members of Joe Biden’s Coronavirus Task Force.

The NYTimes article begins with the heated question about who should be at the front of the line for the COVID-19 vaccine.

With the coronavirus pandemic surging and initial vaccine supplies limited, the United States faces a hard choice: Should the country’s immunization program focus in the early months on the elderly and people with serious medical conditions, who are dying of the virus at the highest rates, or on essential workers, an expansive category encompassing Americans who have borne the greatest risk of infection?

Health care workers and the frailest of the elderly — residents of long-term-care facilities — will almost certainly get the first shots, under guidelines the Centers for Disease Control and Prevention issued on Thursday. But with vaccination expected to start this month, the debate among federal and state health officials about who goes next, and lobbying from outside groups to be included, is growing more urgent.

It’s a tough decision for the CDC. With the COVID tracker on CNN giddily reporting the rise in cases and deaths, and that echoed in every mainstream media outlet, there’s a lot of pressure to stop the spread of the virus and save lives. But, when it comes to COVID, those are two different things.

The article notes that the definition of “essential worker” is rather vague and comprises nearly 70% of the American workforce.

The CDC convened a panel of “independent medical experts” to decide who should be getting the vaccine after the nursing home residents and healthcare workers. CDC Director, Dr. Robert Redfield told the advisory panel, “future recommendations that, based on vaccine availability, demonstrate that we as a nation also prioritize the elderly.” This is consistent with the recommendations of the World Health Organization, the National Academies of Sciences, Engineering, and Medicine, and many countries that insist that the priority should be on saving lives rather than reducing the spread of the virus. This would mean the focus should be on the elderly and the sick who are at the highest risk rather than the nebulous and large group of “essential workers.”

But the panel is not just relying on The Science™, they are also weighing social justice concerns in the vaccine rollout. The result? The NYTimes reports, “In a meeting last month, all voting members of the committee indicated support for putting essential workers ahead of people 65 and older and those with high-risk health conditions.” (Emphasis added.)

Here’s what a few of the committee members had to say:

“To me, the issue of ethics is very significant, very important for this country and clearly favors the essential worker group because of the high proportion of minority, low-income and low-education workers among essential workers.” (Emphasis added.)

Dr. Lipsitch argued that teachers, who are currently not classified as “essential workers” shouldn’t be given the vaccine early.

“Teachers have middle-class salaries, are very often white, and they have college degrees. Of course they should be treated better, but they are not among the most mistreated of workers.” (Emphasis added)

“When you talk about disproportionate impact and you’re concerned about people getting back into the labor force, many are mothers, and they will have a harder time if their children don’t have a reliable place to go, and if you think generally about people who have jobs where they can’t telework, they are disproportionately Black and brown. They’ll have more of a challenge when child care is an issue.” (Emphasis added)

Harald Schmidt, Expert in ethics and health policy at the University of Pennsylvania

“Older populations are whiter. Society is structured in a way that enables them to live longer. Instead of giving additional health benefits to those who already had more of them, we can start to level the playing field a bit.” (Emphasis added)

The article itself is raising the pros and cons of who should be part of the early rollout, but it’s absolutely shocking that the “medical experts” — including an ethicist — are not actually relying on The Science™ but are using the “woke” social justice metrics to “level the playing field” which will likely result in more elderly people dying. Maybe they all read Governor Andrew Cuomo’s book on leadership during a pandemic because they’re taking the same tactic with the vaccine as he did with nursing homes — shoving the most vulnerable aside.

Just as bad as the ethicist going woke is Rev. William J. Barber II, a co-chairman of the Poor People’s Campaign, who said, “It’s damnable that we are even being placed in this position that we have to make these choices, but if we have to make the choice, we cannot once again leave poor and low-wealth essential workers to be last.”

So just let the elderly, who are at the highest risk of serious complications and death behind the behemoth of “essential” workers who would have to get a test to even know that they were sick?

I’m sure that’s just what Jesus would do, right?

I get what Barber is saying here about the poor, and that’s truly a problem, but I have a solution that doesn’t put the poor at the end of the line.

How about this — we make all of the government employees who haven’t missed a paycheck or even a meal during the pandemic last? Especially those Democrats lecturing about masks and social distancing. They haven’t missed their fancy ice cream, trips to swanky restaurants in the Napa Valley, or trips to Cabo.

Screenshots of the article are being spread all over Twitter.

This is *exactly* how race essentialist progressives think. https://t.co/Og0TwkIv9e

Amy Curtis, who I apparently follow on Twitter, made a very interesting observation. She noted that conservative writer Bethany Shondark was called a “Grandma Killer” for pushing back against lockdowns and advocating for sheltering the vulnerable and letting the rest of us live our lives. Just last night she was bashed by NeverTrumper Charlie Sykes again. Quite the timing.

Remember how @bethanyshondark got shit for being a “grandma killer”? Well this “ethics expert” just said kill grandma cause she’s white and privileged.

Does this mean @NYGovCuomo was just “leveling the playing field”?

She also notes that some jurisdictions allow exemptions for minorities for flu vaccinations because of the perception that minorities have been used as guinea pigs for medical research in the past, for example, the infamous Tuskegee Syphilis Study.

These are the same people who say minorities are exempt from mandatory flu vaccines because of “historical injustices.” https://t.co/mylgC49sbe

But don’t think that it’s just conservatives that are upset.

James Lindsay, part of the trio that submitted fake “woke” papers to peer-reviewed journals… and saw them published, is overtly critical of Critical Race Theory and “wokeness” in general.

He found this particularly abhorrent. 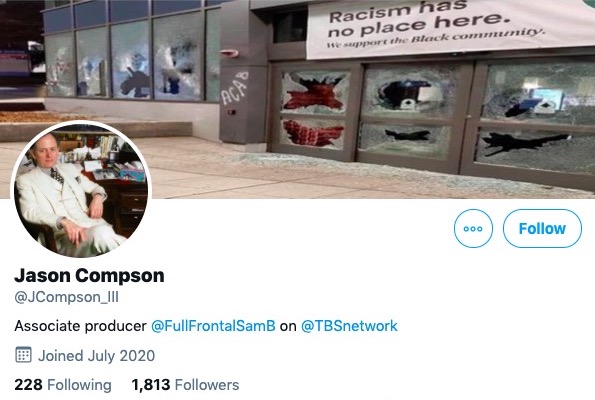 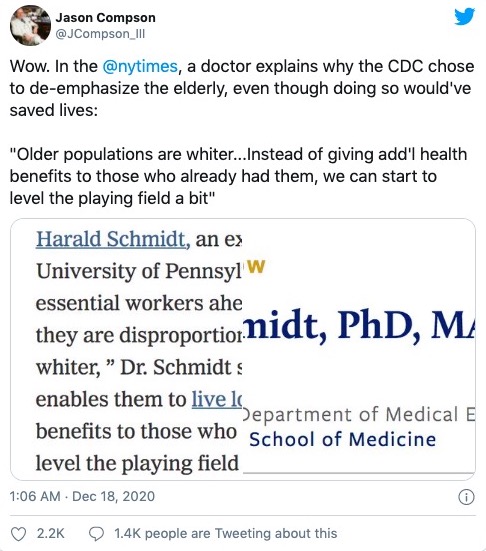 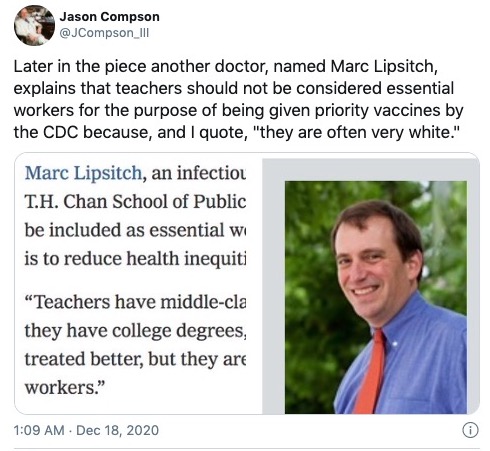 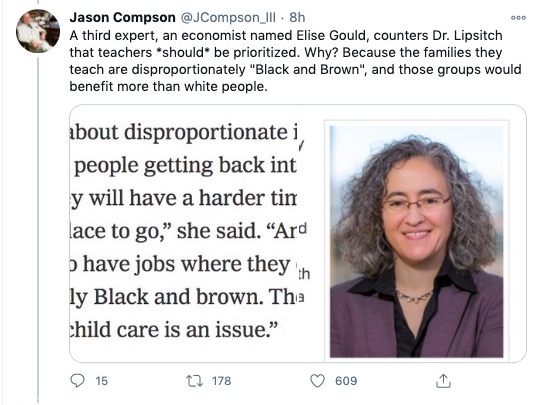 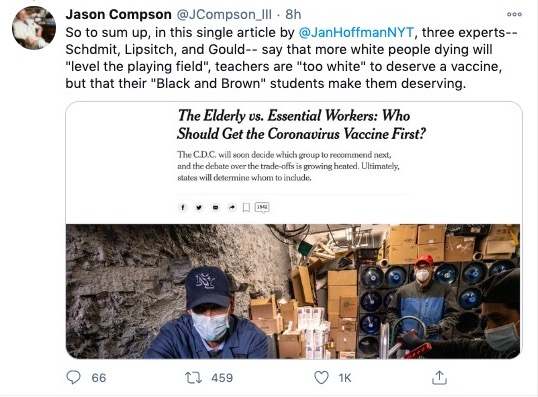 It’s nice to know that there are still some rational people on the left that recognize racism when they see it.