The trail he blazed was the stuff of legend, deeds of courage that serve as rocket fuel for the masculine imaginations of generations of young boys that follow.

When the eleven Nazi planes you shot down as a WWII ace are almost an afterthought in your biography, you know you’ve lived a full life.

There was a day, in living memory, where exceeding the sound barrier was a merely hypothetical possibility.

It was test pilots like these that paved the way for the space program, and — by consequence — so many of the modern conveniences that have followed.

There were no how-to manuals. No insurance adjusters with actuary tables tut-tutting the program saying ‘it’s too risky’.

Everyone knew and understood the risk. And they dared anyway.

That’s what made them heroes to so many that came after them.

It was a different age, when such courage was more highly prized than, say, having a top-charting album, or youtube channel, or a fadeaway jump shot.

We have fewer such heroes than we once did.

And now, we sadly say goodby to another one. 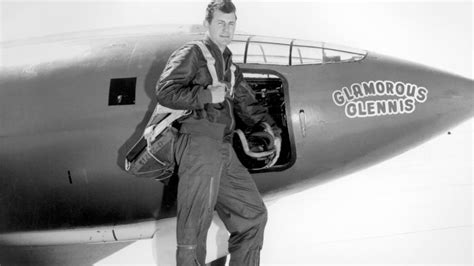 Retired Air Force Brig. Gen. Charles “Chuck” Yeager, the World War II fighter pilot ace and quintessential test pilot who showed he had the “right stuff” when in 1947 he became the first person to fly faster than sound, has died. He was 97.

Yeager died Monday, his wife, Victoria Yeager, said on his Twitter account. “It is w/ profound sorrow, I must tell you that my life love General Chuck Yeager passed just before 9pm ET. An incredible life well lived, America’s greatest Pilot, & a legacy of strength, adventure, & patriotism will be remembered forever.”

Yeager’s death is “a tremendous loss to our nation,” NASA Administrator Jim Bridenstine said in a statement.

“Gen. Yeager’s pioneering and innovative spirit advanced America’s abilities in the sky and set our nation’s dreams soaring into the jet age and the space age. He said, ‘You don’t concentrate on risks. You concentrate on results. No risk is too great to prevent the necessary job from getting done,'” Bridenstine said.

“In an age of media-made heroes, he is the real deal,” Edwards Air Force Base historian Jim Young said in August 2006 at the unveiling of a bronze statue of Yeager.

…Yeager’s feat was kept top secret for about a year when the world thought the British had broken the sound barrier first.

“It wasn’t a matter of not having airplanes that would fly at speeds like this. It was a matter of keeping them from falling apart,” Yeager said. –CBS

Who will step up and be the courageous souls who push the limits that our next generation looks up to? Will it be another generation of astronauts headed for Mars?

Will it be some other kind of innovator?

Who still has ‘The Right Stuff’?