Unlike the endless stream of random leaks from unattributed sources, this guy puts his own name out there, and specifically names the culprits he’s accusing. 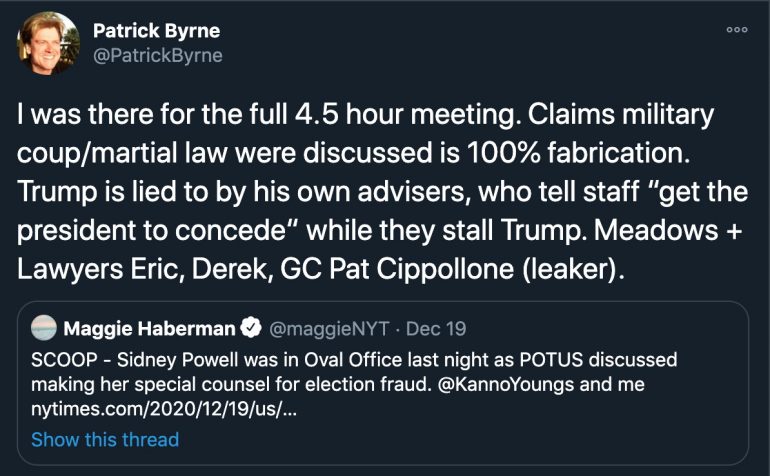 Patrick Byrne is no stranger to controversy, but unlike the anonymous leakers sniping from the shadows, he signs his name to his own work.

He also makes hard decisions for the greater good, like stepping down from the company he had built up from scratch when cancel culture came for him.

Byrne took the fall himeself and preserved all the jobs that cancel culture would have quite happily destroyed just to nail his scalp to the wall.

He has taken a particular interest in voter integrity issues, and despite having not voted for Trump, he believes Trump IS the real winner, and ought to keep fighting.

The people the President is surrounded with, on the other hand, not so much.

“I can promise you: President Trump is being terribly served by his advisers,” Byrne said, “They want him to lose and are lying to him. He is [surrounded] by mendacious mediocrities.”

…“It is 100% winnable. No martial law required. Sydney and Flynn presented a course that I estimate has 50% – 75% chance of victory. His staff just try to convince him to do nothing but accept it. As a CEO, my heart broke to see what he is going through. He is betrayed from within,” Byrne wrote, referring to former National Security Advisor Michael Flynn.

…Byrne said the president “wants to fight on.” Those opposing Trump’s plans are concerned with how such moves may be perceived in the media, according to Byrne.

“Meadows and legal staff led by GC Cippolone reflexively shoot down every sober discussion or idea presented. Their frame of mind is automatic: ‘We better not try that, it may not work, it would hurt your reputation in the press…’ No kidding, they say stuff like that,” Byrne said.

“They are bending over backwards to come up with reasons to tell him he can’t do anything. He needs to fire them all or he loses,” Byrne added. “He truly [believes] he won and he truly did win. I did not vote for him, but I don’t want to see our country hijacked in a psyop.” —EpochTimes

There’s a quote for occasions such as these, though from a somewhat different context…

We will not be driven by fear into an age of unreason, if we dig deep in our history and our doctrine, and remember that we are not descended from fearful men — not from men who feared to write, to speak, to associate and to defend causes that were, for the moment, unpopular. –Edward R. Murrow

If you prefer the Hollywood version, few said it better than those epic lines from Braveheart.

The surest way to lose a fight is to give up before the battle has been conclusively decided.

But Trump isn’t doing any of that.

And neither will we — isn’t that right, Clash nation? 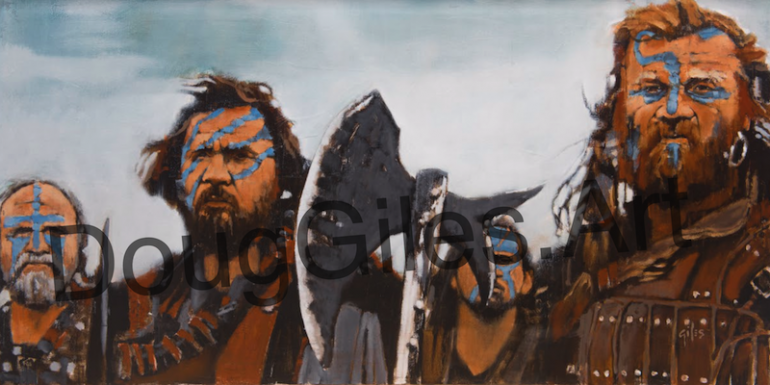 In times like these, our hearts can use all the stirring they can get.

Get your own copy of the Warrior-Poets print here.