Silicon Valley has had a ‘get out of jail free’ card in its pocket while pulling dirty tricks that would have hit any traditional publisher with solvency-threatening lawsuits.

When an ordinary publisher writes something that will injure or defame another party, such a dispute can be resolved in court. When someone uses a phone to do the same thing, nobody holds the phone company responsible because it exerts ZERO control over what people say over the phone lines.

Big Tech is supposedly an impartial platform (like the phone company in this example) and immune to lawsuits. But its behavior has been anything but.

They have been caught actively using their monopoly powers over information for the purpose of pushing voters toward information that would hurt Trump and help Biden, while actively suppressing any stories (like Hunter’s laptop) that would stop people from supporting Biden. They also targeted Democrats for get-out-the-vote efforts without giving similar prompts to Republicans…until they were caught red-handed doing so.

This is, in the eyes of many, a serious security threat in that it undermines the independent judgment of voters making their picks in an election, making it subject to the whims of information monopolies with unstated political agendas and uncertain financial inducements due to their relations with foreign powers.

Trump has now said as much. 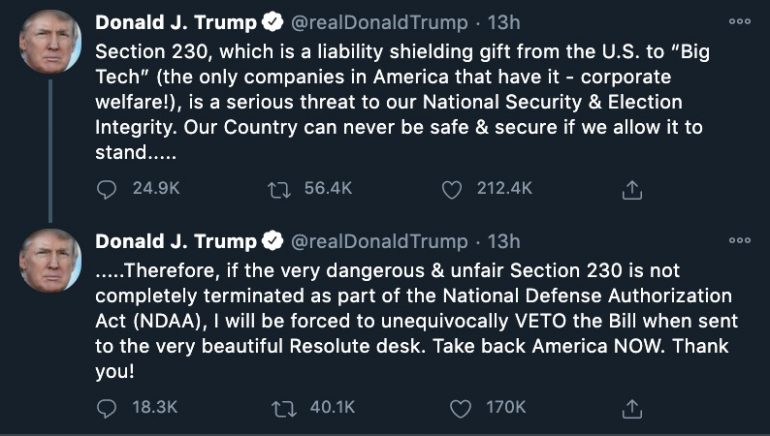 The defense act is a massive, crucial piece of legislation that authorizes, among many things, military pay raises and extra pay for troops on dangerous assignments. It has passed every year for the past 59 years.

While politicians from both parties have called for Section 230 to be weakened or revised, Trump and others on the political right have long complained that companies such as Facebook Inc. and Twitter Inc. have tried to suppress conservative opinions. The Trump administration’s wish to alter or even repeal the law has taken on greater urgency since the president was defeated by Joe Biden.

The White House has pushed for language that’s very similar to the Online Freedom and Viewpoint Diversity Act, a bill sponsored by Senate Commerce, Science and Transportation Chairman Roger Wicker.

“Section 230 has to be changed,” said Sen. Lindsey Graham, a South Carolina Republican and the chairman of the Judiciary Committee, said at a hearing last month in which Facebook Chief Executive Mark Zuckerberg and Twitter’s CEO, Jack Dorsey, answered questions. –Syracuse‘

Looks like we’ve got a political game of chicken on our hands.