It would seem that “wokeness” isn’t just a problem on college campuses and young, political activists. It’s crept into our public health administrations as well.

This was noted in an article that points out that the Center for Disease Control and Prevention (CDC) was considering social justice metrics when determining who should be at the front of the line to receive the COVID-19 vaccine.

Yascha Mounk is the Associate Professor of Practice at Johns Hopkins University’s School of Advanced International Studies, and founder of Persuasion, a left-leaning online magazine committed to promoting and defending the values and ideals of a free society in America and around the world.

Mounk wrote an article for Persuasion where he said that he is losing trust in institutions. The reason? The CDC nearly used “wokeness” as a metric for the rollout of the COVID-19 vaccine rather than relying on ethics and science.

The article opened this way:

The first is that we should avoid “leveling down” everyone’s quality of life for the purpose of achieving equality. It is unjust when some people have plenty of food while others are starving. But alleviating that inequality by making sure that an even greater number of people starve is clearly wrong. The second is that we should not use ascriptive characteristics like race or ethnicity to allocate medical resources. To save one patient rather than another based on the color of their skin rightly strikes most philosophers—and most Americans—as barbaric. The Centers for Disease Control have just thrown both of these principles overboard in the name of social justice.

While Mounk notes that it’s always difficult to balance the needs of different groups and he doesn’t envy those who have to make the decision, some things just seem to make sense, like… don’t discriminate based on race. Seems simple enough, right?

Apparently not for the CDC.

On November 23, Kathleen Dooling, a public health official at the CDC, gave a presentation to the Advisory Committee on Immunization Practices (ACIP) which is the panel that will determine who will get the vaccine first.

Dooling’s presentation laid out three different metrics for evaluating whether 87 million “essential workers” or Americans over the age of 65 should be next in line: feasibility, science, and ethics. According to the CDC’s own evaluation, considerations of feasibility give us reasons to prioritize older Americans. This makes sense. It is both difficult to determine who should count as an essential worker and to communicate to people who do fall into that category that they are eligible. A straightforward age cut-off makes it easier to decide who’s in and reach the target population. As a result, prioritizing the older 65s leads by this metric.

What’s so atrocious about this is that Dooling recommended that the essential workers be prioritized over those 65 and older because “racial and ethnic minority groups are underrepresented among adults > 65.” Basically, older people are just too white.

According to the CDC’s modeling, not prioritizing the elderly could “increase the overall number of deaths by between 0.5% and 6.5%” meaning thousands of Americans over 65 would die. Dooling called the differences in consequences “minimal.”

Throughout the presentation, “ethics” was allegedly a consideration, but the definition leaves much to be desired. Dooling determined that it was far more ethical to prioritize the nebulous group of “essential workers” who can be asymptomatic and are far less likely to have adverse reactions to this virus than the elderly who are much more likely to die if they are infected — and they seem to have made these decisions based on considerations of race. 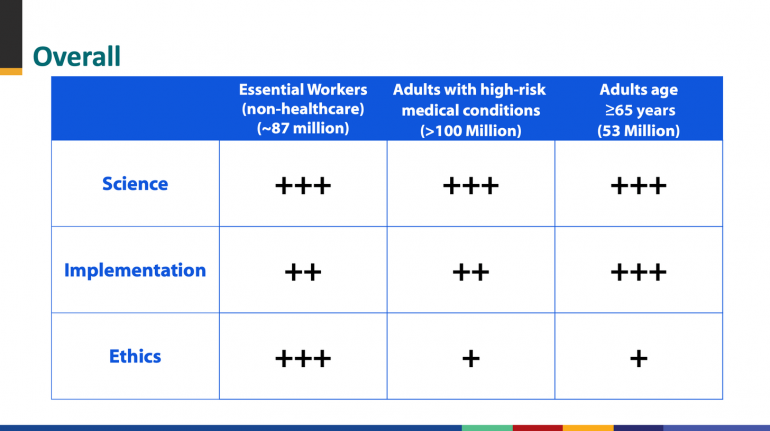 Her recommendation to prioritize “essential workers” was approved unanimously.

What’s even worse than this, is that this difference in race among the groups under consideration is not really that significant. The death rate, on the other hand, does seem to affect particular races differently.

In other words, the CDC was effectively about to recommend that a greater number of African-Americans die so that the share of African-Americans who receive the vaccine is slightly higher. In blatant violation of the “leveling down objection,” prioritizing essential workers in the name of equality would likely kill more people in all relevant demographic groups.

What’s also disturbing is that there was very little pushback from “medical experts” who rely on The Science™ for their recommendations to the public. Mounk wrote, “As criticism of the recommendations mounted, epidemiologists mostly circled the wagon.” He continued, “But thankfully, the pressure was too strong to ignore. At a meeting that had, before the mounting controversy, been expected to rubber-stamp the recommendations that had already been unanimously accepted, ACIP changed course.”

The new recommendations are much more complicated than the simple 65+ recommedation. Now, it looks like this:

Mounk notes that this isn’t much of an improvement.

Since over half of all deaths from Covid have so far occurred among Americans over the age of 74, this is an undoubted improvement over the initial guidance. But, for two reasons, it too probably sacrifices American lives on the altar of social justice. First, vaccinating Americans over the age of 74 over the same period of time as frontline essential workers will significantly delay when some of those who are at greatest risk will receive the vaccine. And second, starting to vaccinate Americans between the ages of 65 and 74 after 30 million frontline essential workers will still put a large group with a comparatively low risk of death ahead of a large group with a significantly higher risk of death.

Despite this very clear data, Dooling again called the difference in results from implementing an age-based approach and the more confusing updated recommendation “minimal.”

The new approach was approved on December 20 with a vote of 11-1. Interestingly, the updated approach no longer includes an estimate of how many more people are likely to die if states follow its recommendation.

Now it’s up to the states to decide how the rollout works. Florida and Texas have both committed to prioritizing the elderly ahead of “essential workers” in order to save lives. Let’s hope more states follow suit.