All eyes have been on the tension over that Chinavirus financial relief bill… it’s easy to forget there was another piece of contested legislation. But Trump didn’t forget.

With companies like Facebook and Google getting busted for active involvement in tilting this election in favor of the Democrats while exploiting their unique protections from prosecution — Trump has been sounding the alarm on just how big a threat this is to the stability of a free and fair election where the people get a *meaningful* say in what the national priorities are, and who is entrusted to lead us.

Now that light has been shed on just how partisan their performance has been in the last few months, literally changing the outcome of the election by spiking stories that would have boosted Trump (like jobs numbers and Middle East Peace progress) and stories harmful to Joe Biden (in particular, Tara Reade and Hunter Biden’s laptop), we can’t claim they are neutral parties just going about their business.

We’ve known for years that Silicon Valley openly fantasized about a ‘civil war’ in which they force-fed their Blue State values to red-state America whether they wanted them or not — and cited California as their template. They weren’t talking about a war with muskets, but one where technology and information control used propaganda and ignorance to push people to make pre-ordained choices their tech overlords approved of them making.

The half-billion dollars Zuckerberg dumped into key Democrat districts in a GOTV effort in battleground states — using his strings-attached big-dollar donations to hijack the efforts of civil servants themselves in his cause — shows us that this was never a fair fight, nor did these billionaires have the slightest interest in what the will of the people ACTUALLY was. They only cared about manipulating them as a means to an end, anointing leaders whose agendas aligned with their own.

Trump made one specific point clear with the signing of his intention to veto any version of the NDAA that does NOT strip behemoth monopolies from their special exemption from legal action. Since this was not addressed, together with other issues he has taken with the latest NDAA, Trump is keeping that promise of vetoing it. 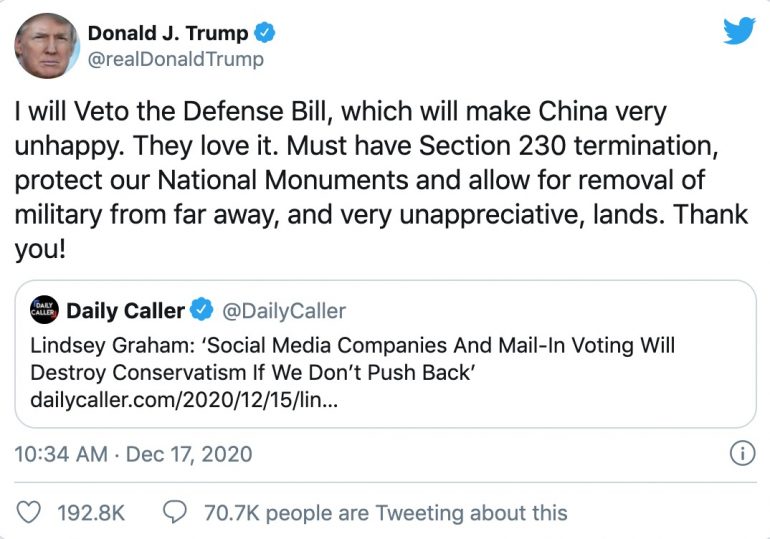 “It has been suggested that we should rename as many as 10 of our Legendary Military Bases, such as Fort Bragg in North Carolina, Fort Hood in Texas, Fort Benning in Georgia, etc. These Monumental and very Powerful Bases have become part of a Great American Heritage, and a history of Winning, Victory, and Freedom,” Trump tweeted earlier this year.

He also expressed frustration with language in the bill which would make it harder for troops to be brought home from Afghanistan. President Trump has repeatedly called for the US to scale back its military operations in the Middle East.

Republican Senator Rand Paul has affirmed Trump’s position on the NDAA, especially in regard to the provisions related to Afghanistan. According to Paul, neoconservative politicians support “substantiating war and making sure that it becomes and is perpetual war.” Paul has further stated that he would push against overriding Trump’s veto.

…Meanwhile, House Minority Leader Kevin McCarthy voted in favour of the bill, but has said he will not support overturning President Trump’s veto. “My point has always been, when I became a leader, I would not vote against the president’s veto. I will hold up the president’s veto,” McCarthy said. “We’ve always worked together to make bills better.” — PostMillenial

And now, he’s vetoed it.