It’s the tricky question we all have to raise with taking any bold stand — where is the right place to draw that line? One Texas legislator thinks that time is now.

Even before SCOTUS blew off the right for Texas to have a hearing of its grievances, the rumblings were beginning.

Have we become a nation where wealthy elites hold powers over the rest of us that entirely eclipse the will of the people? Is there an active attempt on the part of elected officials in Federal roles to remake red states in their own image, whether we like it or not?

Is corruption in the legal system and the American media so politically inbred that the conclusions are known even before a political case can be taken up?

Are the divisions between red state and blue state so sharp that they can no longer be bridged?

At least one politician thinks the answer to that question might be ‘yes’… and is doing something about it.

Following that link brings you to this: 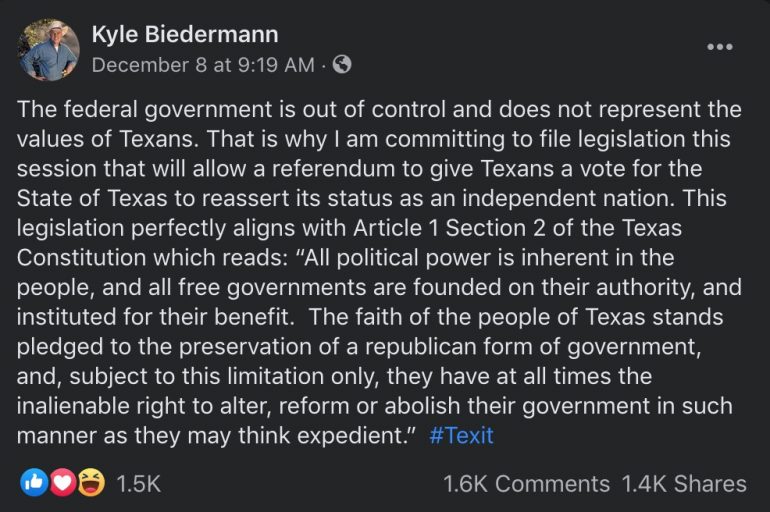 It’s an interesting point he raises.

The entire rationale for Independence in the first place was the consent of the governed.

If an oligarchy of elites is emerging that runs roughshod over the established rules of the Constitution… is it even accurate to say America still has a right to call itself a Republic?

If America generally abandons a Representative Republican model of government, is Texas under any obligation to follow America down that self-destructive path?

It’s an interesting question with a HELL of a lot of implications, no matter how you slice it.

But at the heart of them all is a question the Founders themselves were so familiar with… the Consent of The Governed.

It’s basically the same question the West Coast was openly wrestling with 4 years ago.

There will always be some brash people who want to pull the trigger on a decision like that one no matter what, and some who will be so timid they would sooner let themselves be ground into the dust than take a dangerous stand.

But somewhere between those two points, is a line that reasonable patriots might draw as a hill to die on.

The question is, are we there yet?