Years before becoming Governor of California, Gavin Newsom founded a wine store called PlumpJack Wines. Under his leadership, this organization grew into PlumpJack Management Group LLC. Here’s what the Plumpjack website says about its history:

In 1992, Gavin Newsom founded San Francisco’s popular PlumpJack Wines on Fillmore Street on the principle of making wine buying more approachable in a friendly, non-intimidating manner to transform the wine purchasing experience into one of fun and discovery.

Since then, The PlumpJack Group portfolio has expanded to include a diverse collection of hospitality and lifestyle businesses including boutique hotels; award-winning wineries; restaurants and bars; and retail establishments, as well as the PlumpJack Development Company.

Just before Newsom took office as Governor in 2019, he put all of his business holdings — including PlumpJack — into a blind trust. He is no longer affiliated with the operations of PlumpJack, but is still listed as its founder while his sister, Hilary Newsom, is listed as “President/Partner” of PlumpJack. So, clearly, the business is still in the family.

According to a report by ABC 7 News, at least 9 businesses within the PlumpJack Group have received $2.9 million in Paycheck Protection Plan (PPP) Loans through the  Small Business Administration program. 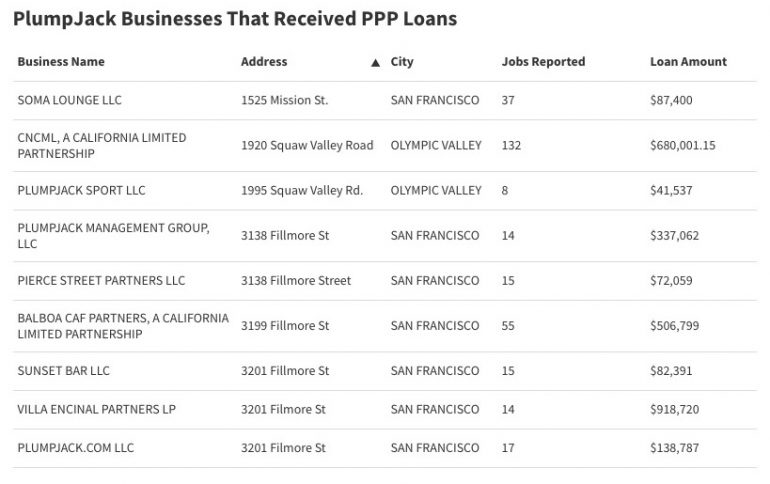 Discrepancies in publicly available data and what is written on the loan applications is raising some eyebrows over at ABC 7 News.

From the ABC 7 report:

According to SBA data, the company [Villa Encinal Partners LP] received a loan for $918,720 on April 14, 2020. The SBA expects 60% of the loan must be used towards payroll. Based on SBA’s data, which indicated this business retained 14 employees, if divided equally, each of them would receive around $40,000 to cover their payroll over a period of three months. Hypothetically, that would amount to an annual salary of around $160,000 per employee.

“It’s unexpected for a 14 employee organization to get nearly $1 million.”

Sean Moulton is a senior policy analyst with Project on Government Oversight or POGO. He specializes in tracking PPP funds.

“The purpose behind this program was to save, you know, entry-level jobs, people going in and working on that paycheck. That was what we put this out there for — to stop unemployment.”

To put it in perspective, our analysis found the other California that received close to the same loan amount as Villa Encinal Partners is Oak Knoll Farming Corp. The company retained 79 employees — more than five times as many as Villa. The average number of employees retained for every California winery that received more than $900,000 in PPP loans is 148.

ClashDaily has reported that there were some real problems with the PPP program rollout. While it was aimed at small businesses, there were some very big companies who bellied up to the trough and squeezed out the little guy. Most recently, ClashDaily reported that a company owned by the current husband of a certain member of the AOC “Squad” had received more than a half-million dollars in PPP and Economic Injury Disaster loans (EIDL) combined after raking in $2.25 million from his wife’s campaign since the beginning of 2020.

Although Newsom has put his business interested in a blind trust, his 2019 Statement of Economic Interest, he has an ownership interest in 8 companies affiliated with PlumpJack that received PPP loans, including Villa Encinal Partners LC.

The kicker? The loans are just 1% — essentially free money for the companies — but they still have a few years to apply for loan forgiveness, so they may not even have to pay it back.

Rubbing salt in the wound is a little side-note in a Daily Mail article about actress Justine Bateman signing a petition to remove Gov. Newsom from office due to his ridiculous lockdown mandates — his PlumpJack Winery is still open for reservations and tastings despite imposing a statewide shutdown on both indoor and outdoor dining.

He has recently caught flack for shelling out $80 million for public health billboards relating to the Covid-19 pandemic while ignoring the needs of small businesses suffering due to shutdowns.

Newsom has shuttered schools across the state, while his four children attend an in-person private institution.

His Plumpjack Winery in Napa Valley remains open for reservations and in person tasting despite statewide shutdown of restaurants.

So, in short — the Mom and Pop shops get screwed again while Nancy Pelosi’s nephew, Gavin Newsom, and his billionaire buddies wine and dine with their close, lobbyist friends at fancy Napa Valley eateries that cost $300 per person and rack up a $15,000 bar tab and laugh all the way to the bank.

Oh, it’s good to be a rich, connected Democrat!