In a world where everything is a ‘bombshell’ or a ‘smoking gun’ the testimony of Melissa Carone was dramatic in its mostly simple and matter-of-fact recounting of precise details.

These are the kind of precise details that give any honest observer pause about just how wide-open for exploitation our system really can be. At one of her more impassioned moments, she expressed her belief that ‘everything that happened at TCF center was fraud. Every single thing. Every avenue was taken to commit it.’

In an election season where so very many political operatives — government, media, protesters, civil servants among others — had skin in the game and the critical ‘means, motive and opportunity’ that investigators look for in a criminal case, a system wide open to exploitation in a charged environment such as ours is especially bad news.

Stack up all the weird irregularities happening at the very same time in each of these battleground states, and you have solid grounds for anyone to start asking a few probing questions… especially when these irregularities all tilted to the benefit of the same party, and Biden’s ‘comeback’ somehow managed to overcome staggering stastical probabilities. Exactly like the formal media narrative of the ‘red mirage’ predicted.

What a weird coincidence, eh?

Here’s the testimony of an eyewitness, herself an independent IT contractor working the elections, putting some more meat on the bone of the fact-gathering. Unlike so many of the media talking heads, she’s giving HER input under oath, with a penalty of perjury.

She came prepared with names of people she had worked alongside of and interacted with, came with physical evidence, came with the training binder she had been provided in her orientation with the machines, all kinds of details.

Quite a few interesting things in this testimony to be honest. In particular, her reference to the re-scanning of ballots, and the workers’ lack of formal training on these machines.

Scott Adams was not the only one thinking this: 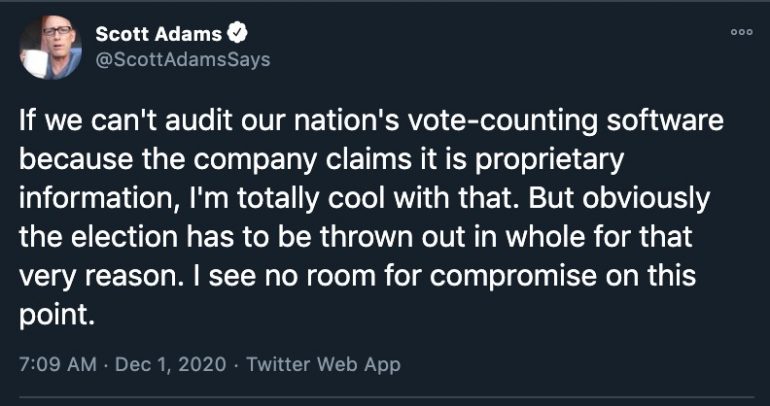