This is the key piece that incendiary media blowhards carefully leave out of any story trashing the Republicans calling for 10 days of auditing the 2020 results.

It was never a call for ‘overturning the election’, it was a call for confirming that the result was based on the expressed political will of valid voters.

As we have seen from the reforms which took place in Florida over the past few years, a little transparency can go a very long way in restoring confidence in the vote.

But for that transparency to do any good, it also needs to be timely. If the public feels like legitimate concerns about one or another aspect of the process were intentionally slow-walked to favor one outcome over another, that sows distrust in the system.

It is very unlikely the timing of this story will do anything to help rebuild trust in the objectivity of this process.

Literally two minutes before Joe officially took his oath of office, this headline popped up on the internet. 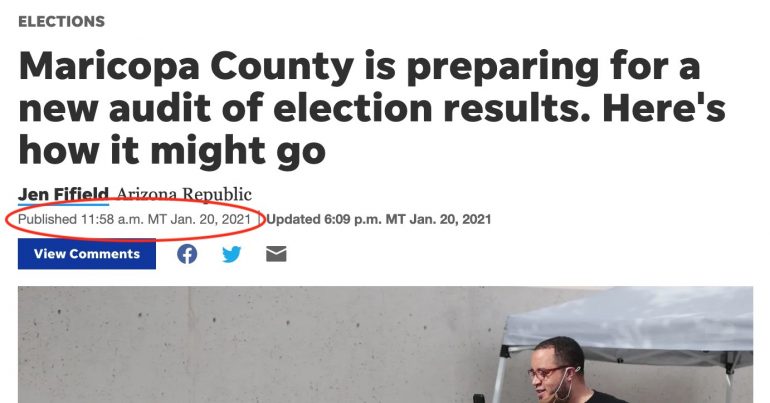 Unsatisfied with some aspects of the first audit, Arizona Senators had issued 2 subpoenas on December 15th, requiring an additional independent audit. Election supervisors fought these subpoenas in court.

With Joe now safely sworn in, Maricopa County Board of Supervisors has come to an agreement with State Senators as to how they will comply with demands for further auditing.

A list provided by Senate Republicans shows what could be included in the agreement, including, but not limited to:

The county will provide images of ballots.
An audit will be performed including a logic and accuracy test on a random sample of tabulation machines and a review of the source code on a random sample of tabulation machines.
The audit will only examine material related to the “2020 election.”
The auditor will be certified by the U.S. Election Assistance Commission and will have access to a “random sample of desktops, servers, and routers” in a way that wouldn’t disrupt county operations.
Only authorized parties would have access to data or materials provided by the county.
The parties will “work together in good faith” to resolve issues arising during the audit.

Public servants are a necessity in a government-heavy nation like ours, but once they are perceived as partisan activists, that becomes just as corrosive to the electoral system as any paid-off referee or judge would be to athletics or the justice system. And for the same reason.

If this writer had any say in the process, running ballots through that optical scanner Pulitzer developed would also be added to this list.

There won’t be any changing the result of 2020, but we can sure as hell make some necessary changes before 2022.