Anyone with an ‘R’ after their name is routinely tagged by big tech for various kinds of infractions relating to ‘misinformation’. But all of their big-government buddies somehow get to sidestep that problem again and again.

It wasn’t long until it became abundantly clear that WHO was more intent on shielding China’s CCP from scrutiny and accountability for their role in unleashing this virus on the world and. Even worse, they were far more interested in covering up the crisis than they were in giving the rest of us time to prepare.

International airports remained open long after regional ones had been closed. One doctor who tried to warn the world was silenced by the CCP. Foreign journalists were thrown out of the country. But we’re supposed to pretend like none of that serves as evidence that China knew just how big a problem was about to break loose on the world.

The report from the intelligence-sharing alliance of the five leading English-speaking countries — the US, the UK, Australia, New Zealand and Canada — called China’s shady handling of the virus “an assault on international transparency.”

The paper described how China downplayed the outbreak around the world while wildly scrambling to bury all traces of the disease at home, including bleaching wet market stalls, censoring the growing evidence of asymptomatic carriers of the virus and stonewalling other countries’ requests for samples.

Beijing started censoring search engines as early as December to stop internet surfing related to the virus, according to the report. The World Health Organization went along with China’s claims and also denied human-to-human transmission of the virus despite concern from neighboring countries.

Intelligence showed that China had “evidence of human-human transmission from early December,” but continued to deny it could spread that way until Jan. 20, according to the dossier.

The document pointed out that China imposed travel bans on people throughout the nation, but continued to tell the rest of the world travel bans were unnecessary.–NewYorkPost

And what did the WHO actually do? They parroted CCP Propaganda.

A supposedly ‘global’ organization whose responsibility was supposed to include ‘science’ and ‘protecting the world’ from viral outbreaks suddenly seemed a lot more like a partisan Chinese organization protecting the Chinese Communist Party from negative publicity or blame.

Here is a sampling of some of key dates listed in this Reuters piece. (Remember, ‘early December’ was when person-to-person spread was known. And that’s not even accounting for instances that indicate that American cases date back to at least December 2019, and European cases may trace back as far as September 2019.

2019
Dec 31: World Health Organization first notified by China of “pneumonia of unknown cause”. WHO says its China office picked up a report of “viral pneumonia” from Wuhan Municipal Health Commission website and asked Chinese authorities for more information.

Jan 11: After reporting the first official fatality from the disease, China shares genome sequence of the coronavirus with WHO.

Jan 28: President Xi meets Tedros in Beijing and says China has responded in a timely, open, transparent and responsible manner, and is ready to work with the WHO and the international community.

Feb 24: Joint team holds news conference in Beijing and says China’s actions slowed the spread of the epidemic and prevented or delayed hundreds of thousands of cases.

Feb 28: Joint team publishes report praising the “remarkable speed” at which China isolated the virus, established diagnostic tools and learned how the virus was transmitted.

April 14: President Donald Trump announces halt to U.S. funding for WHO, accusing it of being biased towards China and failing in its duties.

July 8: United Nations says it received formal notice from the United States to withdraw from WHO. President Trump accuses WHO of “alarming lack of independence” from China.

Here is the guidance they gave on mask-wearing, back in March. (Keep in mind, if any of us DARE not to wear a mask in public now, we are the moral equivalent of serial killers.) 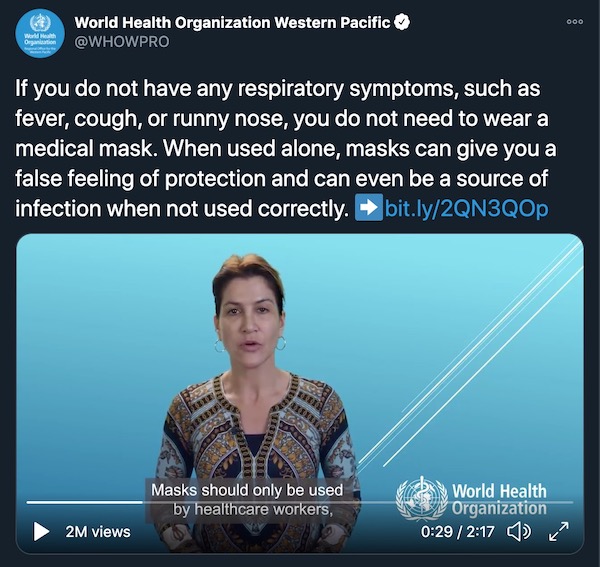 If you click the link, there’s a little video message warning against regular people wearing masks and everything.

That video went out on March 26th. It was sent out by WHO. It is STILL not labeled as ‘misinformation’. Maybe they’d care if Trump had retweeted it?

If the WHO has shown more commitment to aligning with a propaganda coverup of government malfeasance than they have in helping resolve a medical crisis, can someone please explain precisely why WHO deserves even one slim dime of taxpayer’s money?

Go ahead, take as long as you need.