What’s the perk about having a non-campaign to become President? Fewer promises to break.

That isn’t going to get in Joe’s way of breaking the promises he DID make right out of the gate. To be fair, much of that comes from advancing an agenda in direct conflict with trivial matters that get in the way of full implementation… trivial things like reality.

For example, he is a good and compassionate leader. We know that because he and his media flunkies keep telling us so. Which means it must be true, right?

To prove how good and compassionate he is, he wants to push through a national minimum wage of $15/hour.

Does that nationalization of the economy account for the fact that some businesses don’t have the profit margins to accommodate that wage, or that many businesses will close down as a result, or that fewer entry-level jobs will be available for unskilled and after school labor?

Nope. The man has been buried like a tick into the body politic, feeding off the taxpayer (directly or indirectly) for his entire adult life. What the hell does ‘lunchbucket Joe’ supposedly from ‘Scranton’ actually know about blue-collar work?

The Congressional Budget Office predicts 1.3 Million lost jobs, or up to 3.7 Million jobs. Joe doesn’t care, he just wants to brag that he raised wages.

Do you know how TRUMP got wages up? He drove supply-side pressures in the labor market up. Employers were competing for the best workers and incentivized to pay them accordingly. More jobs chasing fewer employees = higher wages.

Joe on the other hand has the opposite: More employees chasing fewer jobs =lower/stagnant wages

He also cares about women and minorities, right?

Except that with the stroke of a pen, he may have killed women’s sport by forcing athletic programs to accept born-masculine bodies competing with young women in ladies’ athletics.

Ladies who have taken the time and energy over several generations to build a parallel system of athletics so that they would have an opportunity to display their athletic ability without being overshadowed by the testosterone-fuelled physical prowess of their male counterparts will have it all come crashing down with the stroke of a pen.

Masculine bodies have a simple biological advantage. Look no further than the difference in athletic records right on down the line. Young ladies are already complaining that biological males have been blowing them away in ladies’ events at track meets.

This could affect scholarships and a variety of other opportunities for otherwise well-qualified women. Thanks Joe!

And what about minorities? He’s alert to the dangers of angry white dudes who lurk behind every corner looking for some poor soul to terrorize, right? To hear his campaign rhetoric, you’d think there’s an awful lot of that going around.

Even a group THIS all-in on the woke agenda disapproves of Joes initiative: 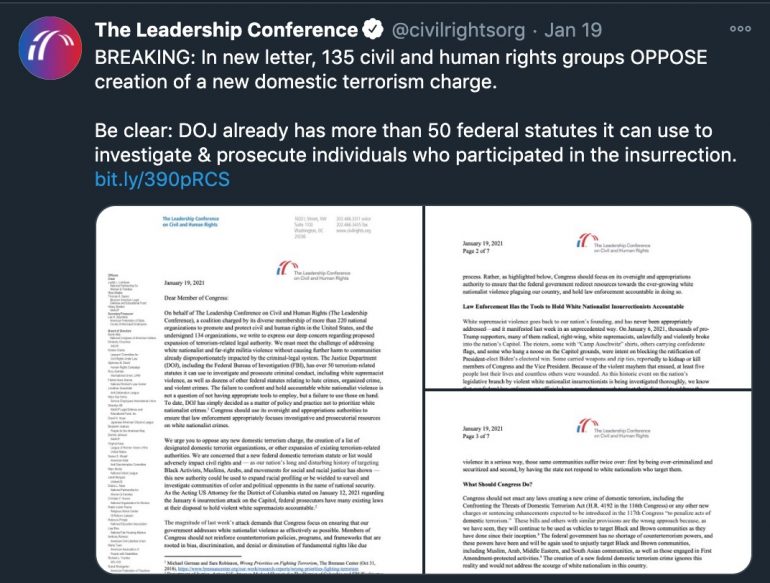 The Leadership Conference on Civil and Human Rights sent the letter on Tuesday, which warned that if members of Congress increase law enforcement’s role in combatting white nationalist terrorism, this will only cause increased negative effects for minority communities that are “disproportionally impacted” by the legal system.

“We are concerned that a new federal domestic terrorism statute or list would adversely impact civil rights and — as our nation’s long and disturbing history of targeting Black Activists, Muslims, Arabs, and movements for social and racial justice has shown —this new authority could be used to expand racial profiling or be wielded to surveil and investigate communities of color and political opponents in the name of national security,” the letter reads. —MSN

Yikes. If you’re too woke for THAT crowd, you’re pretty far gone.

What about Scranton Joe and those Union Jobs?

He set about killing off those jobs right from day one. Steel jobs. Manufacturing jobs. Oil jobs. But not just that. Schools in at least one blue state were dependent on that oil money. They voted for Joe, only to get an income stream that supported their children’s education pulled out from under them at the stroke of a pen.

All we really wanted was for you to NOT break anything while you were in office.

Obviously, that was too much to ask.

Not even a week yet, and here we are.

Conservative Pundit Stumps Transgender Activists on ‘Dr. Phil’ with ‘What Is a Woman?’ Question
January 21st, 2022 Flag And Cross

Taxes in California are projected to DOUBLE as the failed state forces residents to pay $1,000 a month for Universal Sick Care
January 21st, 2022 DC Dirty Laundry