Twenty-Twenty has been one hell of a year, and in many ways, it’s good to put it behind us. But of course, everything that made 2020 suck won’t be turning off with the simple flick of a switch or flip of a calendar page.

Big Tech is still an issue that we’ll need to grapple with — especially considering how cozy they’ve become with China and their habits of censoring any ideas of which they do not approve.

China, and their censorship habits, happens to be at the center of another Venn diagram of what sucked most about 2020, namely the Chinavirus and all the havoc that has played with the life of individuals and economies on so many levels around the world.

But, in our traditional rowdy and defiant spirit of mocking the issues stacked against us, rather than whining about them, let’s take a moment to laugh at the whole situation.

With so much of our lives going online this past year — a little too much in the case of people like Toobin — and so much of life becoming about ‘social distancing’ it’s past ironic that robots can now have more of a social life than so many of the poor plebes who have to ask their governor’s permission to go out on the town and spend time with real, live people. 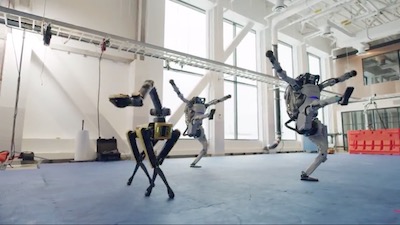 And quite honestly, better moves than a lot of us too. For those of us who grew up watching Terminator flicks, the ‘Skynet’ potential here is a little unsettling.

It’s a lovely little metaphor for how Silicon Valley has been gradually taking over our lives.

But that’s not the only dancing we’ve seen during our COVID lockdowns.

The Chinese spyware app, TikTok was ripping it up this year with organized dance numbers from all around the world.

Many of them were just kids showing off in their livingrooms or whatever. But there was another trend that caught on while the rest of us were on lockdown.

Videos like the ones featured in this mashup of a Governor warning about overloded hospitals while, well, this happened:

Some of us have actually been paying attention to how our ‘betters’ in the government have been playing this game. Shifting goalposts since the beginning, we’ve been around long enough to remember what these lockdowns were supposed to accomplish… officially, anyway.

Do you remember that slippery phrase ‘flatten the curve’? The goal was never to keep people from getting sick. Nobody really believed we could all avoid the virus.

The goal was to keep the number of ICU beds from being so overwhelmed by Chinavirus patients that they couldn’t treat them all at the same time. We sent a hospital ship to NYC that was never used, and built a temporary hospital that was left empty.

The fear of this virus has kept untold numbers of patients from using all the other services that hospitals have to offer — including early screening for life-threatening diseases.

We were also so dangerously low on PPE that we needed to repurpose American factories to make emergency supplies of masks etcetera.

All of these dancing nurses somehow seem to have plenty of PPE on hand, don’t they?

Almost enough to make you feel like someone’s been gaslighting us, isn’t it?

Which video is creepier?