‘No good deed goes unpunished’ is generally the case with government bureaucracy, but for once, someone intervened to keep it from happening this time.

Remember when the world was panicked about global shortages of hand sanitizer? Hand sanitizer was the one thing standing between us all and certain death, but there was none to be had for love or money.

That’s when distilleries, who had no open bars whom they could to sell their alcohol anyway, they retooled and repurposed their factories to fill that shortfall.

And what happened after that? The government behaved as its typical shortsighted self.

Those included the $14,060 Monograph Drug Facility Fee and a $9,373 Contract Manufacturing Organization Facility Fee. Those fees were set to come due on Feb. 11, 2021, according to the Distilled Spirits Council.

The Distilled Spirits Council said Thursday that distilleries and other facilities that produced hand sanitizer were shocked to learn of the fee on Tuesday from the Food and Drug Administration. –KHOU

That was the slap in the face of thanks they were getting until an outraged public pushed back.

So much for ‘all in this together’, eh?

Fortunately, this is NOT where their story ends. 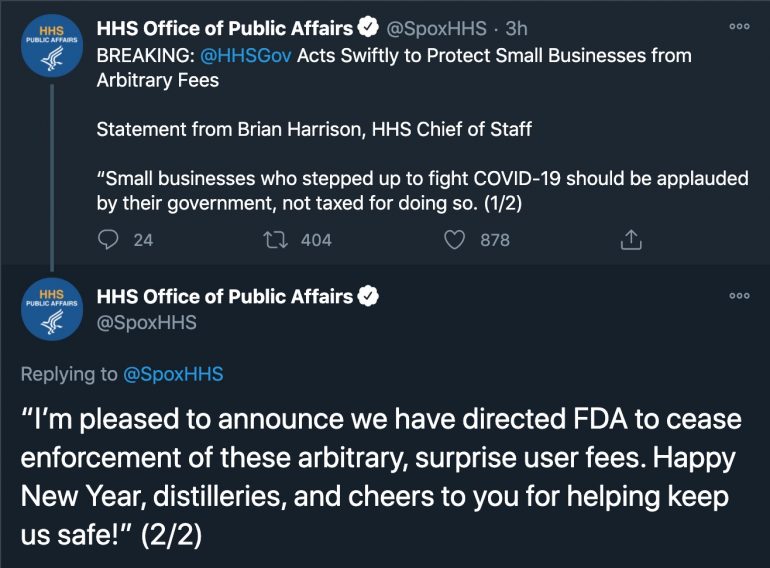 Distilleries that made hand sanitizer amid a shortage earlier this year were shocked to learn this week that the Food and Drug Administration (FDA) was slapping them with a $14,060 fee, but in a reversal Thursday night, the Department of Health and Human Services directed the FDA to cease enforcement of the fees.

“Small businesses who stepped up to fight COVID-19 should be applauded by their government, not taxed for doing so,” HHS Chief of Staff Brian Harrison said in a statement.

“I’m pleased to announce we have directed FDA to cease enforcement of these arbitrary, surprise user fees. Happy New Year, distilleries, and cheers to you for helping keep us safe!” –FoxBusiness