Photojournalist Jade Sacker was with a left-wing BLM agitator when the Capitol building was breached. In a recently-released video, Sacker gives Sullivan a hug and says, “We did it!” in what appears to be a celebratory manner.

Sacker has worked with multiple news outlets including CNN and NPR.

We know that CNN is “fake news” and the same can be said about NPR. Remember how they didn’t want to cover the Hunter Biden laptop story? Well, now they’re really digging into the Biden family…

That right there is an embarrassment to journalism.

Here are Sullivan and Sacker appearing on CNN talking about the death of Ashli Babbitt. Note that Anderson Cooper introduces Sacker as a “documentary filmmaker” and not a CNN employee.

What’s so gross about this is that it appears that Sullivan was involved in the incidents that led to the shooting of Ashli Babbitt. No mention of that on CNN.

VIDEO: Is THIS The Smoking-Gun Evidence Of What Incited The Riot And Led To Her Death?

Here is the new video filmed by Sullivan showing Sacker saying, “We did it!”

BREAKING: CNN’s Jade Sacker penetrating the Capitol with a member of BLM/Antifa cheering, “We did it!” And then asking her conspirator if he was filming, he said he’d delete it, he lied. CNN was in on it. pic.twitter.com/FVhotiAwcP

Max Blumenthal posted the video on Twitter and is now saying that “Republicans pounced” and are “seizing” on John Sullivan as proof that left-wing agitators were responsible for the breach of the Capitol.

John Sullivan was at the forefront of pro-Trump violence in the Capitol, egging it on as he filmed.

Now he’s Exhibit A in right-wing claims that Antifa instigated the riot.

I investigate his disturbing history of sabotaging BLM while posing as a leader. https://t.co/Euts3d7vkz

Seated w/Sullivan on CNN is Jade Sacker, a photojournalist who followed him into the Capitol to film his exploits as part of a documentary project. Here she’s heard congratulating him – “We did it!” – and he says, “Is this not gonna be the best film you’ve ever made in yr life?” pic.twitter.com/KWLVfgKPA7

It’s important to note that Blumenthal is a former Media Matters for America writer. Media Matters made it explicitly clear in their “War Plan 2017” that their goal is to silence conservative media. So, take any claim about Sullivan being a right-winger with that in mind.

Bias is just as prevalent a thing on the left as they claim it is on the right.

Blumenthal is desperately trying to distance Sullivan from leftist protest movements because his behavior is damning to the narrative that it’s just right-wing agitators that stormed Congress.

I studied video shot by Sullivan (Jayden X) in the Capitol and compiled some moments of him zealously celebrating the invasion & instigating the mob all the way up to Ashli Babbit’s shooting. Watch with audio on.

No committed BLM activist would say or do this – and he isn’t one pic.twitter.com/uE5VmUf6mU

Some of those “exposing” Sullivan as a super-secret “fascist” on the left have posted his multiple social media accounts. 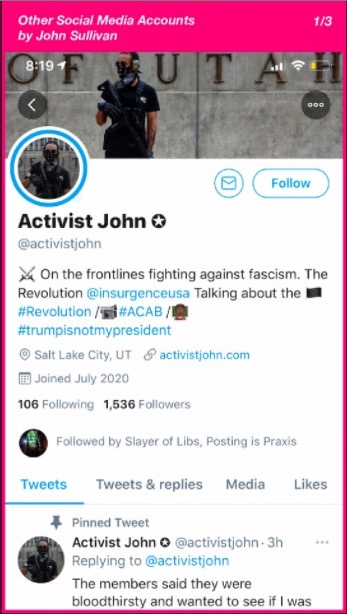 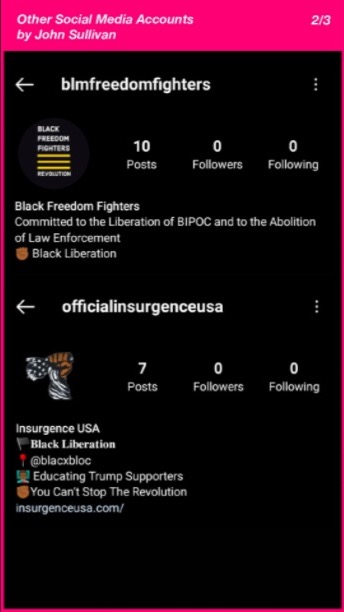 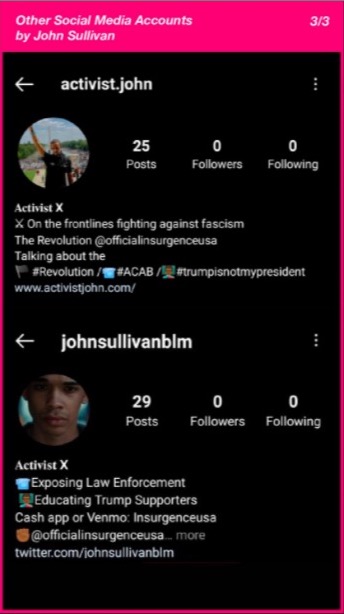 “Activist John” Sullivan has been detained on federal charges.

But Sullivan wasn’t the only one who may have been a leftist agitator in disguise, however. Another man arrested for breaching the Capitol is a registered Democrat and the son of a New York judge.

Now that’s just two people, but many who were there claim that there were people that didn’t seem to fit into the MAGA crowd.

Also, award-winning war correspondent, Michael Yon, who has covered hundreds of protests — including the ones in Hong Kong where Antifa infiltrated to learn tactics said, “Antifa clearly led the attack. That was utterly obvious.”

Here is an interview with Michael Yon saying that Antifa was using “agent provocateur tactics.”

It’s not clear, but so far, the arrests haven’t been exclusively Trump-supporters. The Media(D) hasn’t exactly been forthcoming with that information, however.

We’ll see how this plays out and let’s hope that we will actually learn who it is that was responsible for this atrocious breach of the Capitol.

As for CNN… well, some things never change, apparently.