When HE says it, this will be embraced as the pragmatic realism of a leader having to choose between bad options. When WE said it, we were science-denying-grandma-killers.

But when you’ve literally got immediate family members in the media rewriting both the news and COVID’s actual history in your favor, you never really have to worry about giving an account of your administration’s epic failures, do you? 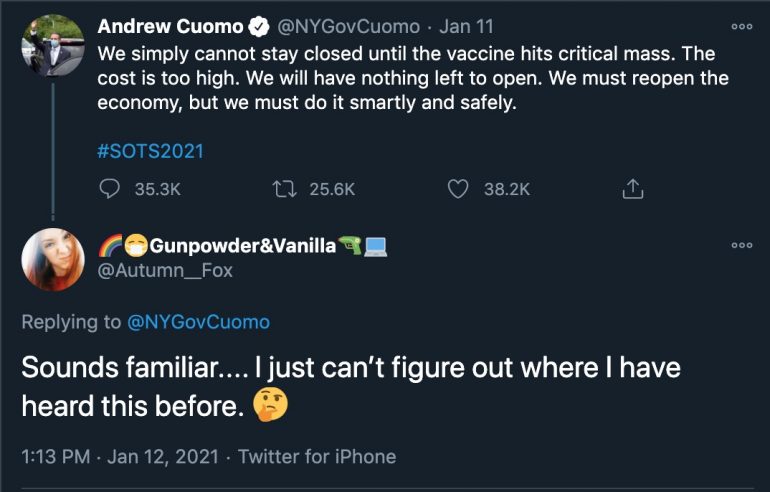 Gov. Andrew Cuomo pledged New York will vaccinate millions and jumpstart its flagging economy in 2021 as part of his annual address to the state that began Monday.

The governor’s address — which will continue throughout the week — comes as the state tries to balance reopening its economy with ending a pandemic whose death toll is now nearing 40,000 people, according to data collected by the John Hopkins University School of Medicine. New York’s hospitals and nursing homes have recorded nearly 4,100 new deaths of people with COVID-19 over the past 30 days, and the state is now seeing more new COVID-19 cases per-capita than 35 other states.

…The pandemic is still hitting large swaths of the state: about 136,000 people have tested positive for COVID-19 since Jan. 1 alone, while nearly 8,900 new COVID-19 patients have entered hospitals. The governor has set high standards for new restrictions on businesses and houses of worship in hard-hit areas of New York that could only kick in once hospitals are nearing crisis capacity levels, and is urging the state to emphasize boosting its ailing economy.

Here’s a theory. It’s one we happen to share.

This whole situation enough to make one wonder if these clowns are so damned committed to destroying a 75-million-member political movement that they’re ok with throwing a boatload of the ‘little people’ under the bus to make sure it sticks.

But Heaven help us all if someone threatens to shut down the government for even a New York minute, amiright? It’s the end of the freaking world.

He thinks he’s a tough guy and a leader of men… but he’s a chump who hasn’t a clue what leadership and toughness really look like. Speaking of tough leadership…