When the left celebrated the idea of starting a civil war, and forcing their ideology down the nation’s throat with — or without — the help of red-state voters, THIS is what they always meant.

Their plan was ALWAYS going to be to leverage their natural advantages in wealth, communication, tech and political connections to neutralize our ability to counter-strike. The aggressive and systematic consolidation of their political power has already begun.

Part of that consolidation, as it is with ANY authoritarian movement in history, is to neuter and suppress the ability to fight back against raw displays of jackboot authority.

You guessed it — they’ve turned their attention to legal gun owners.

AR15.com, the biggest gun forum in the world, was deplatformed on Monday by web hosting company GoDaddy. —TheFederalist 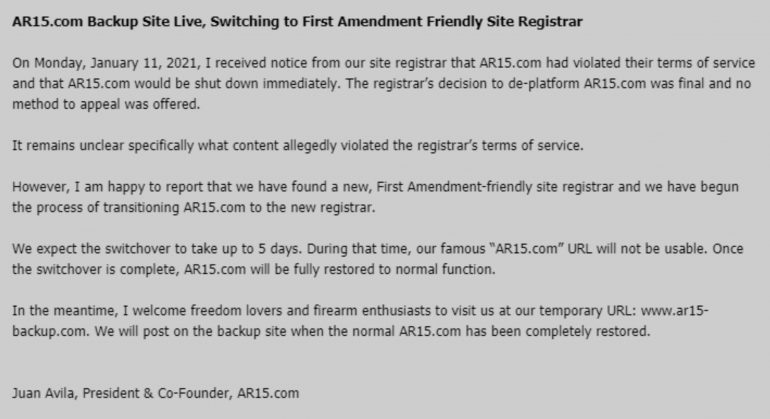 Their backup site is live. When we went there, we couldn’t help but notice this:

None of this should surprise us. After all…

“I want to make something clear, I’m going to guarantee you this is not the last you’ve seen of him,” Biden said Monday evening during a campaign rally in Dallas. “You’re going to take care of the gun problem with me. You’re going to be the one who leads this effort.” —NewYorkPost

We can expect a lot more where this came from.

Credit card companies, for example, will be pressured not to facilitate private gun purchases.

The left already slapped the NRA with significant lawsuits during the last election cycle to tie up the money they would have donated to Republican causes. Commercial real estate will be pressured not to renew leases with businesses selling guns… and so on.

We’re going to have to get some steel in our spines for the contest ahead. It’s going to be a long, hard fight, and those who hate us are not going to go away quietly.

The ladies won’t be sitting this one out either. After all, in situations even more critical than this one, they have often stepped up and made all the difference.