Usually, the questions carefully ignored and avoided by the partisan media types are far more interesting and important than the ones they ask. Like the one they carefully ignored in all their ‘Russia Collusion’ frothing against Trump.

That obvious question is — what was the real reason you opened an investigation into a candidate for President of the United States?

We’ve heard all of the spin-doctoring that CNN ‘experts’ and duplicitous drones like Adam Schiff burp up at us. But what do the participants themselves say began it all? After all, there’s supposed to be a PREDICATE for any case that’s opened. What was it?

The spy responsible for the Dossier itself is on record with is own partisan motives. No WONDER an FBI staffer wanted these documents to go through a vetting process. Related: Top Brass Spiked Review Of Steele Dossier’s Credibility… Here’s Their Excuse

Dossier author Christopher Steele admitted to the FBI that he leaked the Russia collusion story during the height of the 2016 election to help Hillary Clinton overcome her lingering email scandal and because he believed Donald Trump’s election would be bad for U.S. relations with his home country of Britain, according to documents declassified by the president in his final full day in office.

The FBI report of an interview agents conducted with Steele in September 2017, nearly a year after he had been terminated as an informant, provided explosive information about his motives in working simultaneously for the FBI and the opposition research firm for Clinton’s campaign. The document was obtained by Just the News and at times reads like a confession from the now-infamous former MI6 agent and author of the anti-Trump dossier. –JustTheNews

Steele was working two angles at the same time. On one hand, he was cooperating with the FBI, on the other, he was busy muck-raking for team Hillary. When push came to shove, he prioritized his work with Hillary over the FBI. When questions about her emails resurfaced, Steele knew she was in trouble, and took action… leaking the Russia story to the press.

Notice the name of the supposed patriot whose name shows up as a willing patsy in the very earliest stages of this plot to damage and destroy our system of democracy and due process.

As for the ‘foreign interference’ that Hillary keeps talking about? Here’s some now:

Steele and his partner Christopher Burrows even suggested the FBI deserved some of the blame for the decision to leak to the news media and Sen. John McCain’s office.

“STEELE and BURROWS described the overall situation as being one where it was ‘your [FBI] fault’ and ‘our fault,'” the memo reported, adding that Burrows was also upset the FBI had not paid Steele for his anti-Trump work.

The two British citizens told the FBI that concerns about the impact of a Trump presidency also motivated them.

“STEELE and BURROWS described President TRUMP as their ‘main opponent’ and indicated that they were fearful about how Trump’s presidency negatively impacted the historical US-US alliance and the US-UK special relationship,” the memo stated. –JustTheNews

This interview was buried, but it was also conducted in 2017. There is NO (honest) reason for the Mueller investigation to have dragged on for as long as it did when we know the very predicate of it was complete bulls**t.

Where did Steele get that sketchy Russian sub-source he was citing — the one who actually disavowed much of the information he was alleged to have provided? You’ll recognize her name. 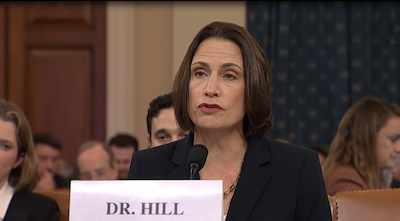 Impeachment witness in the first go-round?

Trump kept using the word ‘witch-hunt’ to describe the attacks on his Presidency. It really does look like he was onto something.

And this is just ONE of the many documents that Trump just declassified. We look forward to seeing the rest.

John Solomon believes Durham’s silence thus far is due to him carefully building a criminal case against those responsible. While we would certainly hope this is the case, we’re not holding our breath.

We also look forward to all those apologies from the great defenders of that ‘patriot’ McCain. They’re in the mail, surely.

And for any of you who held up Hillary of Fiona Hill as great examples of female leaders? You can do far better. Start here: