Ted Nugent doesn’t mince words ever. This viral “Open Letter” to Joe Biden is no different.

President* Joe Biden continues to call for “unity” from one side of his mouth while Democrats, the D.C. Swamp, the Media (D), and the Big Tech continue to hound Donald John Trump and his supporters.

A Facebook post on the topic of Biden’s call for “unity” shared by outspoken rightwinger, Ted Nugent, back on November 18 suddenly went viral on Monday.

When this post first started gaining traction, it was attributed to the Motor City Madman. According to a  Reuter’s fact-check, Linda Peterson, a spokesperson for the Nuge, said that he had shared the letter but is not the author. Still, it’s some mighty good stuff.

Here is a photo of the viral post with the text following. 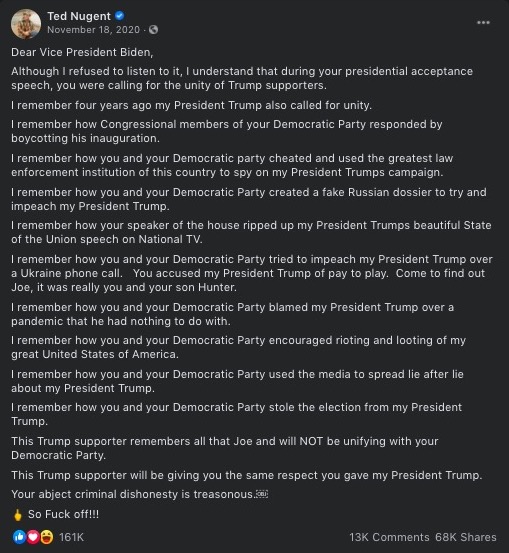 But that’s not all. He posted some interesting stuff more recently. 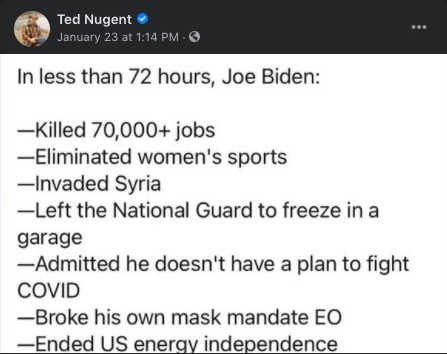 Off to quite the start, eh?

This was posted with several memes: 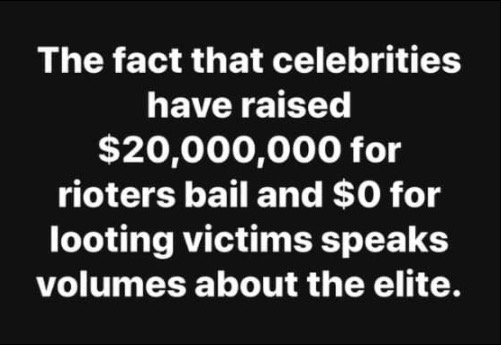 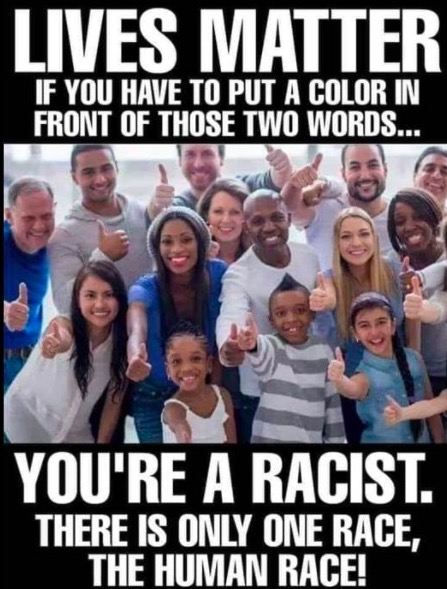 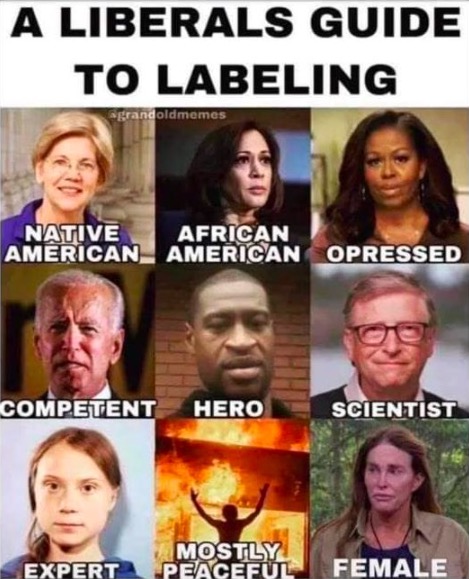 Hilarious and yet… true.

Uncle Ted also posted this one today and was promptly “fact-checked” by the social media Arbiters of Truth. 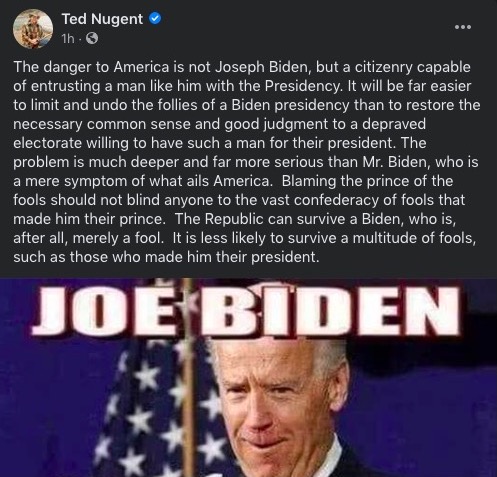 Here is the copy:

The danger to America is not Joseph Biden, but a citizenry capable of entrusting a man like him with the Presidency. It will be far easier to limit and undo the follies of a Biden presidency than to restore the necessary common sense and good judgment to a depraved electorate willing to have such a man for their president. The problem is much deeper and far more serious than Mr. Biden, who is a mere symptom of what ails America. Blaming the prince of the fools should not blind anyone to the vast confederacy of fools that made him their prince. The Republic can survive a Biden, who is, after all, merely a fool. It is less likely to survive a multitude of fools, such as those who made him their president.

And here are the memes that accompany it: 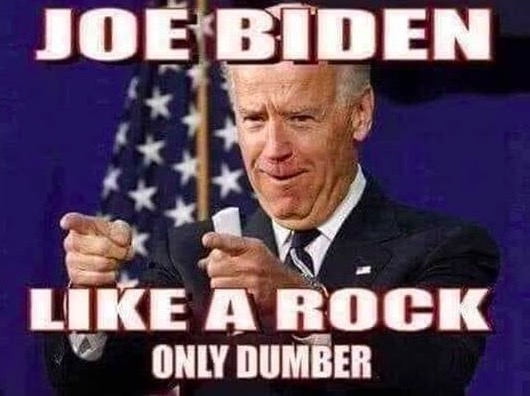 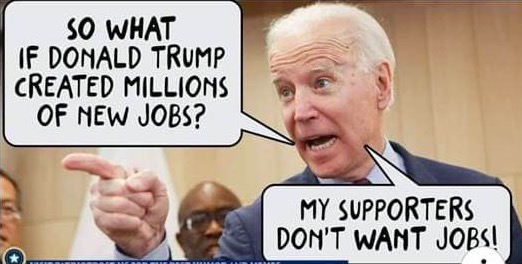 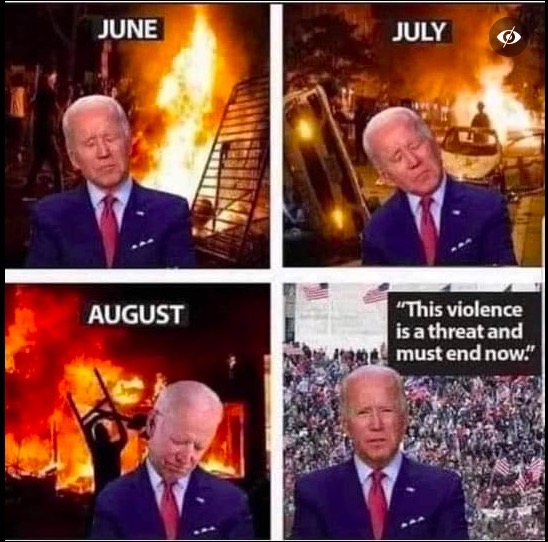 Facebook has determined that this opinion is false information, so they’ve flagged the wrongthink.

Well, Joe was silent on the BLM riots but loudly condemned the Jan. 6 rioters.

Weren’t we told all summer that riots are a way for those who have been silenced to “have their voices heard”? I guess there’s a political compass test that you have to take first to determine if it’s a “mostly peaceful” demonstration or an insurrection.

As for the rest, Democrats do seem very happy with lockdowns, and Joe Biden really is dumber than a rock. Still, it was fact-checked. 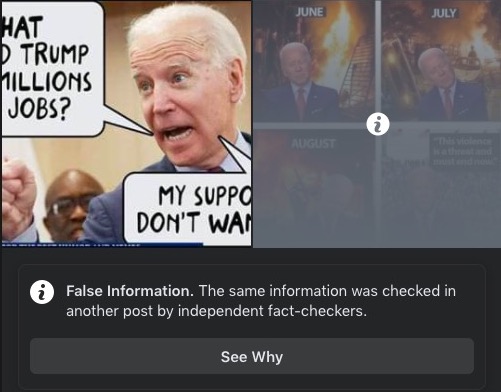 Here is the justification: 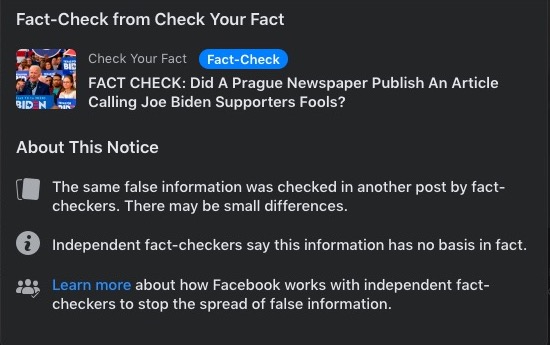