When the servile praise of elected Democrats gets so bad that even other news sites are calling it out, it’s time to admit you have a problem.

Even Politico’s deputy managing editor acknowledged this problem in a piece summarizing some of the events worth noting in his newsletter by citing the following quote:

“The commentary from TV broadcasters across the board, all day long, was at times embarrassingly complimentary,” she added, a point echoed by our own Jack Shafer. “Maybe that’s fine for a day or two while everyone takes a few sighs of relief that democracy has survived its stress test. But soon, I’d guess, another norm will return: the desire to appear combative and to blow things out of proportion to demonstrate toughness.”

Embarrassingly complimentary? That’s a fine example of litotes there, Mike. Some of the imagery invoked in praising him veered well into the realm of the religious.

Why does the public call them dismissive epithets like PartisanPress, the Media(D), and FakeNews?

In the opening of the 2019 piece, Harris described her grueling schedule on the campaign trail — and the respite she got from SoulCycle sessions and walks on the beach with her husband.

“It’s a treat that a prisoner gets when they ask for, ‘A morsel of food please,’” Harris told Washington Post reporter Ben Terris, who described the then-presidential candidate as “shoving her hands forward as if clutching a metal plate, her voice now trembling like an old British man locked in a Dickensian jail cell.”

“‘And water! I just want wahtahhh….’” Harris continued. “Your standards really go out the f—ing window.”

The link to the original story rerouted to the newer version published this month — a nearly identical version without the unflattering Harris prison anecdote. — NYPost

Remember, their slogan is ‘Democracy Dies In Darkness’ and they themselves have provided that darkness with examples like that one, and their refusal to discuss stories damaging to Joe Biden, including a former business partner alleging corrupt dealings with foreign powers, corroborated by evidence turned up by the Hunter Laptop scandal.

These are the same people who tried to blow up an unconfirmed rumor that Trump once said ‘sh–hole country in a meeting’ into some kind of an international scandal.

Is it any wonder that Axios is reporting that trust in the media is at an all-time low? Here’s a screenshot of what they’re saying: 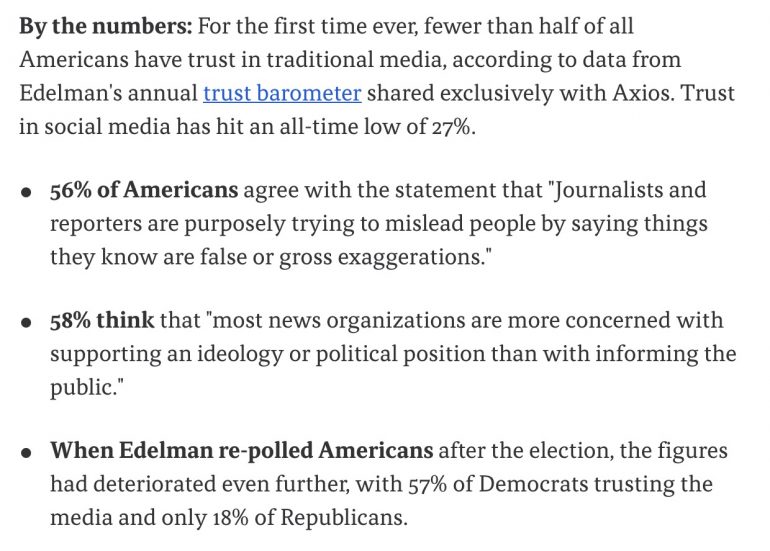 And while chuckleheads like Acosta will point a finger of blame at Trump and the right, these money quotes tell a different story.

The big picture: These numbers are echoed across the rest of the world: They’re mostly not a function of Donald Trump’s war on “fake news”.
[…]
The catch: Mistrust of media is now a central part of many Americans’ personal identity — an article of faith that they weren’t argued into and can’t be argued out of. —Axios

The ‘legacy’ media will need to choose between burying reports damaging to Democrat ambitions and being a respected news source.

It shouldn’t need explaining that their commodity isn’t information, it’s trust. And when you’ve lost that, your entire business model is living on borrowed time.