These are beginning to be dangerous times for people who don’t adhere to the leftist narrative.

The problem is that the people creating those dangerous times are:

And they’re doing that all at the same time.

It’s time to take a good, hard look at the facts and that’s precisely what Chad Felix Greene, a right-wing author and senior contributor at The Federalist just did.

He laid it all bare. Here is what the left believes… 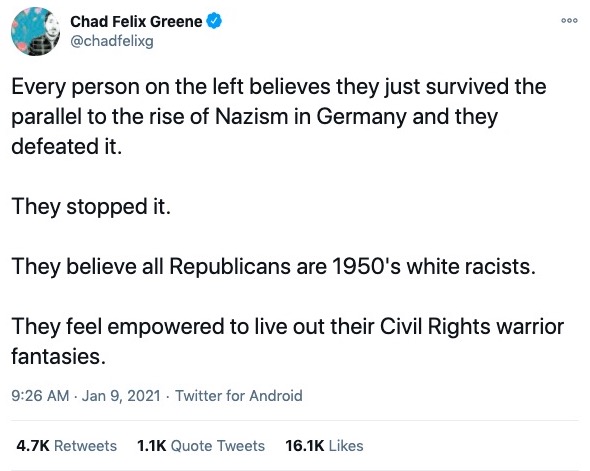 We don’t live in a divisive, oppressive society… but that’s not good for the activists.

They need an “evil” to fight against.

That would appear to be anyone that is to the right of Karl Marx, who despite the sainthood bestowed on him by the left, was a pretty horrible excuse for a human being.

This isn’t just about lower taxes versus “free” college tuition, this is about good versus evil. 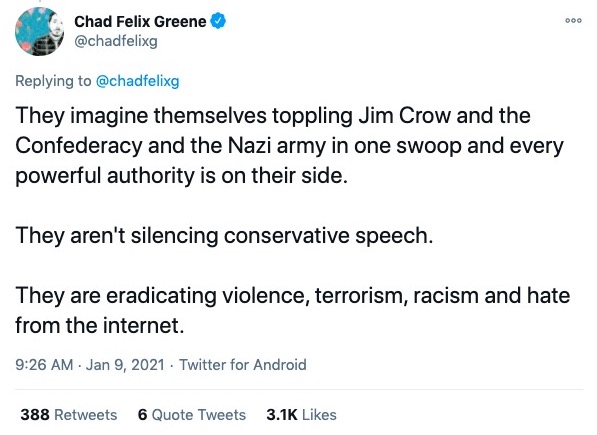 They see silencing conservatives as a win because we have come to a place in our polarized society where they think we all have Klan hoods in our closet. (Even though that was a Democrat thing, but then, they’re apparently historically illiterate or just not that bright.) 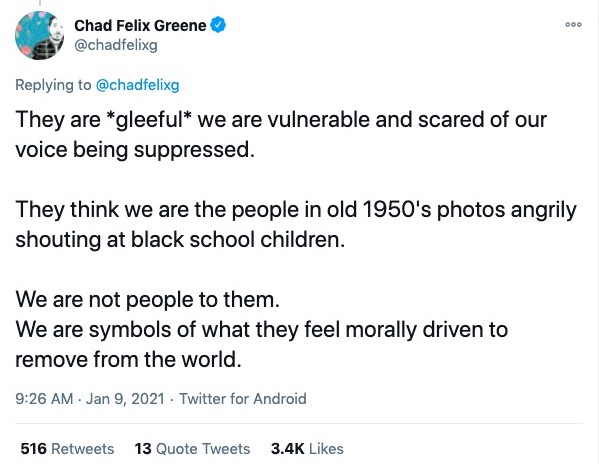 We see how they handle symbols that they don’t like. They destroy them.

How much statue-toppling do you need to see before you realize that it could get very, very bad for rightwingers? 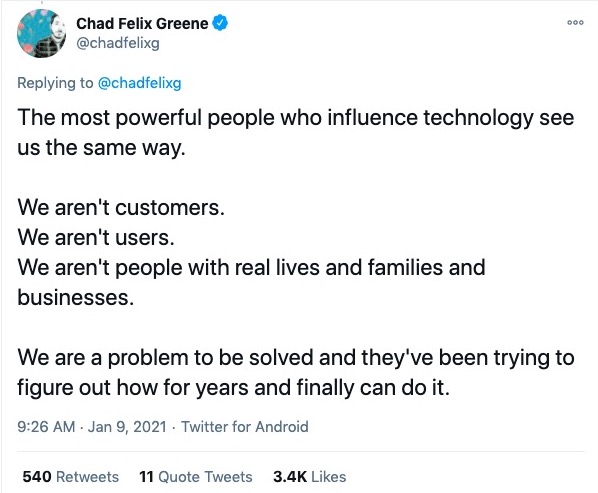 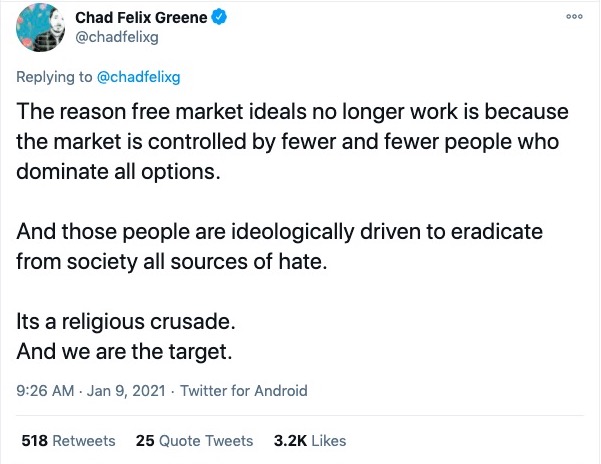 Bingo. They are doing de-platforming rightwingers because they can and are applauded for doing it. 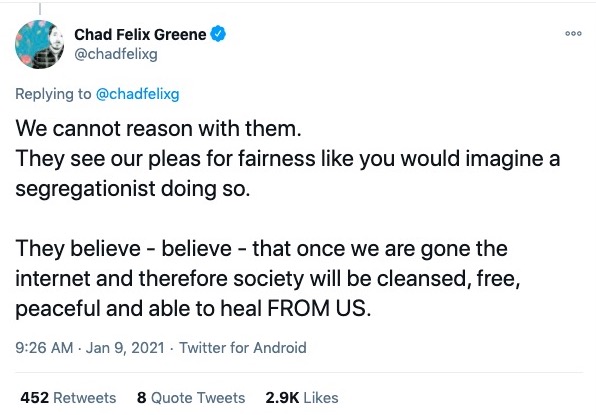 Harsh, but think about how people react to celebrities who identify as Republican or Libertarian. There’s an immediate call for boycotts and cancellation.

Now it’s not reserved to celebrities. 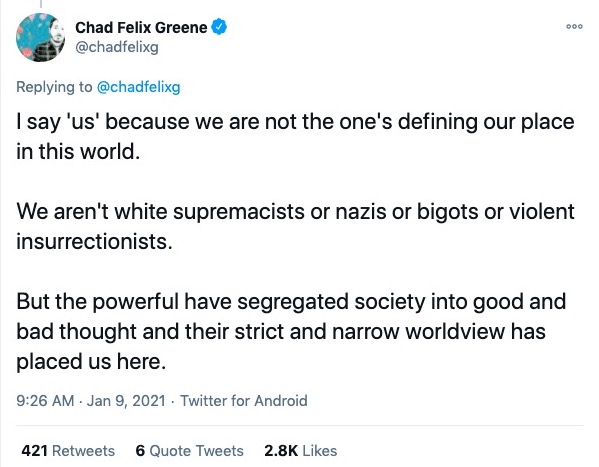 We cede too much ground and allow the other side to dictate the rules to us, define us, and then hold two different standards. Enough! 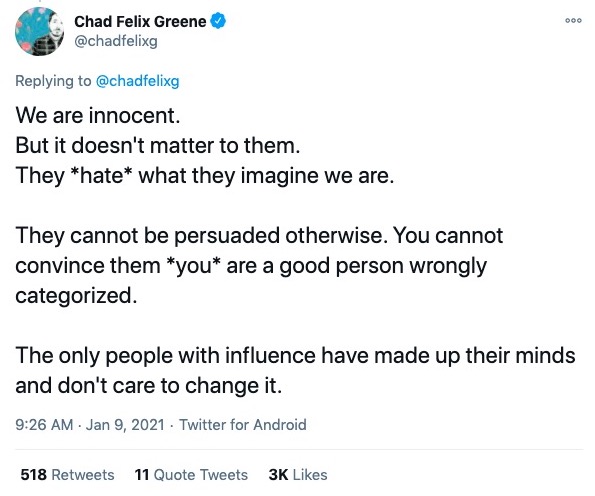 Left-wingers are in an open war to eradicate the “virus” of right-wing thought, but they have no real idea of what that is. They imagine what it is and then fight strawmen. There is no opportunity for compromise or nuance. You’re evil to them. 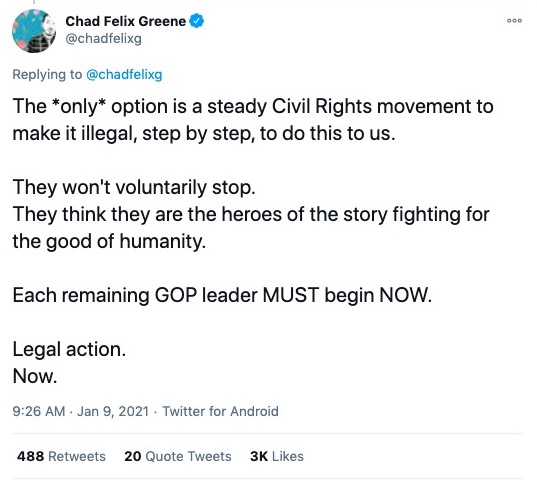 They’re going to laugh, but this canceling of right-wingers is becoming akin to a grassroots version of Jim Crow.

The editor of Forbes has issued a warning that any company that hires a White House Press Secretary that worked for Trump will be assumed to be dishonest. Meanwhile, Ben Rhodes, Iran Deal architect, who laughed at the gullibility of the media under the Obama Admin is now a podcaster and foreign policy analyst on NBC News. 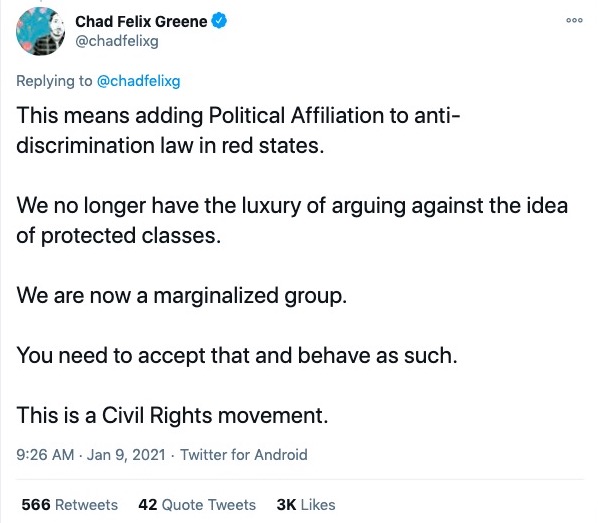 It’s pretty extreme, but CNN has been doxing people for memes that they shared. 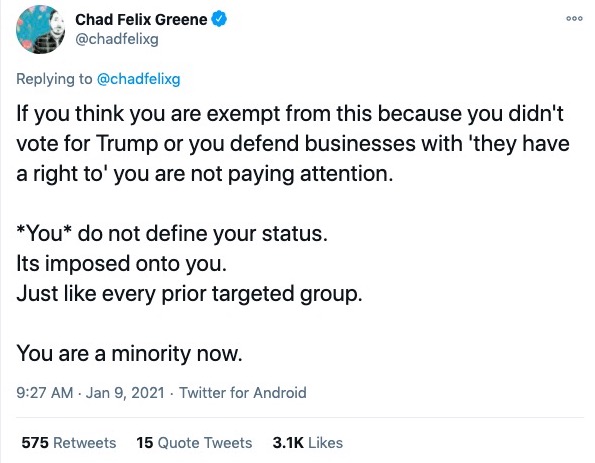 The ACLU began as a group designed to fight for the rights of the marginalized. They have suffered serious ‘mission drift’ and have abandoned that cause. We will need to take up or own cause. 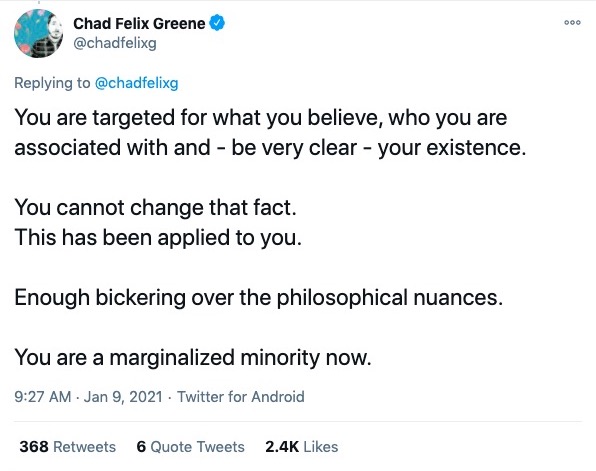 They think that by marginalizing their ‘oppressors’ they are righting past wrongs. They cannot see how it is possible they are entrenching new ones. 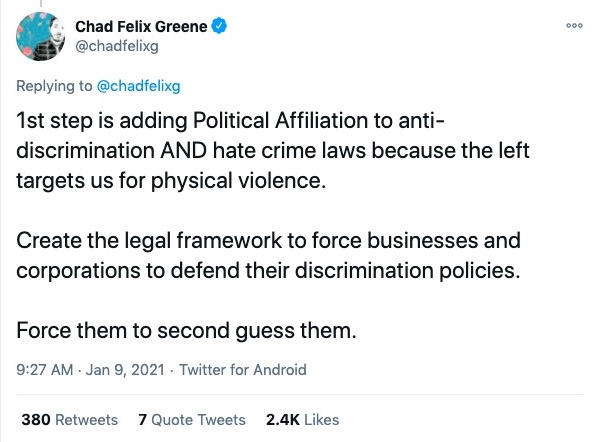 Also, having some powerful states on our side is an advantage in this fight. 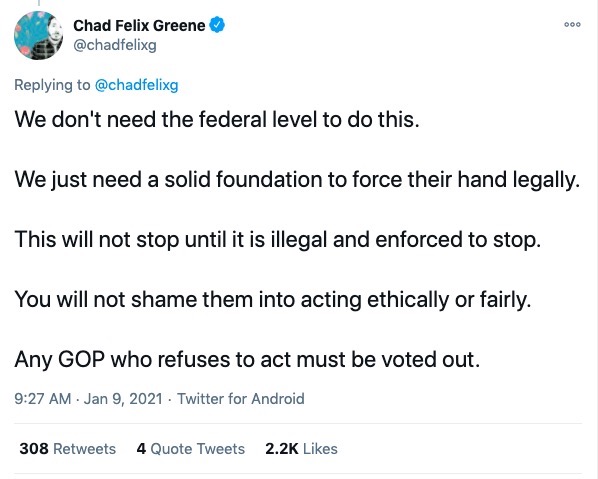 Time to clean house and get as serious about this process as those who wish our destruction have been.

His solution to Tech Tyranny?

The internet needs a ‘bill of rights’. 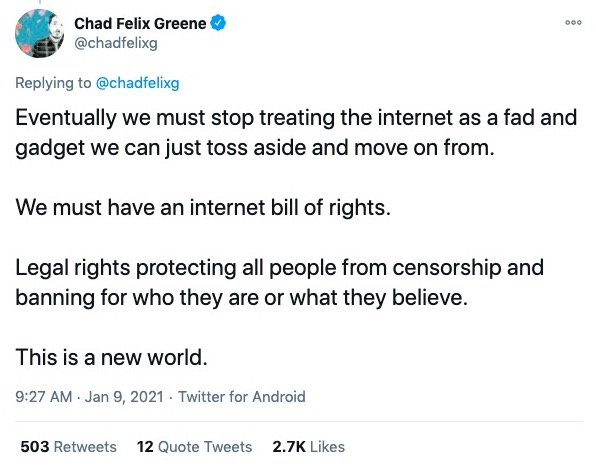 Timid solutions won’t cut it in this bare-knuckle world we find ourselves in. 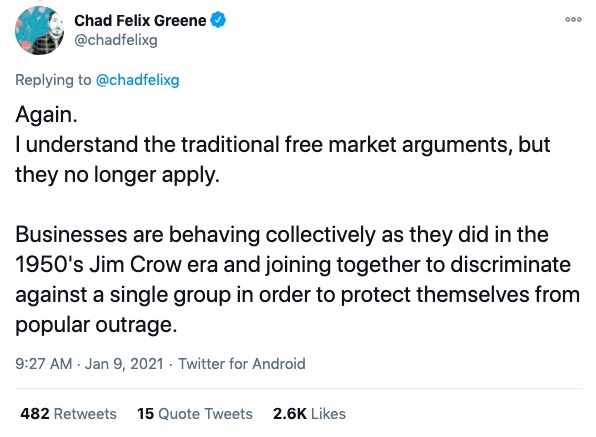 Communities and networks will matter. They can pick us off one at a time. As a group, it’s much harder. 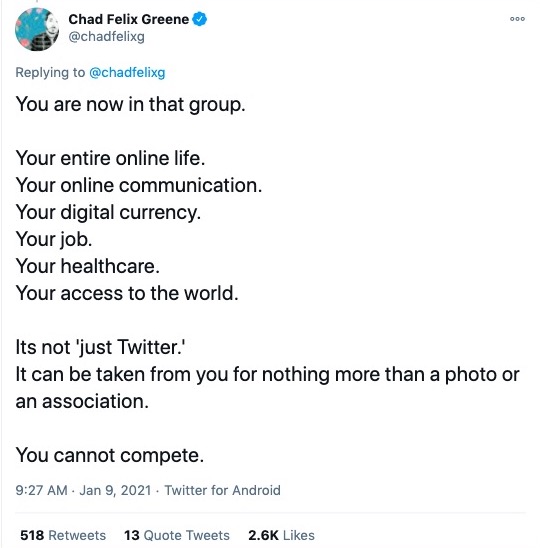 We are already seeing banking becoming political, and have seen businesses denied support from Credit Cards. How much longer before they look to choke out their political enemies this way too? 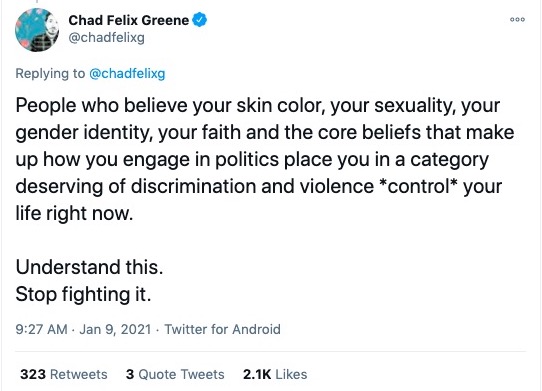 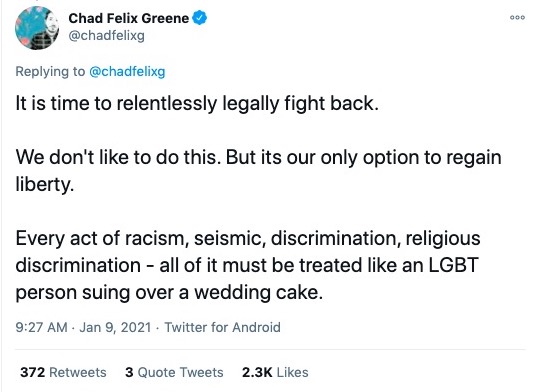 With the Left, NO fight is too small, too insignificant, too petty to go to the mat for.

Their side does not give an inch… and they have been capturing both institutions and the public imagination. 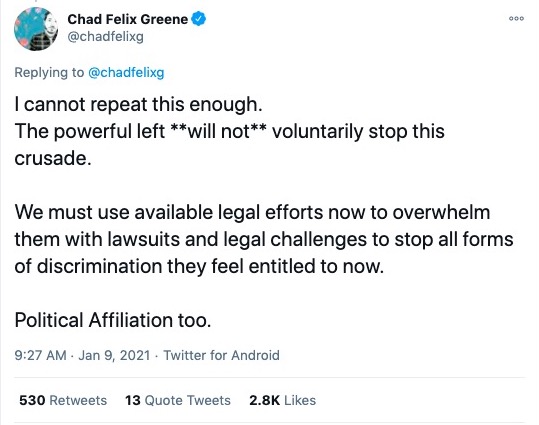 When Trump said they weren’t attacking HIM, they were using HIM as a way of attacking US, he REALLY wasn’t kidding.

Consider: they did NOT hate Trump until he associated himself with us. 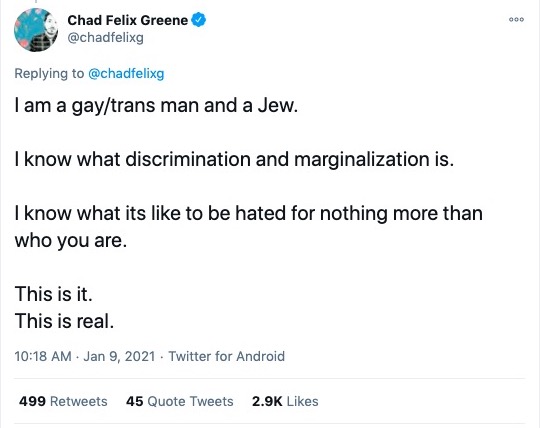 You can read the entire thread on Twitter here.

And it’s been unrolled by the Thread Reader App here.

So, what’s the solution?

For one thing, we’ve got to stand up and be counted.

How does one get the moxy to BE that kind of person when you’ve been more or less interested in going about your business and living a quiet life?

Start by reading about great people who stepped up when it was THEIR time to stand and be counted.