Almost four years ago to the day, one website from the left first unleashed what was to become an attempt to reverse the 2016 election. This same site now wants to lecture us about ‘disinformation’.

Among many reports swirling around after the storming of the Capitol building, was one facial recognition company claiming that at least some of the people breeching the building are not who we’re told they are.

It’s the same news reporting that Matt Gaetz made reference to in his speech to Congress later that same day.

It didn’t take long for fact-checkers on the left to denounce that reporting. After all, their track record shows us that any albatross they can hang around Trump’s neck is a win in their book.

A facial recognition company says a viral Washington Times story claiming it identified antifa members among the mob that stormed the Capitol on Wednesday is completely false.

XRVision told BuzzFeed News it asked the conservative news outlet for a retraction and apology over the story, which was cited in the House of Representatives after the riot late Wednesday by Florida Republican Rep. Matt Gaetz, an ardent Trump supporter. –Buzzfeed

Buzzfeed. Remember them? They’re the guys who still haven’t retracted the Steel Dossier they published that started the hair-on-fire Trump-Is-Russia’s-Puppet narrative… a narrative Joe Biden was happy to invoke even in the debates, long after the claims had been investigated and shot down. Then again, slander is one of the few languages Biden speaks fluently, isn’t it?

For anyone new to their games, this is a standard tactic of the left. Find some detail of the story, cast doubt on it, and claim the whole thing is a lie.

It may or may not be true that XRVision contested that story, you have to wade through a lot of crap in Buzzfeed to get to any truth, that wasn’t the goal here. They didn’t care about whether that one guy was or wasn’t who they said he was. That’s not the big picture here.

They want to congratulate themselves for NOT being part of the events at the Capitol on the 6th. Leftist activists are a lot of things, but we’ve NEVER done this thing that YOU did.

When you know the narrative you are cooking up, you can compare known facts with it and know if their MAIN story is true. Buzzfeed’s narrative attempt is so obvious that all it would take is a single counterfactual example to shoot it down.

They were explicitly refuting connections to ‘Stalinists’, ‘BLM’, or ‘Antifa’.

With that starting point as our benchmark, we can fact-check the fact-checkers. Is Buzzfeed correcting the narrative, or just spinning it to blame the right scapegoats? 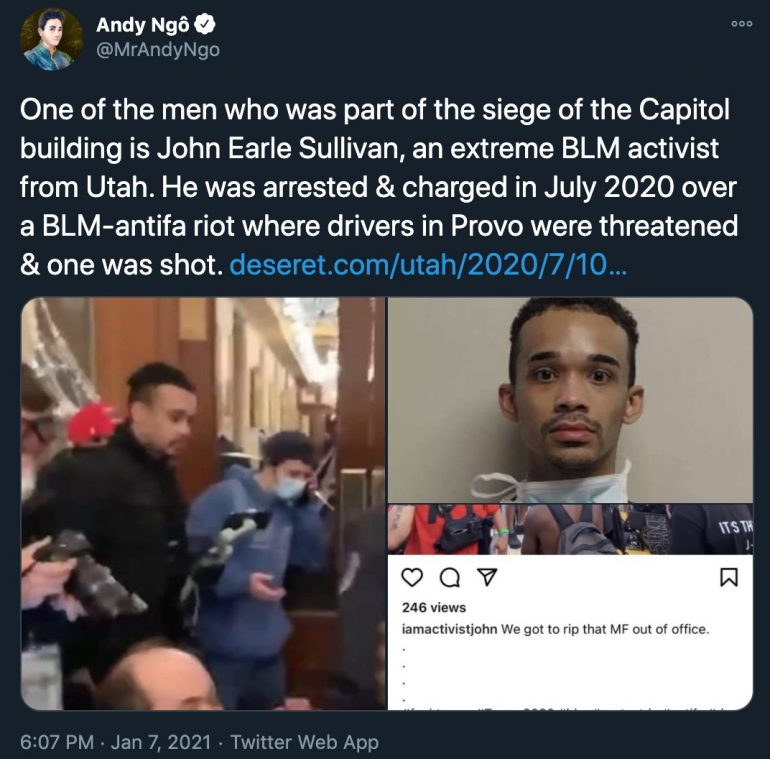 Here is John Earle Sullivan speaking at BLM Plaza in DC in August.

John Earle Sullivan, who was inside the Capitol building during the siege on Wednesday, previously gave a speech in BLM Plaza in DC in August 2020 where he identifies as being part of an insurgency group & calls for a violent left-wing revolution. pic.twitter.com/6XeaTHmPlh

Thank you Andy Ngo. This is what reporting used to look like, before everything got politized.

Sullivan is part of the Insurgence USA group, according to a police affidavit.

“Protesters traveled through downtown Provo. The protesters did not obtain a permit for the event,” the affidavit states. “John Sullivan and Insurgence USA had social media postings promoting other protesters to join them.”

Between 80 and 100 people were part of the protest.

“The protest traveled on the roadways blocking motorists who have the right of way. John Sullivan blocked vehicles from freely moving lawfully. During the course of the protest, two handguns were brandished and two shots fired toward a motorist traveling to Home Depot. Vehicles were damaged by protestors as well as by John Sullivan,” the affidavit states. –DeseretNews

Buzzfeed is the functional equivalent of a virus in the body politick… and should be met with a commensurate level of contempt.