Welcome to the new era of peace and reconciliation, where the very first thing Democrats who have slandered Trump for 4 years do after they regain power is to wage war against the outgoing President.

They don’t want to beat him, they want to destroy him, destroy the MAGA ideas, and terrify anyone foolish enough to take up the MAGA mantle in his place. He has become the personal embodiment of the 75 Million ‘bitter clingers’, ‘deplorables’, or ‘chumps’ that gave Trump a larger mandate than any American president who has ever yet held office.

How the guy who was getting his ass kicked by Bernie Sanders in the primaries until the field narrowed just in time to give Biden an edge on Super Tuesday had a greater vote tally than the new high water mark set by Trump is still the subject of no small dispute.

It’s not enough that they have outmaneuvered Trump… the left need to humiliate him and leave his supporters discouraged and in disarray, fearful of the consequences of standing up to the left’s vicious machine of personal destruction.

That’s what the Impeachment is intended to accomplish.

It’s a rush to judgment. The Democrats have a majority, so their ‘findings’ are already known long before the first witness is called. And, of course, Trump will have no opportunity to call witnesses in his own defense — just like he didn’t last time.

A Trump scalp will be the coronation gift they plan to give their conquering hero, Joe Biden as he takes office.

But be warned. Playing this tactic could come at a terrible price, and boomerang badly on the Democrats. We explain why below the screenshots of the impeachment charge.

Here is the relevant text of the order: 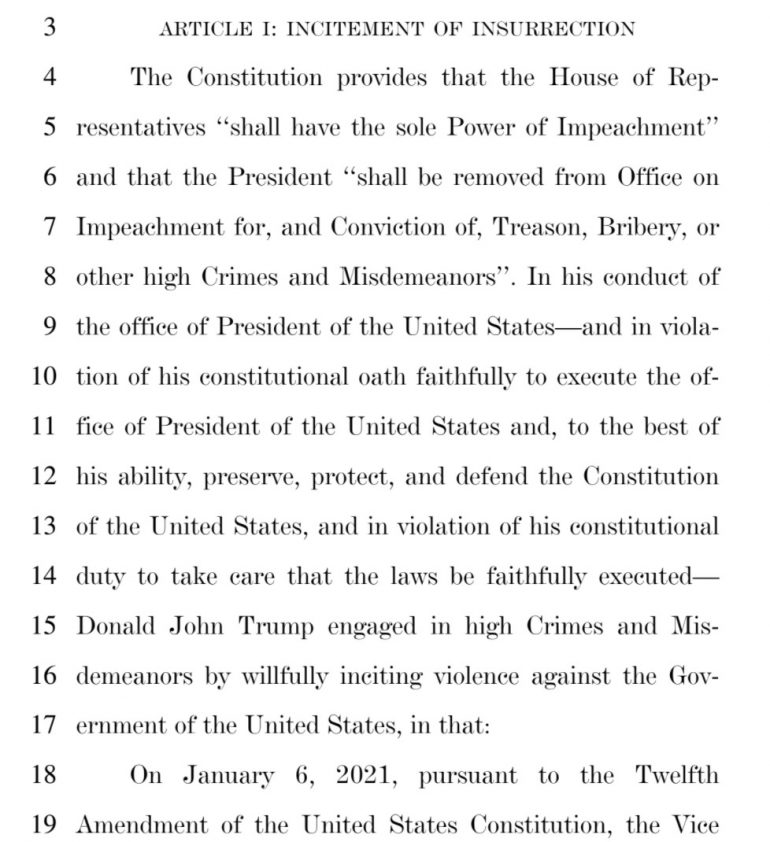 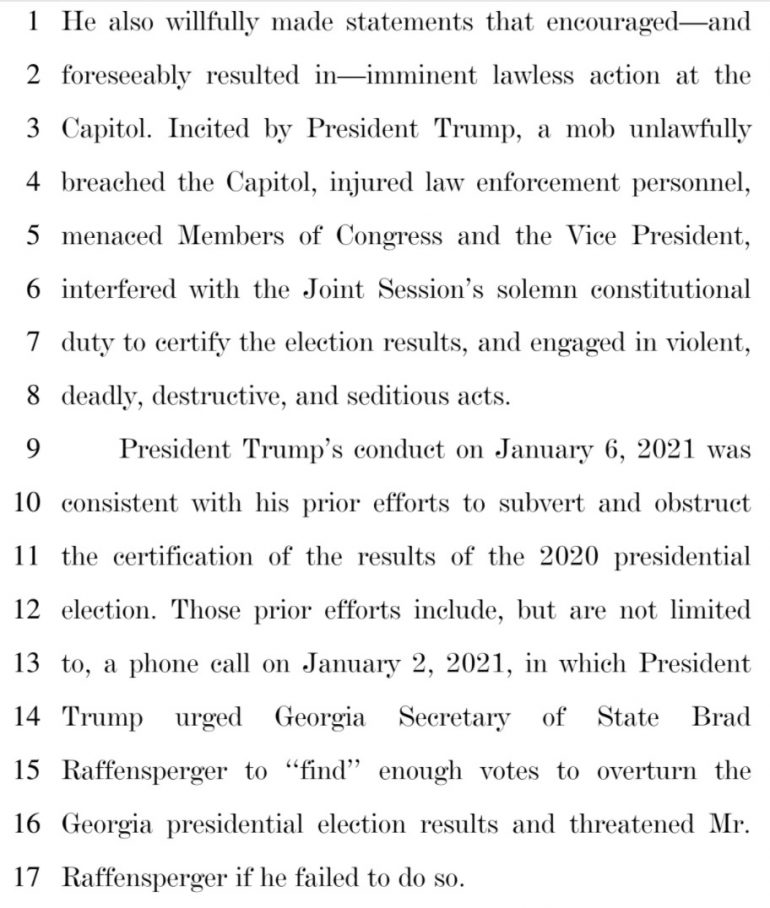 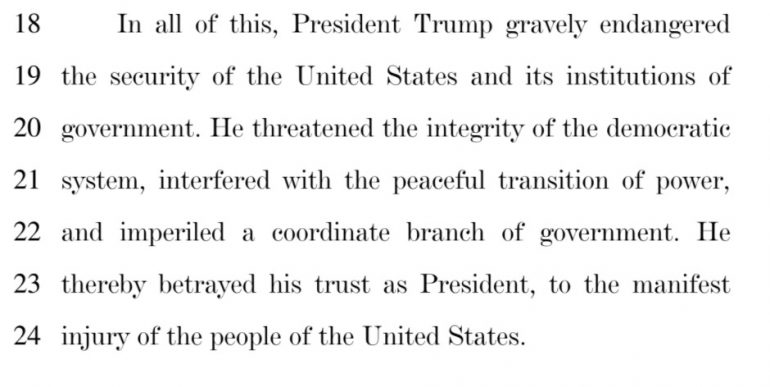 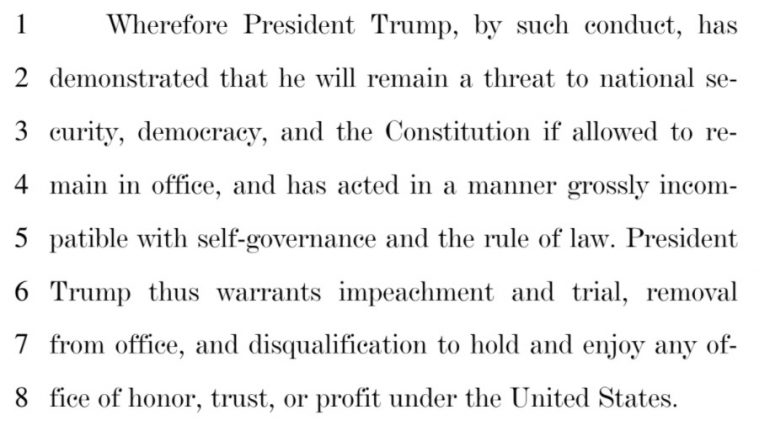 This isn’t just a bold move, it’s a dangerous one.

Schiff, Nadler, Pelosi, and company have already shown that they aren’t interested in operating under any rules of courtroom law. Republicans did NOT get to call any witnesses last time. Anyone they did call for testimony had to be from a Democrat-approved list.

The hearings in the SCIF — which not even the whole Congress could attend — were conducted in secret. Their dishonesty was underscored by the fact that testimony that would have helped exonerate the President was never released to the Republicans as they were obligated to do, yet Schiff’s team routinely leaked damning whispers absent any context to the media with their bated breath. This isn’t even addressing the problem about witnesses they brought against the President’s first impeachment whose testimony — under oath — was shown to be in direct conflict with known facts.

What’s the problem with this impeachment plan?

1) There WAS no incitement to violence. Trump actually offered the help of the National Guard to help keep the protests peaceful. He encouraged his supporters to march peacefully several times during his address. And no point did he meet anything resembling a minimum criterion for criminal incitement. Similarly, the hour-long phone call gives exonerating context that this accusation leaves out.

2) Pelosi has personally communicated with the military leaders about preventing Trump from acting on his Article Two powers as Commander-In-Chief. She was encouraging top military brass to obey HER instructions rather than those of the lawfully-elected President. There is no legal precedent nor authority under which any Article One elected official can direct the military to do anything. She was, strictly speaking, assuming Presidential authority for herself. That’s a very dangerous precedent to set. If a Republican did it, you would charge him with treason, and you would be right to do so. Consider those implications before proceeding… because that WILL come up in the trial.

3) Pelosi and many others in her party have not merely refused to denounce political violence, but police officials whose only ‘sin’ was defending federal buildings from rioters were demeaned by top-ranking Democrats with slurs intended to equate them with the Nazi brownshirts. This includes the officials defending the White House itself last June, and those valiantly defending a Federal Courthouse in Portland that rioters spent months trying to target for destruction.

4) Hundreds of police were assaulted, wounded, maimed, and even killed by violence that you didn’t merely dismiss as ‘peaceful protesters’, but worse, Democrats — including the incoming Vice President — gave ‘aid and comfort’ to them by organizing and fundraising for their bail, releasing repeat criminals back onto the street where they continued to attack others. Trump supporters have been killed in cold blood, including one who was murdered in Seattle by someone who had been released from a previous arrest.

5) The Senate has already secured PLENTY of compelling evidence suggesting that Joe Biden is, in fact, a security risk who has used his office to enrich himself and his family at the expense of national interests including — and especially — national security. Biden WILL face an impeachment trial of his own, and his will be FAR more plausible. Obama-era abuses might even be included, and wouldn’t it be a damn shame if that were to expose the Light Bringer’s abuses of office in the process?

6) Finally, the second that final gavel pounds declaring the President ‘guilty’ (which we assume was always the plan as soon as you had a numerical advantage in the Senate), Republicans must call for similar impeachment proceeding against each and every prominent Democrat who has used language MORE aggressive than what Trump said, either in denying his win, or claiming Russians manipulated an election which even investigators say they did not change, or encouraging targetted conflict and harassment of politicians — which has included activists descending on Congress, intimidating and harassing elected officials in the Kamala-Harris orchestrated attack against a judicial nomination process.

Intimidation tactics have no place within the ‘sacred halls’ at the heart of our democratic process… and yet, Democrats encouraged — and orchestrated it… with the specific intention of intimidating Republican Senators to change how they would vote on the nomination of Brett Kavanaugh.

In fact, the clips and montages we have all seen — beginning with Mad Maxine Waters’ call to harass Republicans at gas stations etc. — should be played DURING the Impeachment hearings, as with Schiff and even Biden’s recent claims that Trump is Putin’s Puppet/puppy.

Trump claimed he had evidence supporting his elections claim, and wanted it heard by those in whom such authority rested. Schiff and company, on the other hand, just assured us that they had that evidence, even when they did not.

They are demanding a world in which there is no redemption for past sins… or for nonconformist thought.

Be careful what you wish for, once you open this door, there may be no closing it.