In case there was any doubt as to why Trump was so damned insistent on having the repeal of Section 230… even invoking ‘national security’ as a rationale, we’re getting a sneak preview of why that mattered.

With Democrats appearing to seize total control of the government, the left — including Zuckerberg who may have broken the law in putting elected officials in a conflict-of-interest by indirectly adding them to his partisan payroll, with strings attached — is free to attack Trump and the army of people that put him in office.

It isn’t even a question of motives. There are a wide variety of partisan reasons, which some enterprising student will someday write a research paper on. But in this election, even Stevie Wonder could have seen how Democrats, Big Tech, the press, and the entertainment complex had come into alignment to elevate one candidate and destroy the other.

A keen observer might notice who ISN’T on that list. The ordinary citizen. That’s because the citizen was merely the prize, or the pawn to be manipulated. The means to the end. We were warned that this was coming… and before anyone did anything to stop it, it came. TECH TYRANNY: Dr. Epstein Claims Google Shifted A MINIMUM Of 800,000 Votes To Dems In 2018 (VIDEO)

Now it’s up to rest of us to live with that outcome. But if you thought they would make it easy for us, or be gracious in their victory, you have been living in la-la land. 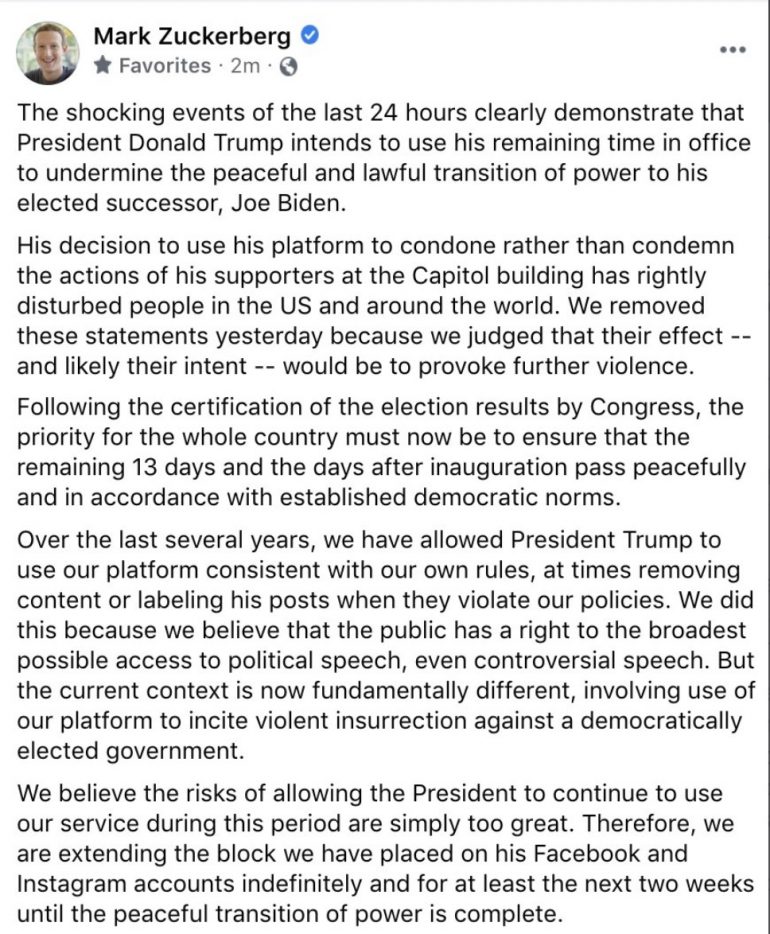 This was the plan all along. The events of this week just gave them the excuse they have been looking for to roll it out.

Snowden, probably no real fan of Trump himself, sees the obvious problem with this. 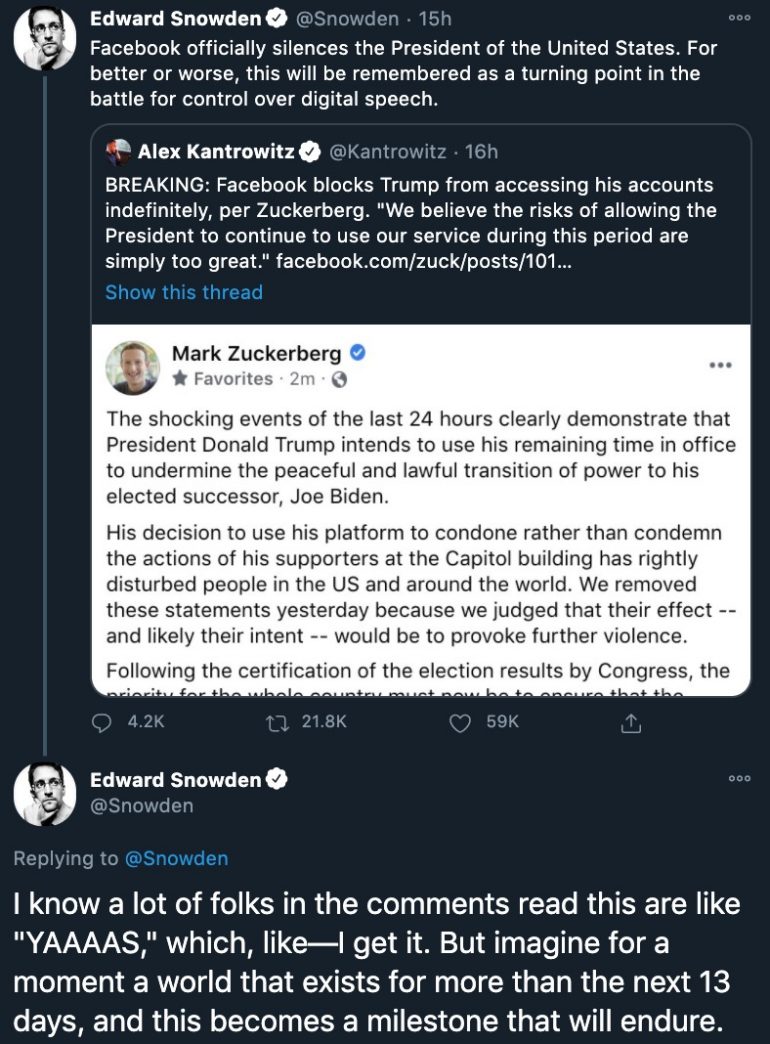 It’s not just Fakebook, either.

Do you think it’s going to stop there? Of course not. Other accounts have gone dark, too. One of them is Dan Bongino’s Twitter account.

Facebook appears to have deleted the pro-Trump WalkAway campaign that had 500k+ members. pic.twitter.com/J1CyAP31tt

Once the protections for being a world leader are gone, Twitter is itching to permanently suspend the @realDonaldTrump account. They’ve said as much.

Twitter statement this morning: "In line with our statement yesterday, any future violations of the Twitter Rules, including our Civic Integrity or Violent Threats policies, will result in permanent suspension of the @realDonaldTrump account"

One user made an interesting point. 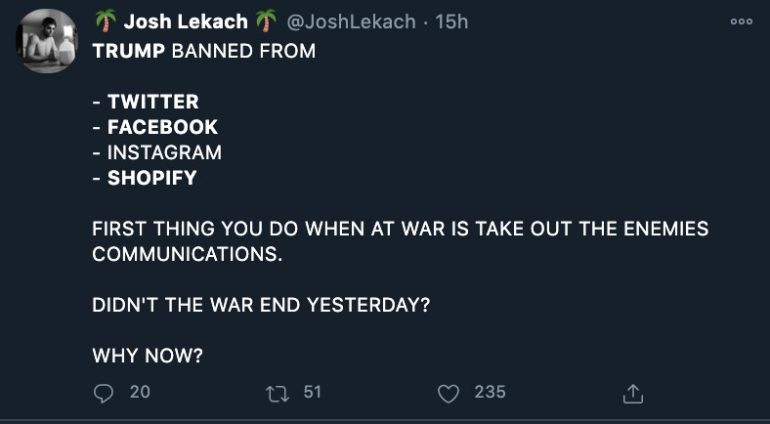 Patriots laughed when Silicon Valley types talked about a ‘civil war’ and remaking red states against their will the same way they did to California.

Patriots laughed mainly because they thought they an insurmountable advantage because of the Second Amendment. The left never intended to wage a bloody rebellion. They intended to fight with their home court advantage — an information war.

This isn’t just a ‘speech’ issue anymore. They have figured out a way to punish, ostracize, and otherwise blackball any company or individual who doesn’t comply with their wishes. This has gone WAY past just firing some CEO for a perfectly lawful political donation. You can now lose your livelihood for liking and following the ‘wrong’ political opinion.

Meanwhile, they keep claiming that TRUMP is the dangerous authoritarian.

Are we ready to take this fight seriously yet? Because it sure as hell is going to get harder before it gets easier.

You can expect they will come for all your favorite conservative sites, too — including ClashDaily.

This is where having multiple points of access becomes important. You can bookmark our page… Get on our mailing list… Click that ‘notification’ bell… open our emails at least once a month so you stay on our active list… and check us out on MeWe and Parler (scroll up to the top of this message).

If they are hellbent on cancel culture and punishing nonconformity to their game-plan, we’re going to need to build our own parallel economy — and fast. And we’ll want to starve the billionaire companies who want to see us crushed under their heels.

From 2018:
Leftists Want A ‘New Civil War’ – This Post Is Disturbing

If you’re going to stand up and make a difference in your generation, you should probably put some steel in your spine by looking at the lives of some who have done exactly that.