Joe is about to learn the same lesson that Trump did. Just because the previous president isn’t in office anymore, doesn’t mean he’s gone away. Joe himself handed Trump the very tool he’ll use to do it.

Part of Joe’s propaganda campaign to solidify his hold on the Presidency and make the election uncontestable was to establish himself in the mind of the public not as the guy who is leading or projected, but as the guy who had already been rightfully elected. This puts public pressure and a burden of proof on anyone who might challenge that assertion. (We covered that here drawing from an unlikely, but relevant, historical reference point: Smooth Transition Of Power? Here’s What Solomon Had To Say About It)

Twitter, which had put filters on almost every Trump tweet relating to the election in any way, did not put any such filters on Joe’s self-declared title of ‘President Elect’ even before his win had been certified by, well, anybody other than the media.

Then he started making public pronouncements from an ‘office’ that had no predicate or basis in history… ‘the office of the President-elect’. (How quickly Joe forgets his own attempt to apply the Logan Act against a decorated General on the basis that there is only one President at a time in America.)

But that opened up a great new opportunity for Trump to troll Joe! If there can be an ‘office of the President-Elect’… what stops someone from inventing another such office? Say…

The Office Of The Former President! 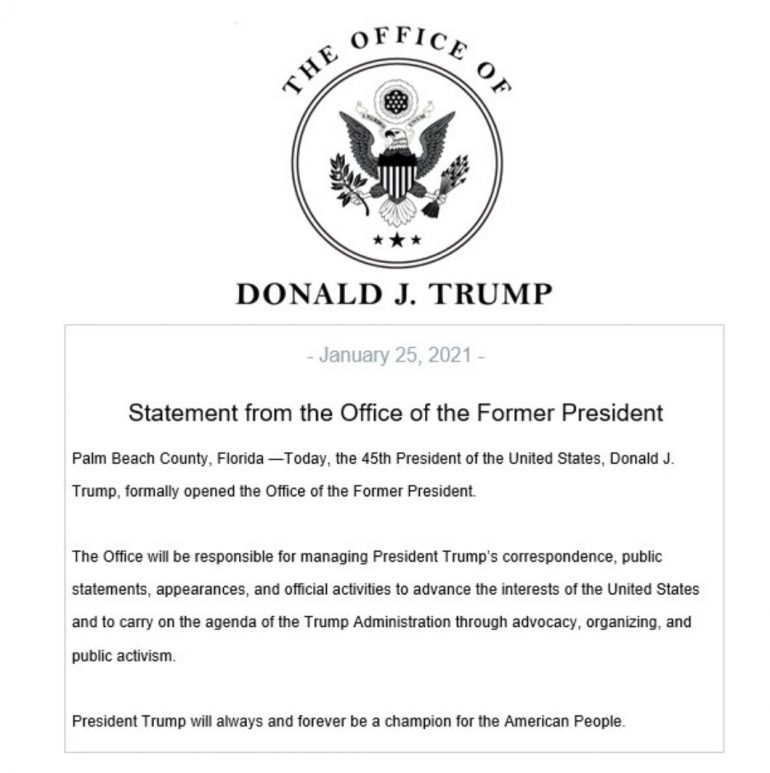 The Office of the Former President “will be responsible for managing President Trump’s correspondence, public statements, appearances, and official activities to advance the interests of the United States and to carry on the agenda of the Trump administration through advocacy, organizing, and public activism,” the statement said.

The brief statement added that Trump “will always and forever be a champion of the American people.” –WashingtonExaminer

Is the Transition to Harris Underway? Why No SOTU Address? Do We Not Have a President?
March 7th, 2021 Conservative Firing Line