Kamala has forgotten that she’s got a 50-50 Senate, and can’t afford to take anyone for granted. But power is like a drug for many people… with a high that’s tough to come down from.

She may be making the error of taking Democratic groupthink for granted. It’s served them well for 4 years, in standing opposed to many of Trump’s policies. But with no significant party mandate in their leads either in the Senate or the House, Harris is pulling the party hard to the left. And not everyone is interested in following where she’s leading.

And Kamala needlessly poked one of her own moderates with a sharp stick.

QUICK, someone tell us: What on earth was KAMALA HARRIS thinking?

The vice president’s move to troll Sen. JOE MANCHIN in his own state last week is backfiring — at a critical moment for President JOE BIDEN’S agenda.

This week, congressional Democrats are planning to take their first step toward passing the president’s $1.9 trillion pandemic relief bill without Republican help. But now they’ve got a problem: an unhappy Manchin — who, like it or not, has the power to grind this entire thing to a halt.

REWIND — here’s what happened: For days the moderate West Virginia Democrat has been imploring the White House to cut a deal with Republicans on coronavirus assistance. Stimulus checks shouldn’t be going to people making $300,000, he’s made clear, and the overall price tag should come down after Congress has already spent upward of $4 trillion. Democratic leaders, however, have balked at the notion of slowing down to negotiate and will put a budget on the floor this week to prepare reconciliation.

But here’s the thing: They need Manchin’s support to do it.

Enter Harris and what one of my Democratic sources called a “ham-handed” interview on local West Virginia television Thursday. It was clearly meant to up the pressure on Manchin to support Biden’s package, but it only antagonized him. “I couldn’t believe it,” Manchin said in a video that went viral Saturday. “No one called me [about it]. … We’re going to try to find a bipartisan pathway forward … but we need to work together. That’s not a way of working together, what was done.” –Politico 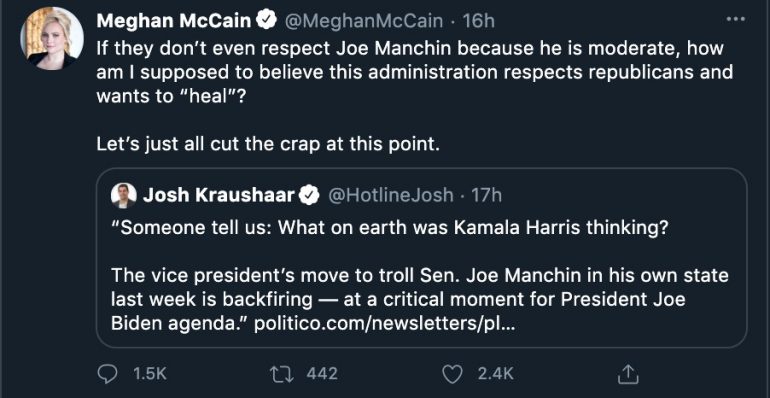 Just how far would she have to alienate him before he decides, like so many others before him, I didn’t leave the party, the party left me.

If she pokes the bear enough that he were to go independent and caucus with the Republicans, the dynamics of this game would change completely.

And Dems would have nothing to blame but their own hubris.

People keep holding up Kamala as some example of a strong independent woman. She’s power-hungry, not powerful. She literally traded sexual favors with a powerful man to climb the political ladder — that’s neither strong nor independent.

There are TEN far better examples of strong women in this little tornadic tome.

Young Not Stupid: My Grandfather's Legacy of Living the American Dream Deserves to Live On
June 21st, 2021 Flag And Cross

This Is What They Resort To When They Lose The Narrative: Polarize-Demonize-Force Compliance (Video)
June 21st, 2021 Sons of Liberty Media