It’s the kind of situation where you want to have complete confidence that your pilot knows what the hell he’s doing, and how he’s going to get you out of this mess.

And, if we’re honest, it’s the kind of situation where the pilot is wishing he’d worn his brown pants.

Shortly after taking off in Denver, this happened:

Notice how part of the engine was missing? They found it!

It’s right there in somebody’s front yard, having narrowly missed crashing through their roof.

That’ll wake you up faster than a cup of coffee, that’s for sure.

Shockingly, it wasn’t the only plane to have an engine blow up this weekend. 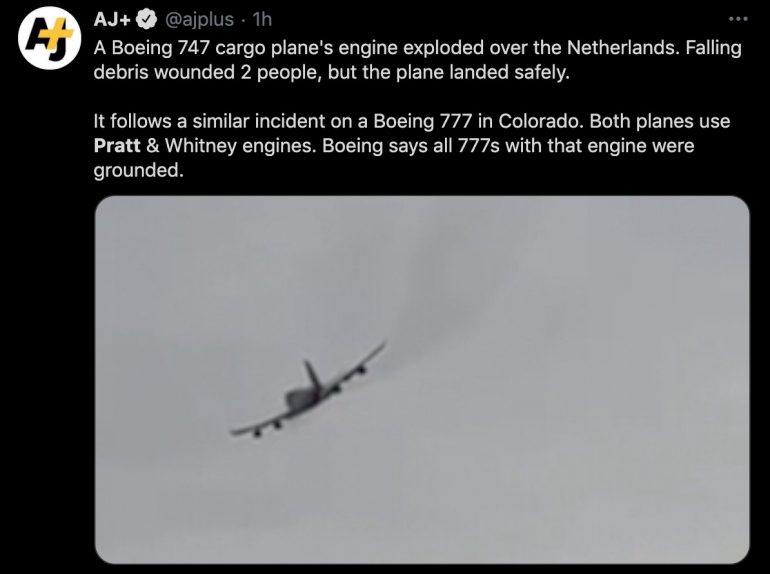 Both flights involved Boeing jets, and Boeing has identified the particular engine type and has recommended all planes with a Pratt-Whitney engine to be grounded until they can be properly inspected.

The airline said it will continue discussions with US regulators ‘to determine any additional steps that are needed to ensure these aircraft meet our rigorous safety standards and can return to service’.

It came after the Federal Aviation Administration (FAA) said it would require stepped-up inspections of 777 aircraft with Pratt & Whitney PW4000 series engines after the right engine failure on United Flight 328.

In a statement released Sunday evening, FAA Administrator Steve Dickson said: ‘After consulting with my team of aviation safety experts about yesterday’s engine failure aboard a Boeing 777 airplane in Denver, I have directed them to issue an Emergency Airworthiness Directive that would require immediate or stepped-up inspections of Boeing 777 airplanes equipped with certain Pratt & Whitney PW4000 engines.

‘This will likely mean that some airplanes will be removed from service,’ he added.

Dickson said that his team has ‘reviewed all available safety data following yesterday’s incident,’ and ‘based on the initial information, we concluded that the inspection interval should be stepped up for the hollow fan blades that are unique to this model of engine, used solely on Boeing 777 airplanes’. –DailyMail

Remember how we opened this story about having confidence that your pilot and flight crew are trained for an emergency like this one?

The incident forced the pilot to attempt an emergency landing back in Denver just 20 minutes after take-off, at around 1.30pm local time.

Video recorded aboard Flight UA328 captured the moment it touched back down on the runway safely, prompting the cabin to erupt in applause and cheers of relief.

Remarkably, there were no injuries reported either on board the flight or on the ground. – DailyMail

That’s some badass training. Our hat’s off to you. Speaking of badass…