Blaming ‘oppressors’ and siding with ‘victims’ is the engine of her political machine. When her claims of being a ‘victim’ fall apart… it hits her like Kryptonite.

Alexandria Occasio Cortez is used to having her name trending on social media. But this time, she’s on the receiving end of public scorn. And she has nobody to blame for it but herself.

AOC has been milking the whole January 6th riot for everything it’s worth. She’s afraid for her life, she’s seeing white supremacists under every bush, blah, blah, blah. When Ted Cruz retweeted a comment of hers about Gamestop that he agreed with, she responded with her typical ‘nuanced’ version of ‘bipartisanship’:

She spoke with outraged concern about a second Capitol Police officer who succumbed to injuries sustained that day. And yet, is this any way to talk about the group which defended lives like hers with their own?

“I thought I was going to die,” Ocasio-Cortez said. “I have never been quieter in my entire life.”

One of her staffers then told her it was safe to come out, she said. That’s when she saw the man who came in was a Capitol Police officer, whom she described as a “white man in a black beanie.”

Ocasio-Cortez said her staffer, whom she identified only as “G,” felt the same way.

“We couldn’t tell, we couldn’t read if this was a good situation or a bad situation,” Ocasio-Cortez said. “Like so many other communities in this country, just that presence doesn’t necessarily give you a signal if you’re safe or not. So the situation did not feel OK.” –JustTheNews

It always comes back to race with her, isn’t it? That white officer just couldn’t be trusted. She disparaged the Officer whose job it was to escort her from that office to a secure location. But she couldn’t help but project ill-will into his intentions. This from the same person who gladly uses the deaths of two Capitol Police as a prop she can leverage for moral authority in a political argument. Way to keep it classy, Alexandria.

She’s something of a drama addict, and she hasn’t been getting her fix lately, so…

Next came the part where she told the world that she was right there in the thick of the drama, that the bloodthirsty crowd could have busted into her office at any moment, and she barely escaped the grasping fingers of a bloodthirsty crowd who would gladly have murdered her on sight … blah, blah, blah. You’ve heard it all before.

Sorry to say, AOC wasn’t actually close enough to the action to BE in any danger. But for someone who’s basically Avenatti in red lipstick, riding out a lightning-rod story in relative safety while all the action happened would mean she misses out on the most politically-opportune news story of the forseeable future. It’s basically her version of ‘Selma’ and she missed out.

So, not unlike some teenage boy bragging about his girlfriend from Canada, she ‘reframed history’ with some creative embellisments. But she got caught. After getting called out, she tried to move the goalposts and say she wasn’t really lying.

The map told us differently.

Even Big Tech tagged her as ‘misinformation’. 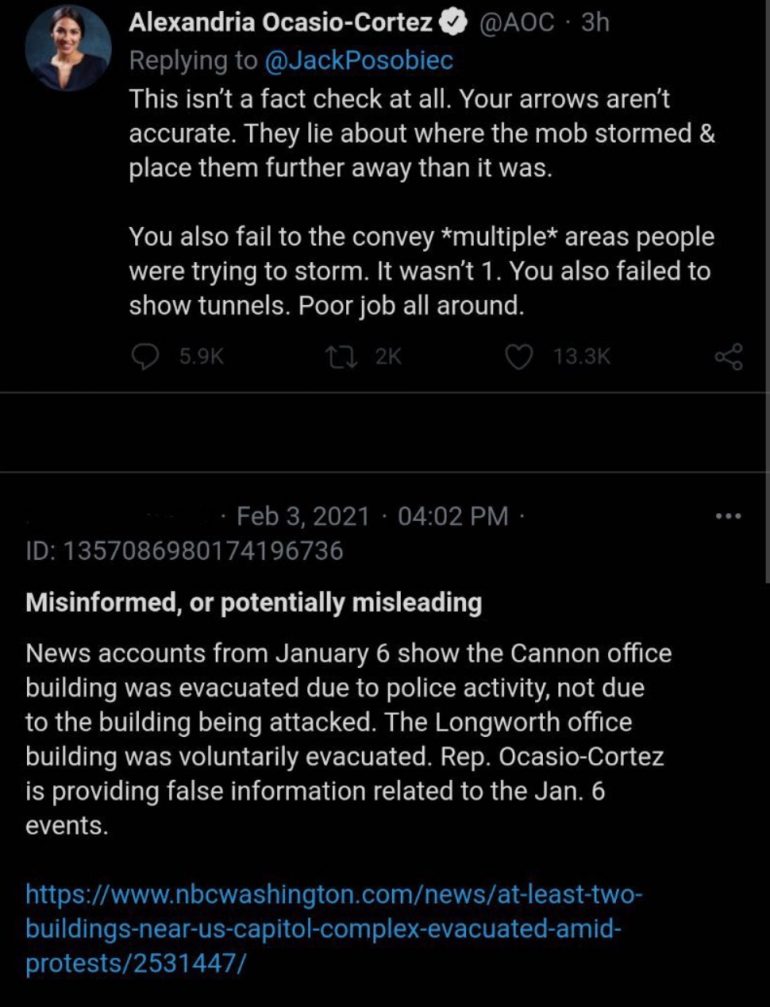 According to the mainstream media summation of AOC’s story, AOC was at the Capitol as armed insurrectionists stormed the halls, those insurrectionists nearly breached her office, and she had to literally run to another building in fear for her life.

The truth is, as our Nick Arama and other journalists have detailed, that AOC was not in the Capitol and hadn’t been there for at least an hour before the Capitol Police officer knocked on her door, according to the video. The truth is that AOC was in the Cannon House Office Building at the time she was evacuated, which is a bit of a walk (or subterranean walk/train ride, depending upon the path one takes) from the Capitol. According to Rep. Nancy Mace (R-SC), whose office is two doors down from AOC’s, the truth is that “insurrectionists never stormed [their] hallway.” —RedState

Here’s footage of what was going on when the offices in her building were being evacuated.

AOC’s office building being evacuated at the exact time of the riots happening across the street at the Capitol.

How did she ever manage to survive? pic.twitter.com/YgBpYdCRR1

Not being the center of the story is NOT a helpful narrative for someone whose entire grift requires publicity whoring off of a perpetual victimhood narrative.

What did she do when she was called out? She tried to move the goal posts, creatively change the facts to allow her to cash in on the victimhood equivalent of ‘stolen valor’, while slandering her critics in the process.

Back to AOC’s first tweet in the thread. Bombs planted by Trump supporters surrounded their offices too? We were only aware of two devices, one at the DNC and one at the RNC. As Nick described in another article addressing AOC’s attack on Nick and RedState, those offices aren’t adjacent to Cannon, are more than a block away from Cannon, and there is no evidence that Trump supporters planted the bombs. —RedState

She, a sitting legislator, tried to whip up a cancel culture mob to destroy those who had dared to challenge or criticize her public comments… while inviting them to pressure big tech to deplatform her critics.

Her team sent out an email blast. Here are some excerpts:

As we speak, right-wing operatives with millions of followers on social media are spreading flat-out lies and misleading information about Alexandria. But with your help, we can force Twitter and Facebook to take action and enforce their own rules.

…We need your help. Here’s what you can do — to help us combat this campaign of disinformation and others in the future:

Scan your social media to find posts with this misleading information, especially those using the trending hashtag. Don’t tweet any hashtags yourself, because we don’t want to spread them further!

Identify any posts that are threatening or harassing and use the built-in report features to flag them for moderators. Facebook and Twitter both have built in tools for reporting posts and tweets that break the rules.

…So, if you can, help us scan social media tonight and report those spreading this disinformation campaign.

Thank you for all you do, Team AOC —RedState

She wants to use Big Tech to censor voices critical of her hypocrisy.

Maybe this is the reason why…

Most likely, it’s the devastating power of the mocery in the memes now lampooning her lies. 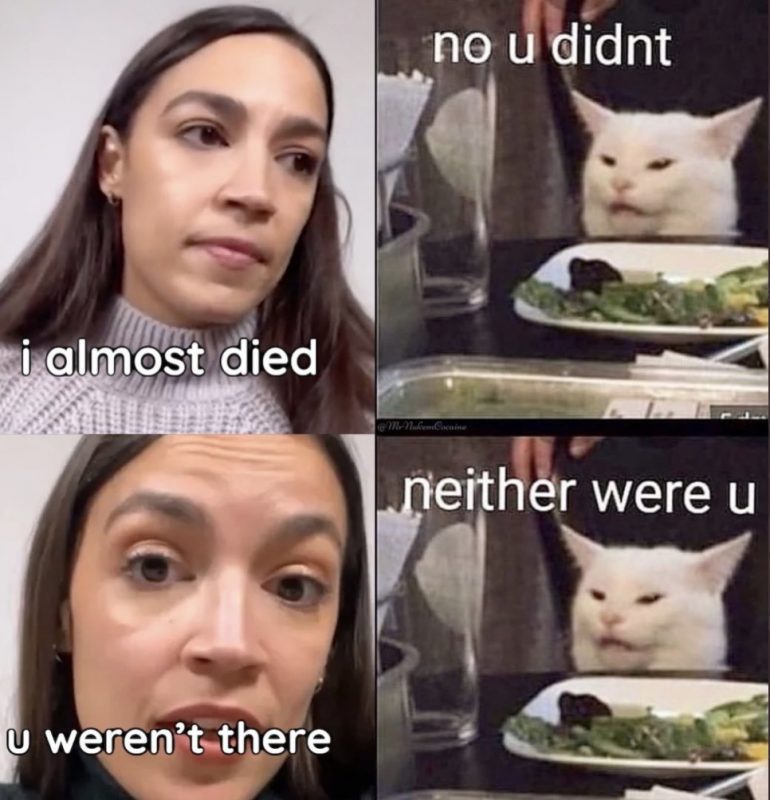 Congrats, Alexandria. You just played yourself.

You should find yourself some better role models.

Try these ones, they’re timeless.