When you can spot serious differences in how similar events are portrayed by the media, you can see how those events are being used to manipulate the audience.

We have, for example, different events where law enforcement has been involved in a shooting with an unarmed citizen.

In some situations involving deadly force, law enforcement was given the benefit of the doubt, in others the worst possible motives have been assumed — regardless of the facts involved.

What sets the stories apart? By all appearances, it’s nothing more noble than an editorial decision of who the write has determined to frame as ‘good guys’ and ‘bad guys’ in the narrative.

On January 6th, for example, Ashli Babbitt was shot dead by law enforcement in the now-infamous confrontation within the Capitol complex. At the time she was shot, she was unarmed at the time.

An investigation followed as it should in all such situations. The officer responsible for firing the shot that ended her life will not be recommended to face criminal charges.

It was always felt unlikely that the officer, who was in the last line of defense between the rioters and the politicians huddled inside, would be charged.

Federal prosecutors must be able to prove not only that an officer used excessive force, but also that the officer willfully violated someone’s constitutional rights.

…The officer who fired the deadly shot told investigators, according to The New York Times, that there was utter confusion at the time, and he feared the rioters were about to access the chamber when he pulled the trigger.

…The officer who shot at Babbitt has told officials he did not know if any of those in the crowd were armed as he fired his single shot.

He also said he had no advance planning on how to deal with such a charge on the building. –DailyMail

The shooting was investigated, found to be justified, even though Babbitt was unarmed, and no charges are recommended. We also note, his name was not publicized, and his personal life therefore was not forever tainted by the unfortunate incident.

When her death was announced, the internet swarmed with ghouls cheering her death. No civil rights grifters claimed she had been murdered in cold blood by the ‘Blue Klux Klan’, or equivalent incendiary comments. Even public figures were seen dancing on her grave on social media while praising the courage of the building’s defenders.

No public figures denounced law enforcement for the incident. Pelosi never called them ‘Gestapo’. Neighborhoods were not put to the torch. Nobody responded with violence or angry Defund-the-police style protests.

Contrast that to other police-involved lethal force encounters. More specifically, look at some events cited by marchers and rioters through the summer.

When Jacob Blake was shot by police, and Kenosha went up in flames, investigators came to a similar conclusion — charges would not be pressed against either the officers involved or against Jacob Blake. That didn’t stop public figures and some in the media from proclaiming that was irrefutable proof of an unfair system.

In the death of Breonna Taylor, evidence shows that the police had announced themselves before entering, that the boyfriend was the first to open fire, and that one officer was hit in the firefight. But this was still portrayed as the slaughter of an innocent woman, and evidence of racism. Hers is one of the names frequently cited during the riots of 2020.

Rayshard Brooks resisted arrest, attacked the police, stripped the cop of a weapon, aimed it at the police, and fled the scene. He was shot and killed. Riots sprang up in Atlanta and beyond. Many in the press immediately took sides and jumped to the assumption that this was clearly a racist act by a bad cop… even before any of the facts had come to light.

The death of George Floyd — which everyone agrees was harrowing to watch — was the flashpoint for the summer’s riots. But with all the verious variables involved, including the dangerous dose of Fentanyl that blood toxicology indicated, make public assumptions that the fatal outcome was due explicitly to the alleged ‘police brutality motivated by racial animus‘ an as-yet unproven allegation.

Some years ago we saw the same kneejerk media response where CNN hosts augmented the activist propaganda pressure by joining with the ‘hands up don’t shoot’ catchphrase. 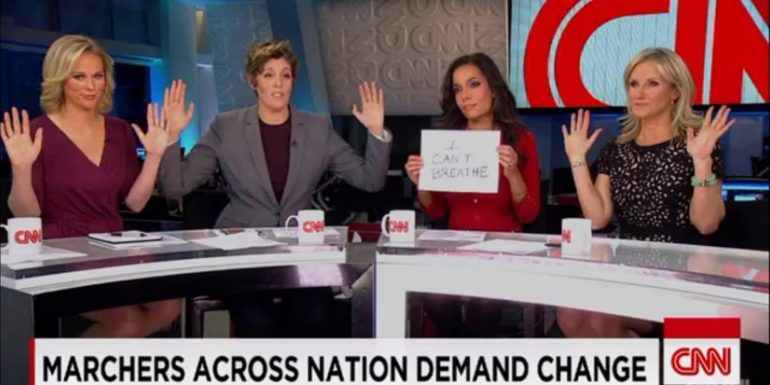 What’s wrong with that catchphrase? It was based on a lie, that Obama’s own state department disproved by way of an autopsy. Even WaPo published evidence that contradicted the basic premise on which the narrative was built.

Stories like these were woven together to frame a dangerous narrative that society had declared ‘open season’ on one demographic by a group whose job it is to uphold the law in dangerous and uncertain situations. This narrative has led to a distrust and contempt for law enforcement officials and an environment in which hundreds of law enforcement members being hurt in public clashes, as well as numerous incidents in which they have been maimed, or sometimes even murdered.

If objective statistics had been reported ad nauseum, instead of the activist narrative, the summer of 2020 might have looked completely different.

The facts of the DC riot use of force incident can be reported simply, and without emotional overtones: law enforcement responded with lethal force to the threat of a breach of a secure area within the Capitol, where an unruly crowd could have spilled into the secure area. An investigation has not recommended charges for that use of force.

Imagine if ALL lethal force incidents were handled with that even-handed tone.

The next question to ask is why they are NOT being handled that way by the major networks. Who benefits, and what is the motivation?

Ted Cruz Excited CPAC Crowd With Speech About Future Of Trump And Future Of GOP (VIDEO)
February 26th, 2021 The Lid